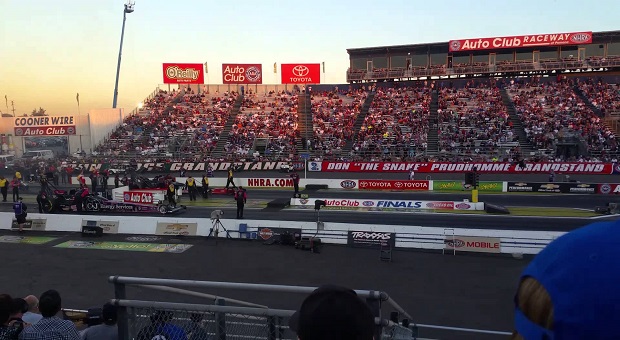 As the NHRA Finals at Pomona draw closer, the leading drivers in the four categories each have their own distinct attitudes. The finals will take place Nov. 10-13.

Antron Brown, who has already secured his second consecutive and third overall NHRA Mello Yello Drag Racing Series Top Fuel world championship, doesn’t intend to rest easy on his inevitable laurels. On the contrary, he has every intention of putting just as much effort into the final race at Pomona as into his previous races this season.

“We can get out there and have some fun, try to break some world records,” he said. “We went out there last year, and we lost in the final, and we were sore about it! When you have a race, you can’t get that race back.”

Brown credited his team for this season’s success.

“You never hear me say ‘me,’ because it’s not just me, it’s we,” he explained. “I’m just the guy who gets to step on the pedal. I’m fortunate to be on a team that has this talent. Good doesn’t cut it in drag racing, because you don’t get a second chance. You need great people.

Ron Capps, points leader in the Funny Car division, is not going into Pomona with a guaranteed win, and his prudent attitude fits the situation well.

“It’s not over,” he said. “We still need to get out there, and do our business to clinch it. Gosh, a lot of people are thinking it’s sewn up, and I keep holding my hand out, saying, ‘Not yet!’ You don’t want to assume anything. To me, I’m trying to go up and do the same thing I’ve done for 19 years. I want to go up there and not let the team down.”

He said he relies on that sense of repetition, of history, to help get into the mindset to win.

“It’s not really superstitious, but I just try to do the same thing every time. Same handshakes, I try to put my left glove on first every time… Obviously I had a lot of anxiety in Vegas, so doing the same thing really helped me, especially race day – I could go up there and think of it as just another run.”

Greg Anderson is leading by 19 points in the Pro Stock division. The runner-up is his teammate Jason Line.

“I don’t really think anyone can catch Jason for the title except me, and I can be caught from behind as well,” he stated. “It’s gonna be cool either way it goes down here.”

Anderson has been through some serious medical struggles since last winning a championship; he underwent major heart surgery and was unsure if he would be able to race again. This only adds to his enthusiasm about the potential to win the championship.

“It would be historic,” he said, referring to the possibility of his victory. “It would be the coolest thing in my career.”

The last category, Pro Stock Motorcycle, currently has a tie for the lead between Andrew Hines and Eddie Krawiec. The two Screamin’ Eagle Vance & Hines Harley-Davidson teammates shared a similar view of the series up until this point.

“We’ve probably won four or five races between the two of us that we shouldn’t have. We didn’t have the fastest bikes. It’s frustrating that we can’t have the quickest bikes all the time, but it’s nice that we can help out the team with reaction times,” Hines said.

Both drivers look forward taking one another on in the final.