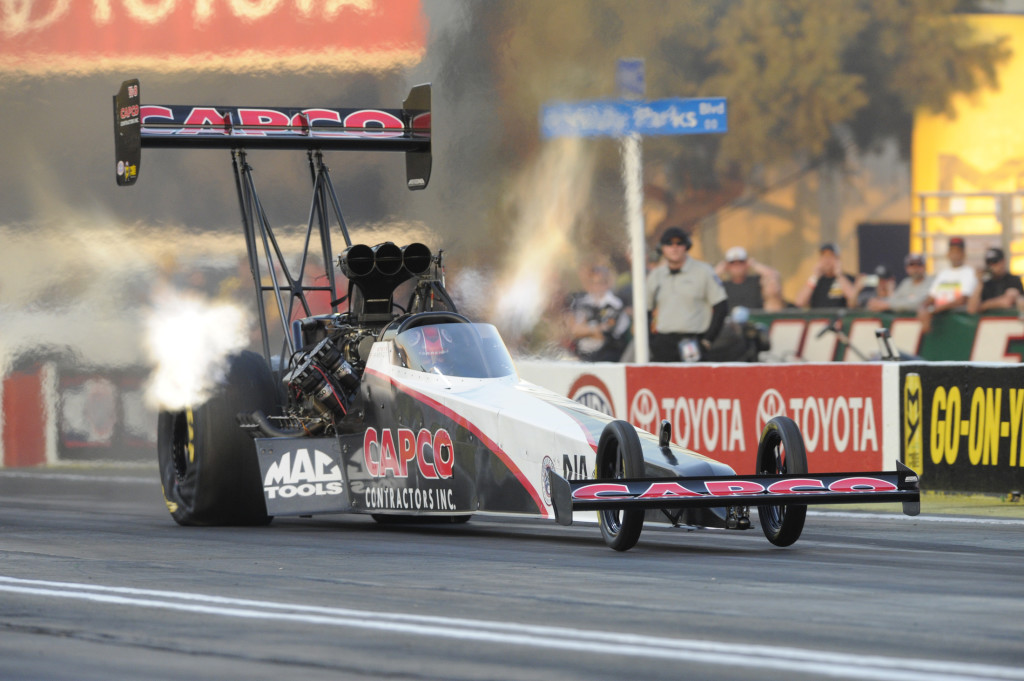 Top Fuel driver, Steve Torrence was feeling a sense of relief after winning the season-opening NHRA Circle K Winternationals at the Auto Club Raceway at Pomona. The smile on Torrence’s face in victory lane represented that his CAPCO, Inc. / Rio Ammunition team was picking up right up from where they left off from last season. Which was the most important thing that was on his mind after seeing the win light.

“That’s a huge step in the right direction,” said a happy Torrence. “It’s kind of a breath of fresh air from the year’s past. Our Pomona performance hasn’t been all that stellar. It’s a huge vote of confidence going into the season with a car that you know was dominate in the opening race, through qualifying, and through eliminations. It’s just a testament to the hard work and effort the guys have put in during the off-season. You know we ran well at last year’s Finals and to come back out at the Winternationals and to have a good car like that was just, just unbelievable. I thank Richard Hogan (crew chief), Alan Johnson (team advisor) and Bobby Lagana (assistant crew chief). All those guys worked their tails off to get it there and I’m glad that’s it showing.” 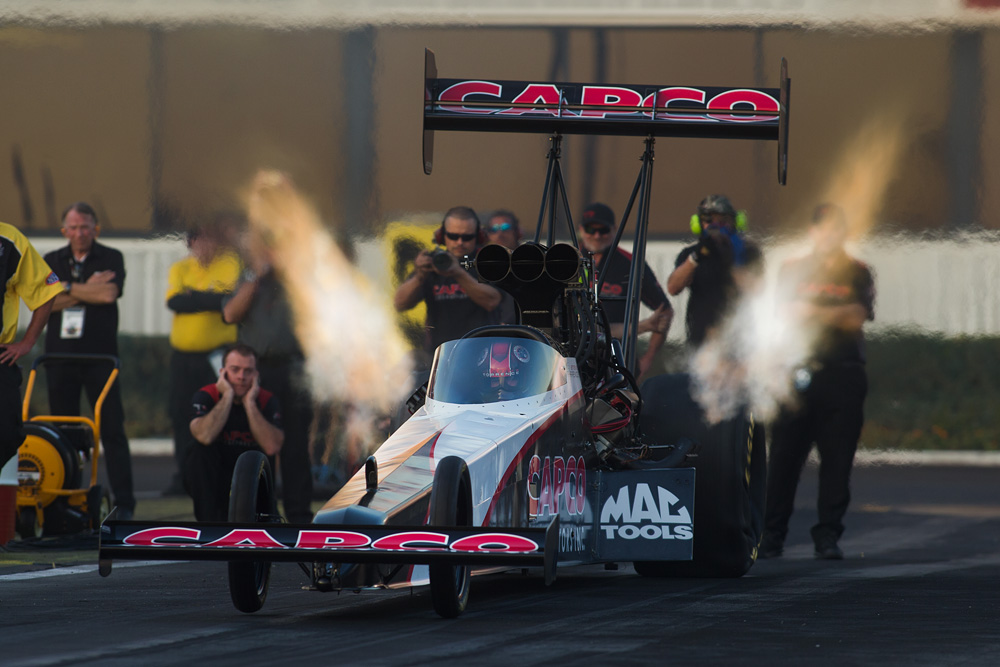 Just qualifying alone was enough of a dogfight to give teams some comparable insight against their competition. Torrence reeled off some mid 3.70 runs in the early rounds but saved his best for the last session on Saturday running the eighth quickest elapsed time in the history of the sport to take the No. 1 qualifying position at Pomona with an elite 3.703-second pass. “If qualifying is any indication of what the season is going to be like, we’re up for the most competitive season, yet,” stated Torrence. “The parody of the class is right there and everybody is really strong. To be able to run at the top of the pack was gratifying, but it’s going to be a tough season. We were 3.70, Kalitta 3.71 and there was a handful of 3.72s and 3.73s stacked on top of us. It’s going to be tough.”

Torrence will be quick to tell you that he’s in charge of the driving part of it, but will share his appreciation of his team headed by Richard Hogan and Bobby Lagana. With the advice of veteran tuner, Alan Johnson as Torrence would say ‘puts a thorn in Hogan’s side to get him to push the tune up a little further over the Pomona weekend.
“That really is the scenario right there,” said the six-time Top Fuel winner. “We haven’t changed anything since Alan has come on board. We have run AJP parts from day one. We didn’t change anything, didn’t change the tune-up either. We have become just a lot more aggressive. That’s what Alan has done. He gives Richard a little sense of confidence and pushes him to that next level. That started to show at the end of the season last year. I think we went 3.71 at the Finals, which was then a career best for me. When we left there, we had one of the most dominant race cars at the end of the season. So, when we came back out, we continued to pick up right where we left off. The chemistry between those two is even better this year. You had in the offseason a lot of phone calls and communication going between them. It’s basically is that exact scenario when Alan has that little guy on his shoulder that’s said to him, go a little more, go a little more and it’s paying off.” Of course, knowing what’s behind you in the engine department when it’s working so well only builds Torrence’s driving trust in his car. Now he can focus on leaving a little quicker than the other lane and clearly focus on his upcoming round. 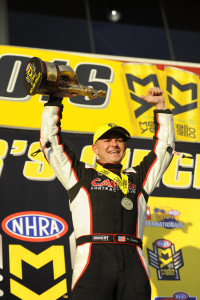 “When you go up there every lap, go down the track, and you don’t smoke the tires, and the car is running fast just adds a lot of confidence,” said Torrence. “You go up for race day and it just continues to build. It’s like stacking cards, you get more and more on top of each other and you just keep going. As the consistency of the car picks up and the performance picks up my driving picks up also. I’m looking forward to it and feel I have a pretty confident attitude going into Phoenix. We’re still humble, but that’s what NHRA Drag Racing does to you. It’ll take you from hero to zero real quick and all we can do is the best we can.”
Normally, with that kind of confidence could have a team sitting back enjoying their laurels, but that isn’t slowing the CAPCO, Inc team down for a moment after the onslaught on the National ET Record being assaulted weekend after weekend last year; Torrence feels certain teams, including his, will go quicker in 2016.
“Hey, there was a handful of them running that last year and at Brainerd, (Shawn) Langdon went 3.66 right beside me and I had a front row seat to that. I went 3.73 or something and felt like my car was broke. I think there’s a potential for that. We went 3.70 flat in the opening race of the season. I think we can build on that and the other teams will as well.”
A new rule change for all the professional categories in 2016 now states that a National Record can be set on only one pass rather than a one per cent back up to make it official and the 20 bonus points for the feat has been eliminated. 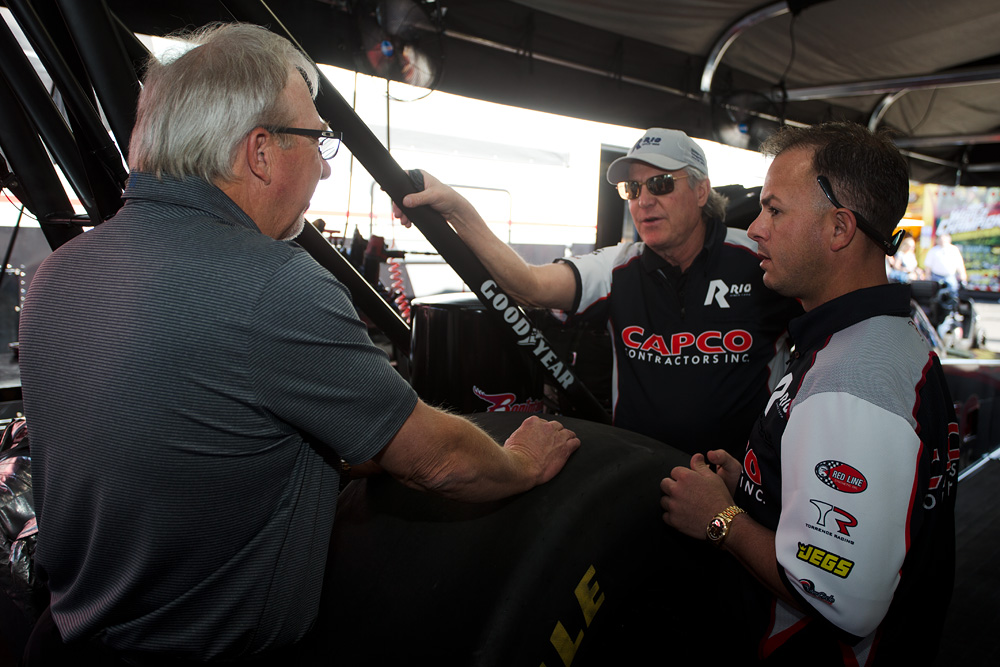 “I got asked that question a couple of times at Pomona and I’ll give you the same answer I gave them,” said Torrence. “Before I never really had to worry about it because I wasn’t ever the quickest, so we didn’t have to be concerned about setting a National Record then. Now that I feel, we’re at that level. I wish we could do something with those 20 points because there’s no incentive to go out and go quicker than a 3.68 right now. You can get bragging rights. You don’t get anything for it. It was pretty interesting last year to see how much those 20 points came into play. Of course, there were a couple of changes over there in Funny Car making them run quicker and quicker. I would kind of like to see that setting a record would carry some weight.” 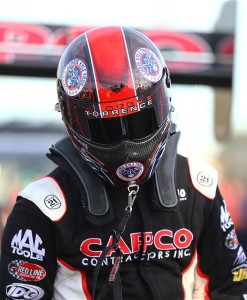 Now the NHRA Mello Yello series moves on to Phoenix this weekend for the season’s second race, the CARQUEST Auto Parts NHRA Nationals at the Wild Horse Pass Motorsports Park this Sunday and how does Torrence feel about his chances this weekend going into the event.

“We’re the only guy in Top Fuel in 2016 to hold up a golden man right now,” Torrence said gleefully. “Hopefully, we can keep it that way. We were out there during the Phoenix test and the cars kept getting quicker, quicker, and quicker. We left before it got real good on Friday afternoon. Those cars are running great and I’m looking forward to it. It’s going to be abnormally hot for the conditions that we are going to see in February and different from anything we’ve seen in the past, I think.” The NHRA CARQUEST Auto Parts Nationals can be seen on FOX Sports 1 on Saturday, February 27, at 10 p.m. EST for qualifying highlights. The race will be shown LIVE on Sunday, February 28, starting at 5 p.m. EST.