RacingJunk News > Racing > Drag Racing > Looking Back at the Winternationals 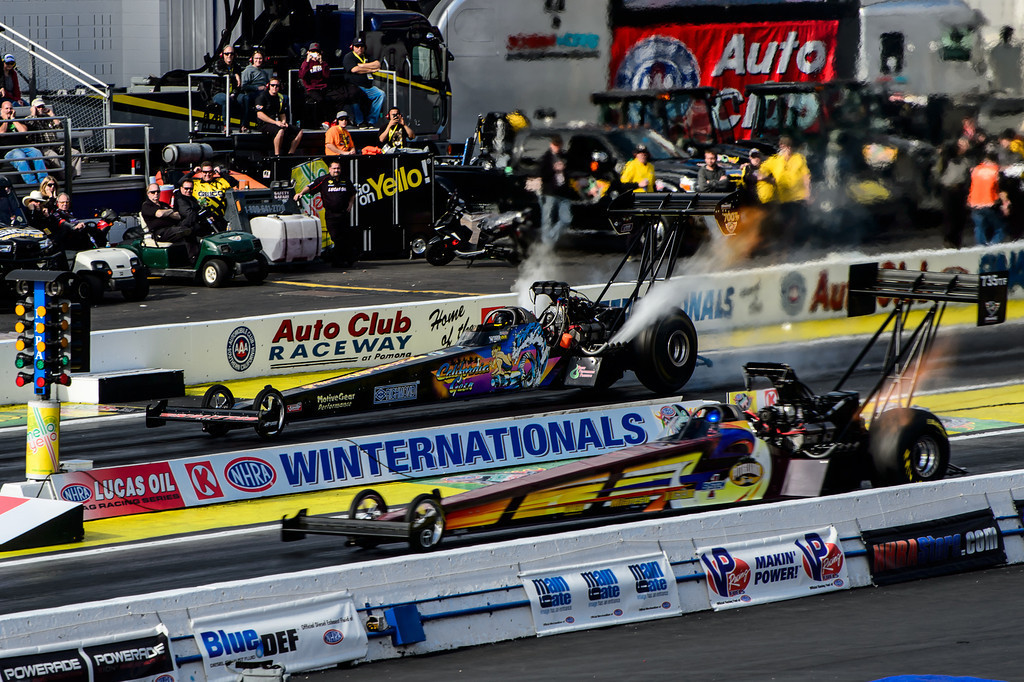 For years the impact and legacy of one of NHRA’s premier events, the Winternationals, has grown from humble beginnings to the ascension of the highest of highs with spectacular happenings that only adds to its reputation and the world. Long before live television and the Internet, the news coming from the media and alike in the 60s was sporadic at best and sometimes just plain hearsay by the time it reached the east coast drag racing fans.

It all added to the mystique of the race and being NHRA’s second National event starting in 1961, it cranks up every NHRA season. While other parts of the country are locked in the throes of cold, the enticement of sunny California is a strong pull.

In those early days, it was monumental that every driver and team were out to prove they were the ones to beat and victory meant instant recognition around the drag racing annuls and the rest of the country.

Southern California was a hotbed of street rods and the lure of high performance engines was too much to resist and that’s exactly what NHRA Founder, Wally Parks found going around the Los Angeles suburbs and saw a need to organize the sport.

Pomona Raceway, now the Auto Club Raceway at Pomona, was Park’s canvas to paint the sport he envisioned.

Few folks remember in 1952 that it was the car club called the ‘Pomona Choppers’ along with the local Pomona Police department of Sergeant Bud Coons and Chief of Police, Ralph Parker that paved a part of the LA County Fairplex parking lot to make an 1/8-mile ribbon of asphalt.

This quickly through their efforts gave local car clubs a place to race and an alternative to the preliminary street style racing that cost many lives. It was how their contributions changed the sport and will always give Southern California the tag of the home of drag racing.

1965  brought so much notoriety to the sport and Pomona when Don Prudhomme defeated Bill Alexander in Roland Leong’s Top Fuel Hawaiian dragster that was seen on ABC Wide World of Sports. Although airing a couple of months later, the stage was set for these two, all from winning the Winternationals. The power of TV turned ‘The Snake’ into a household name and he and Leong campaigned the summer match racing circuit, bringing the duo back to victory lane and taking the U.S. Nationals on Labor Day to further these two’s legacy both becoming drag racing’s icons.

The lifestyle of hot rodding in the 60s changed American culture in music and fashion and the Detroit auto manufacturers took notice. The circumstances of aftermarket products only surged sales from major factories in Michigan and it didn’t take long for Ford, Chevrolet, and Chrysler to show up with their factory assistance at the track making alliances.

The term ‘Win on Sunday, Sell on Monday’ was exactly what the factories loved hearing and once again Pomona Raceway played its part and was there at the forefront for the first Pro Stock race between the Hall-of-Fame’s Plymouth of Sox & Martin against Grumpy Jenkins’ Chevrolet.

Newspapers played up the factory matchup for weeks with the race’s outcome dominating the motorsports world. It was car brand against car brand and the Winternationals was always a standard in months of advertisements in popular hot rod magazines and race publications and was spread around even more by word of mouth. In those days, the next NHRA event was in March in Gainesville, Fla., so at Pomona racing had the perfect stage of putting car companies against each other in a format that clearly showed the dominance of a certain brand and most important, winning and Detroit ran with it with the space offered between months. 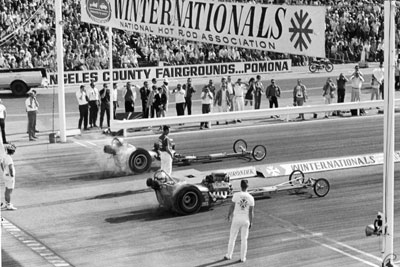 In addition, at that 1970 Winternationals in bigger news, Big Daddy Don Garlits suffered a terrible clutch explosion that removed part of his foot. The serious injury didn’t stop Garlits from still working. All that time spent in the hospital recuperating, Big Daddy’s mind was figuring out how a rear engine dragster would work. It took him a year to get back, but when he returned in 1971, he set the drag racing world on its ear, not only winning, but in the only rear-engine dragster of its kind that got even bigger headlines across the country all from where he broke through in what is now today’s Top Fuel dragster.

The years were reeling in the 70s when the gas crisis suddenly surprised American and motorsports was left scrambling to find any monetary support in the business. Having a Southern California base of drag racing teams and surrounding speed shops grew, pointing to a resurgence of the sport. It was out of the small race shops that kept innovation spurred on with constant improvements to the engine and car with Pomona being the place to race with escalating speeds and quicker times at that time. 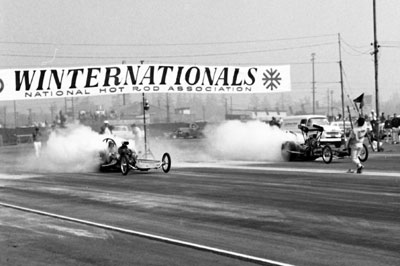 With the growth of Southern California expanding, it was during this era of the 70s and 80s that better statistics were kept and the revelation of find out the economic impact of an event like the Winternationals brings to the immediate area and surrounding communities. In today’s concept of a major event, the Winternationals bring in roughly around 100,000 spectators for the three days of racing. It’s this kind of entertainment venue that is an important component to the local community and the quality of life in cities and states. Urban sprawl has taken away so many of the Los Angeles raceways, with Riverside, Ascot Park, Saugus Raceways all going by the wayside, but Pomona has stood the test of time.

The direct annual economic impact is the sum of the estimated spending by out-of-state visitors, out-of-county (but in state) visitors, and retained in-county visitors that make a successful event. It relates to restaurants, hotels, convenience stores, and gas stations and the more people attending the more they are spending.

The draw of the Winternationals has had plenty of exciting moments that fans have come to expect. The time Kenny Bernstein came to the rescue of his fellow Texan when Raymond Beadle’s Blue Max Funny Car had his roof fly off in the semi-finals, leaving Beadle having to cut off the roof of the Budweiser King Funny Car and attach it to his own car to be able to make the finals against Bill Meyer in 1981.

Eddie Hill’s major flip over in 1989. The popular win of Frank ‘The Beard’ Bradley’s Top Fuel dragster in 1991, Kenny Berstein’s crash and rollover in 1993 against Joe Amato in the finals and the tremendous celebration that Snake Racing experienced in 1998 when Larry Dixon won Top Fuel and Ron Capps in Funny Car all happening at the NHRA Winternationals.

At the turn of the century, we saw the emergence of a young upstart, Darrell Russell, win in 2001 replacing the legendary Joe Amato. Melanie Troxel began her string of six consecutive final rounds starting at Pomona. Local favorite Morgan Lucas defeated Shawn Langdon in 2011 in front of numerous California fans. 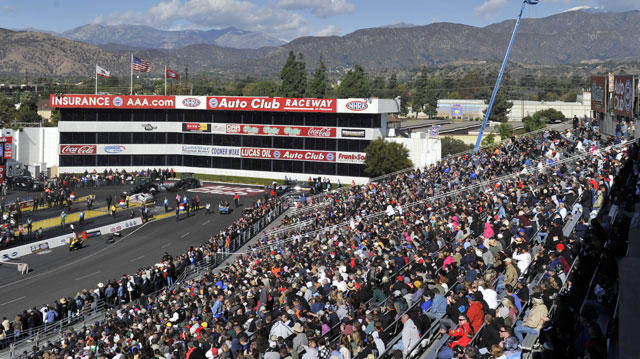 The Winternationals has always been an attractive lure to get drag racing fans traveling westward to see the new cars, teams, and drivers, especially with the promise of warmer weather.