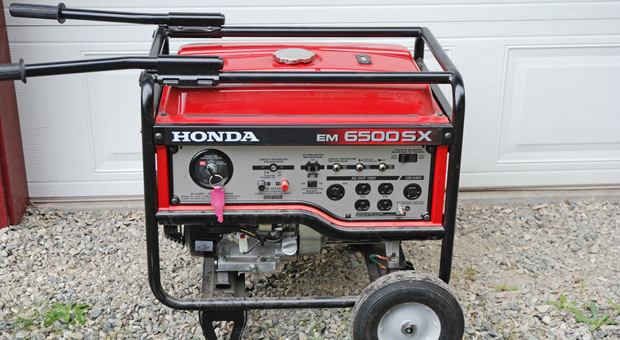 Get a Charge out of This: Picking The Right Generator, Part 2

In part one, we began our investigation into generators. If you missed, the first segment covered power output – specifically, the amount of watts you need to run some pretty basic electrical equipment.  This time around, we’ll dig deeper into the features you should look for.  You’ll get a charge out of this!

Most often, small generators have shorter running times than their bigger brothers.  In other words, they’re likely to run out of gas in less than two hours.  On the other hand, larger units can run constantly without overheating or running out of fuel for ten hours or more.  Some generators are of the four stroke variety while others are two strokes.  Two stroke motors always require oil mixed with the fuel (either by automatic injection or mixed directly into the gasoline).  While this might seem like a pain, two stroke generators are often lighter and feature more horsepower per pound than their four stroke counterparts.  Take your pick, but I’d lean toward the oil injection models when it comes to portable two stroke generators.  Naturally, if no-fuss operation is in your game plan, a four stroke powerplant is the only way to go.  Besides, a good four stroke combination will feature electronic ignition to ease starting and to reduce maintenance (if you’ve ever tried to start a two stroke with fouled spark plug(s), you’ll know what I’m talking about).   Similarly, a good four stroke generator will include an automatic shutdown feature which stops the engine if the oil level falls too low.

Making Peace With Your Pit Neighbors

Noise is a problem that you should also concern yourself with.  Simply stated, some generators are very loud.  Other’s aren’t.  Think about working on your car in the pits while a two stroke chain saw buzzes in your ear at wide open throttle.  It’s not a pleasant thought and one which can prove to be equally annoying to other racers.  Because of the noise factor, take the time to listen to several generators while they operate at wide open throttle.  Buy a well muffled job.  You won’t be sorry and neither will the other racers who pit next to you.

Some generators come equipped with automatic circuit breakers.  Other models do not have this feature.  It’s a good idea.  And it works just like the system in your house or shop:  If a circuit is overloaded, the breaker trips and shuts down the power.  If a generator doesn’t have this feature, you run the risk of overloading the equipment.

Of course, there are myriad options available when it comes to portable generators:  Electric starters, two and three wheel dollies, spark arrestors, CD or electronic ignition systems, varied circuit breakers, automatic voltage regulators and an almost endless list. Larger capacity generators (the type which are permanently mounted in the trailer) are available with liquid cooling.  A number of liquid cooled generators feature automatic shutdowns which operate when the water temperature becomes too high.  On a similar note, larger generators are also available with electric start.  Even some small generators feature option electric starters.   Many generators are also capable of handing both 120 and 240 V outputs.

The bottom line is simple:  Shop carefully before buying a generator.  The market is loaded with hundreds of different generator styles and formats.  Just remember to purchase a unit that serves both your present and future needs.  Buy the unit that suits your present and future needs.  You’ll never regret it…..and you’ll always have power on tap.