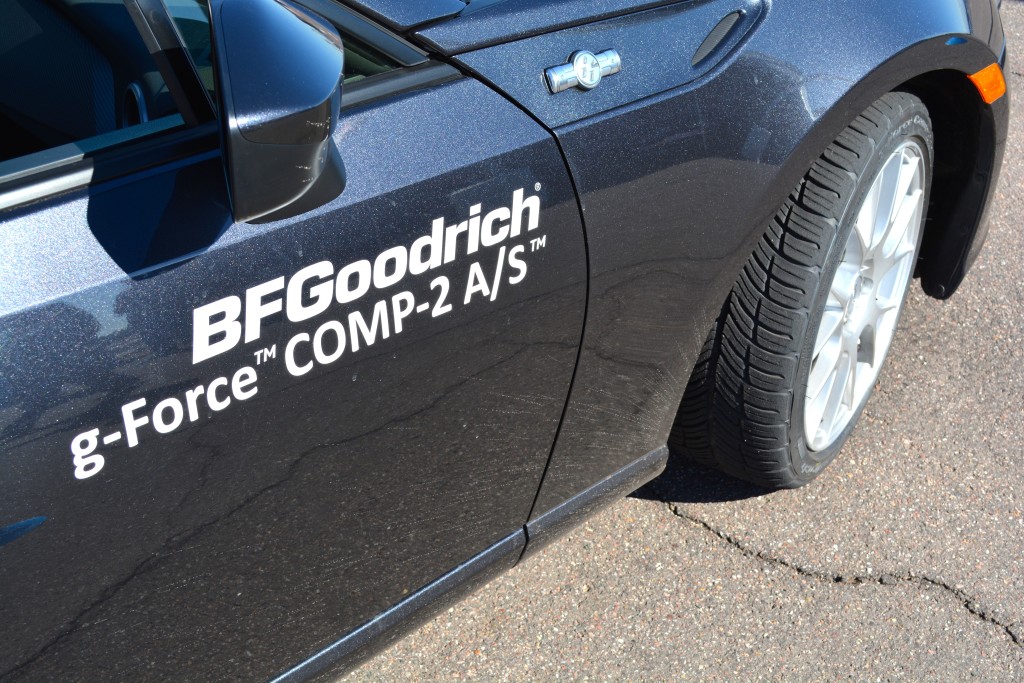 “We’re going to make sure you know your ABC’s,” the folks at BFGoodrich stressed as we stood on the track, waiting for fog to burn off an unusually brisk Phoenix, AZ morning at Wild Horse Pass Speedway. “The ABCs for the Comp-2 are: A – Accelerates Faster, B – Brakes Shorter, C- Control in All Season. Remember them when you drive, and tell us what you think.”

The assembled auto journalists were there to get wheel time on the newest BFG high performance tire, and the lingo had less to do with literacy than the education campaign surrounding the newest baby in the BFGoodrich lineup: the g-Force COMP-2 All Season.  Emphasis for this high performance all-season slick is on going fast, stopping hard, and excelling in range of weather and conditions for vehicles, and owners, that would normally dismiss an all-season as an undesirable jack of all trades, master of none.

BFGoodrich is banking on the public perception of a company willing to back their race tire claims up with street tire performance, and giving this A/S a try, and based on performance, we’re quietly giving that notion a thumbs up. In the 1970s, BFG was known for racing on the same tires it sold the public. The reputation for quality and performance that has lingered on the track and street is bolstering the company’s new lines, including the Comp-2.

It’s a smart campaign for a smart tire, and when we got behind the wheel we had a chance to test out these ABCs and see if that lingo translated into something that made sense for the high performance aftermarket. Were these truly going to be the tires that would let you drive your new Mustang in the snow? Well, yes. Sort of.*

*(Despite the repeated questioning by one of the assembled journalists, no one is recommending you test out these slicks on your Hellcat on the record-breaking snowfall in Massachusetts. Many of us might have thought that self-explanatory, but the BFG reps  patiently confirmed that all-seasons are designed for meeting NORMAL changes of condition and temperature. Not freaking freak snowstorms. Do us all a favor: keep your horsepower leashed in the blizzard no matter what kind of tires you’re riding on!)

So how did the tires test? Impressively. Dry and wet autocross turns in a Scion FRS and 2015 Ford Mustang V-6, respectively, gave me both a strong sense of surety on the Comp 2 and a little fear of the competing A/S tires.  The Comp-2 was stacked against Yokohama’s AVID ENVigor and General’s G-Max, both competitive pricewise. However, taking turns in the Mustang on the General tire was heart-stopping in an unfortunate way. Grip was insufficient and stopping was less vigorous than you’d hope. 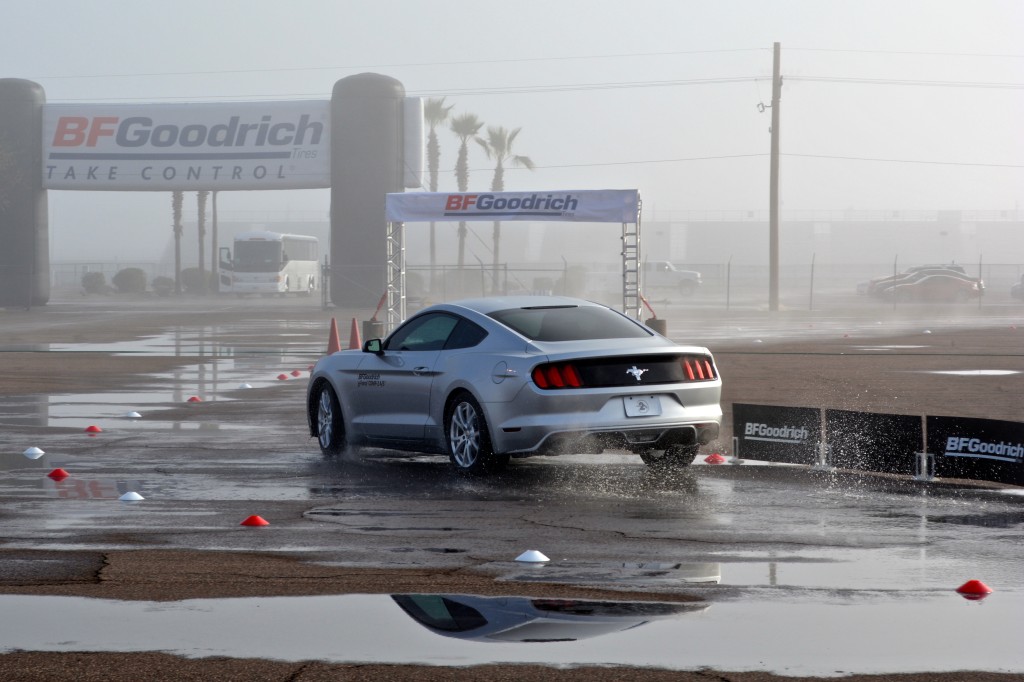 What both the wet and dry tests showed was the power and stability inherent in a sticky, substantial tire working at its maximum capacity, and while most of us aren’t autcrossing sharp turns and slaloms, weather generally results in downed branches, misplaced cinder blocks (ask my last Mazda about that), and other detritus to be avoided. I want a tire that lets me do that effortlessly in rain and shine, particularly if going at steady speed. These lived up to that challenge. 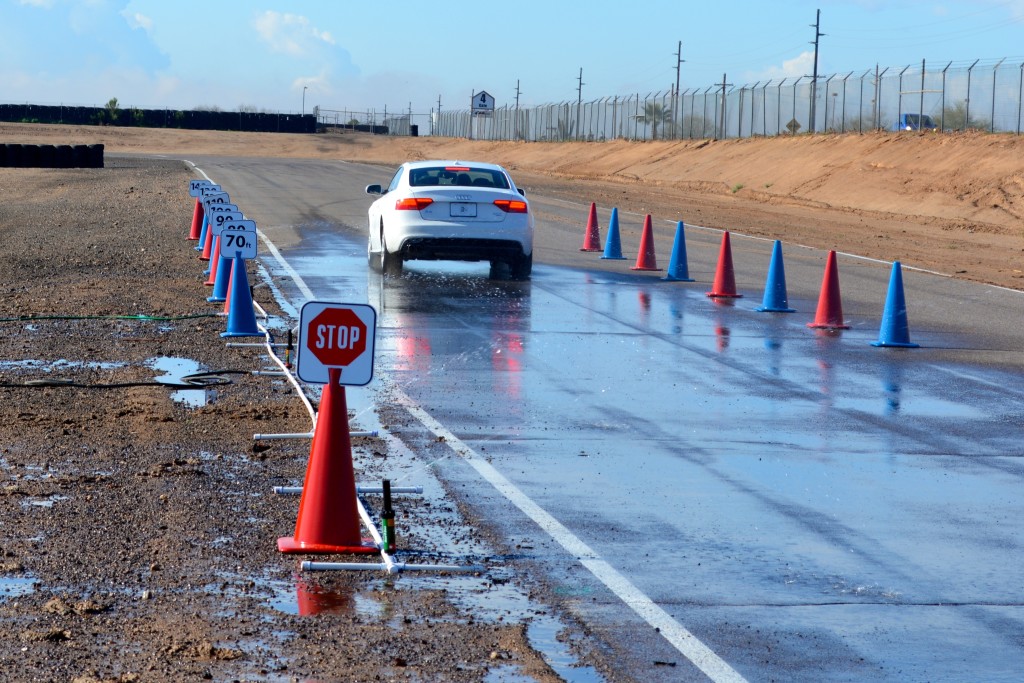 The braking test in an Audi A-5 on the Comp-2 and the Hankook Ventus S1 Noble 2. Accelerating up to 50 and then slamming on the brakes showed a strong, efficient stop in dry conditions, and a truly heart-stopping difference in performance in wet.  We got a chance to look at everyone’s assembled scores, and even accounting for differences in driving style, there was a consistent, favorable, difference between the Comp-2 and the competition.

In a road test, the tire was reasonable quiet and provided steady grip on a long, flat stretch of dry Arizona road when bumping over asphalt, a slatted bridge and gravel. Sure, there was a little noise, but odds are, unless you’re driving a luxury vehicle like the Audi, a little road noise is part of the charm.

So, should you consider the Comp-2 for your vehicle?

That’s the official statement, but what does it mean? Big tread blocks keep more tire in contact with the road. Wraparound tread blocks on the shoulder increase cornering stability, and the ETEC System keeps thinks sticky when you’re going faster.  All that is contained in a high-silica, cold weather flexing compound that lets all of this happen.

Basically, because of how it’s made the tire stops sooner, grips better in multiple conditions, and at an average MSRP of $162, is affordable enough that it might make sense to consider an A/S tire for your high performance vehicle if you live somewhere that defines weather as conditions other than 72 and breezy.

It’s currently offered in 59 sizes, with the promise of more to come, so odds are, as the snow melts and you look for something to shoe your pony with, the Comp-2 is ready for you.

Reps from Shelby were on hand to make sure that we didn’t break the Pony, even as passengers.

Detroit Speed does it again with this Camaro.

When you’re a good little journo, and don’t wreck the cars you test in, they drive you around real fast in things like this Shelby powered Mustang.

And this Detroit Speed 1970 Camaro.

Or this little Radical.

It was just so cool. This Camaro made you remember what going fast is really like.

About Andreanna Ditton 138 Articles
Andreanna Ditton is the Content Manager for MotorHead Media and the Editor-in-Chief for RacingJunk.com/news. She's been working in the automotive publishing industry since 2007 focusing on racing and performance for motorcycles and cars.