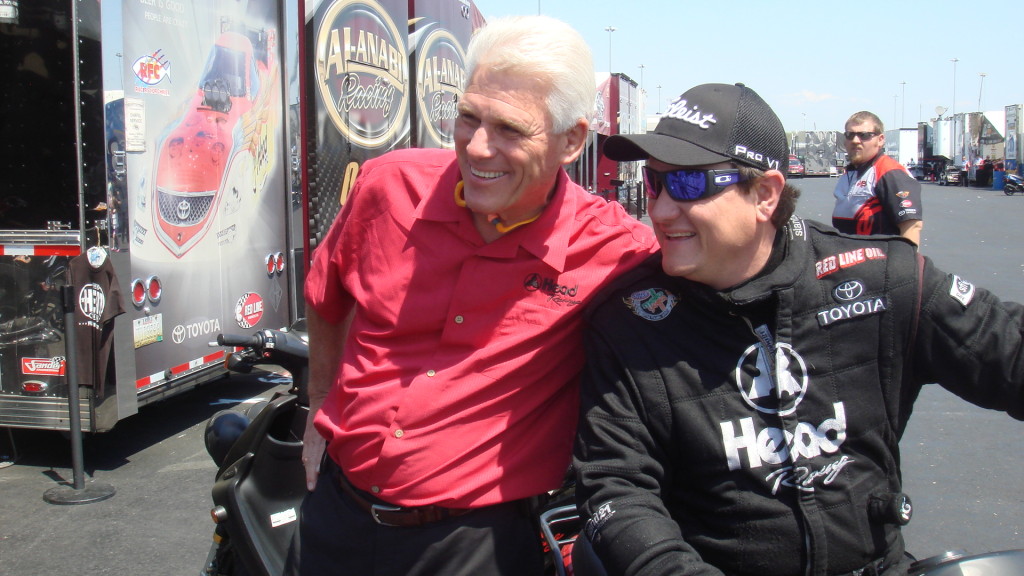 This year’s Amalie Oil Gatornationals at the Auto Plus Raceway will mark Chad Head’s third year of competition and the Columbus, Ohio resident’s career is just now beginning to surge.

He just came off his best race at Phoenix and although it was just a quarterfinals finish, it marked a significant quest to be consistent and his Head, Inc. Toyota team couldn’t be any more pumped up.

At the Phoenix race in session one, he collected a center-line cone, but from that point on, Head recorded times of 4.078, 4.077 and 4.043 and started No. 11 against Ron Capps where he ran the second quickest elapsed time of the first round. This was his best of the weekend of 4.023 seconds while Capps lost traction.    Against his good friend and nemesis, Del Worsham, Head again made a race out of it but his 4.078 was bested by Worsham’s 4.047 seconds.

“If it wasn’t for my screw up in the first session, our car theoretically would have made it six out of six times,” said a determined Chad Head.  “Without a doubt, that is awesome.  It kind of reminds me of the nostalgia car.  I’m hoping we’re on to something and I know all the guys, John Boyce and John Davis and all the guys in the shop are just absolutely busting their butts with our new car and the new 2015 Toyota body.  Obviously, going to Gainesville, how can you not feel great?  Although, we don’t want to get ahead of ourselves, it’s just one race.  There are a lot of good cars out there.  Our run in Phoenix was definitely neat, that’s for sure.

“Not only do I get to drive a great race car, I get to drive a race car with my dad being the crew chief.  I don’t have too many free weekends anymore between racing and the construction company.  Going to races is like a competitive weekend off.  We’re very fortunate to be able to do that.”

It’s his dad who makes the wheels turn and Chad is fortunate to have six-time nitro winner, Jim Head as the leader of this team.  The veteran driver turned tuner, is only getting better with age and Chad has him to discuss any situation that may come up. 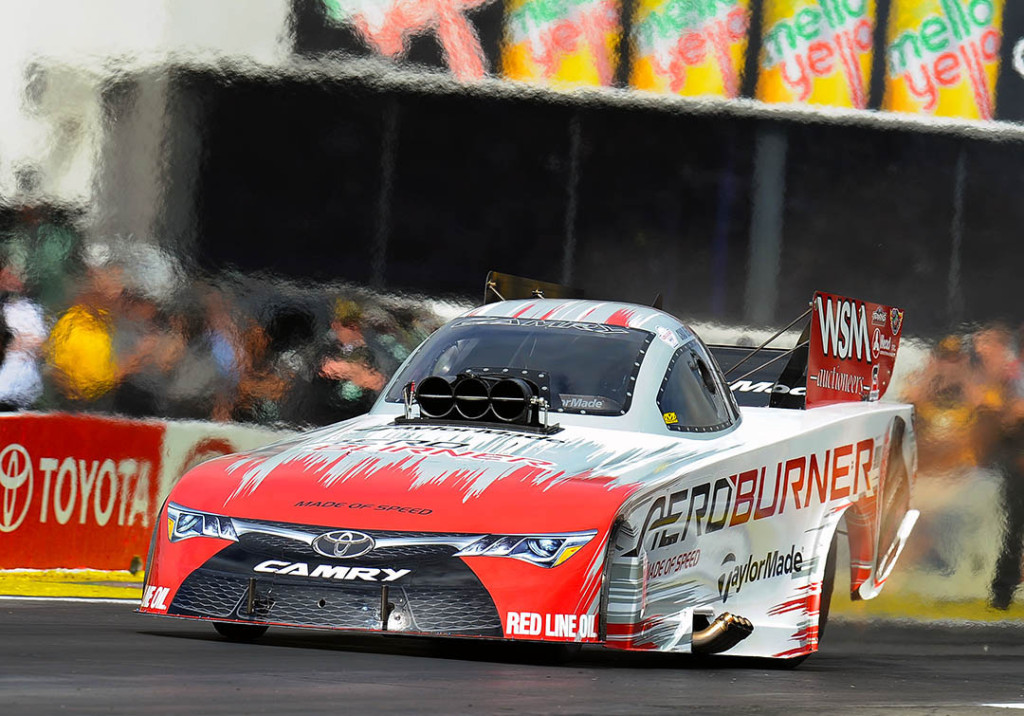 “He really doesn’t say too much and he’s been really good,” said Head.  “He tries to help me with tips of keeping it in the groove, trying to stay ahead of the car.  I still need to work on that quite a bit.  Sometimes the car still gets ahead of me, instead of me being ahead of it.  So, it’s a balance.  He tries to help me with that and we go over the video and he actually has been really good.”

Now after a run, it’s a careful study of what the car is doing, feeling and feedback Chad has during the run and lately all that diligence is paying off.

“I’ll sit with Dave Laheah and we’ll look at the video and look to see to make sure that I’m not deep staging.  We’re just trying to analyze the run.  I try to do that before dad gets back to the pits.  Of course, shutting the car off at the appropriate time, not at 1,010 feet, not 990 feet, he expects that car to be shut off at 1,000 feet.  So I try to be very aware of where I am on the racetrack and try not to drive it to 1,100 feet.  You have to be cautious and you gotta to know of where you are.

Head has worn many hats in his motorsports career, including working summers for Dad’s team as a teenager and later included a stint at John Force Racing, the NHRA, the IndyCar series and was Director of Racing Operations at Alan Johnson racing before a family Thanksgiving vacation in 2012 that changed that all around.  After talking with his father and the encouragement he got from family he joined Head, Inc. and is now taking an active part in the construction business.

“At the time, I was very, very happy working at Alan Johnson Racing,” said a smiling Head.  “I really wasn’t looking at making a move.  It took a vacation in both dad and I talking to each other.  It was time to try to get into the family business.”

Now his schedule is totally full, hitting the road for Head, Inc. at their different job sites and is slowly learning the business.  He leaves the track and is right back to work on Monday to the construction site.

“Lately, I’ve been going right to New Orleans,” stated Head.  “We have a project there in Belle Chasse and we started that project back in August and my main responsibility was trucking.  I was trying to figure out how to mind the trucking and it’s about a two-hour round trip from the asphalt plant to the military base.  I’ve pretty much been on-site just about every day that we’ve paved asphalt.  I’ve had to manage the tonnage, manage what’s going on on-site, deal with security issues, deal with badging, just a lot of on-site issues.  It’s a great learning experience. I basically go from racetrack to the job site, back to the racetrack, and back to the job site and every now and then, I get to come home.

“Before coming on board, I had never been involved the construction business until well over two years ago.   Just because it was my father, Jim Head of Head, Inc., the family business, I had never had anything to do with it.  Everything is new to me.  We have an amazing staff and everyone is very patient.  All the project managers, superintendants, and the quality control people have worked with me in trying to get me up to speed.  Hey, I’m 41 years-old and I have a long way to go.  I’m basically starting a new career at 40.  It’s pretty tough.” 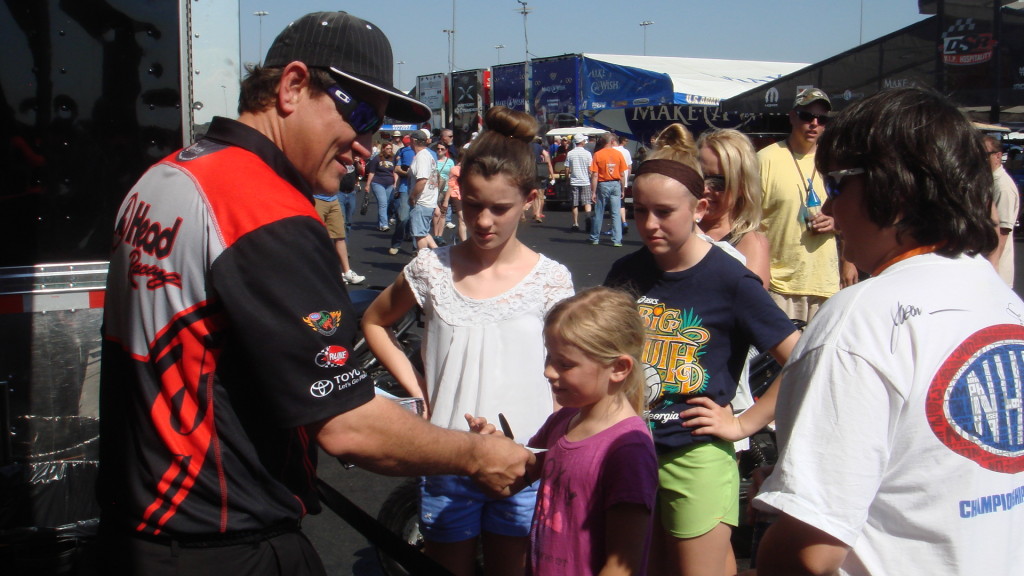 The Head, Inc. Toyota team knows the price to run a Funny Car is in the millions and for the first two races had TaylorMade Golf and WSM Auctioneers sponsorship; Chad is always looking for sponsors and the additional funding.

“Anytime you can have somebody on the car, it’s a positive,” he said.  “We were very fortunate to be contacted by an advertising agency on the TaylorMade deal.  It was a great opportunity to be hooked up with a big company and do some of the neat things that we got to do.

“Obviously, getting back with WSM Auctioneers and John Cadzow was good for us last year in Phoenix.  He wanted to do it again in 2015. I think that’s a great relationship we’ve formed.  Hopefully, next year, we’ll have a full-time sponsorship and can bring them on as an associate sponsor.  He’s very excited and is talking about doing something possibly at Las Vegas and maybe even Pomona.  He’s seen the value and what we can bring to his company.”

Gainesville is coming up on the schedule and is one of NHRA’s bigger events of the season.  Head Racing is very much in the Funny Car mix right now and the possibility of a win could be the right up they consistent way.

“There are a lot of cars capable of running up and down the dragstrip in Gainesville,” he said.  “You can’t take any of the credit away from what we accomplished in Phoenix.  It’s only one race and we know that.  We need to continue to do that.  If we continue to go up and down the racetrack even if we’re not the quickest, I still believe that’s how you win rounds.  That’s how you get people to screw up against you.  If your opponent knows they are facing a car that is capable of running nearly 70 to 80 percent chance of going down the racetrack, they are going to tune their car up a little different.  The more consistent you can be, the quicker you can go.  You have to walk before you can run and we’re doing a lot of walking right now.  Later, I’ll be looking forward to doing a lot of running.”

At the end of the day, it’s all about family and Chad getting to spend time with his dad. It’s something he really enjoys.

“We spend time together at the racetrack, spend time together at the office,” said Chad.   It’s a love/hate relationship sometimes, just like any other father/son.  I still have a lot to learn from him and he’s learning how to deal with me.  Overall, I think we’ve both done a very good job. I feel that there are some things, I could do better and he’s thinking there are things he could do better on the car.  I think we’ve both have come a long way.” 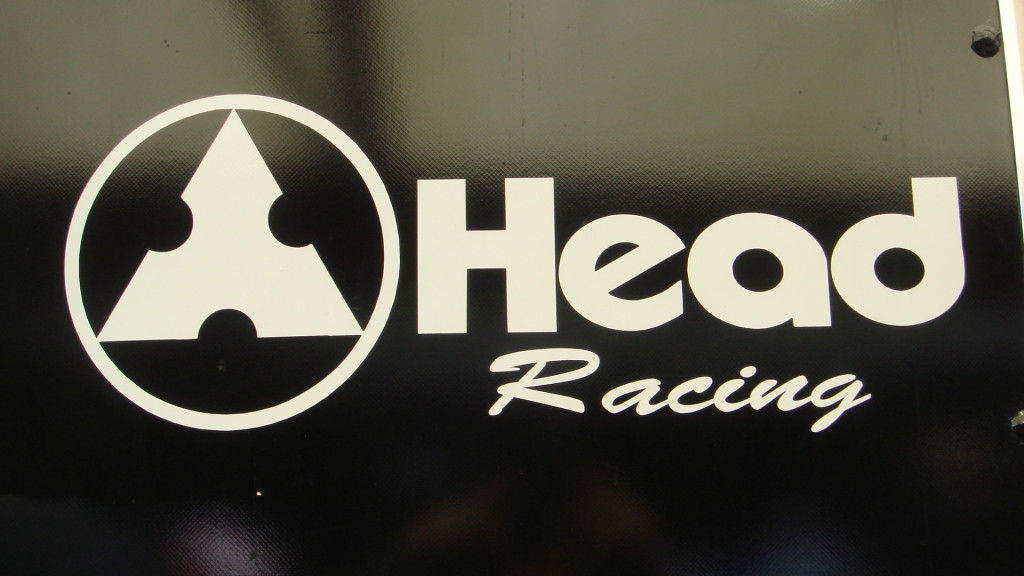