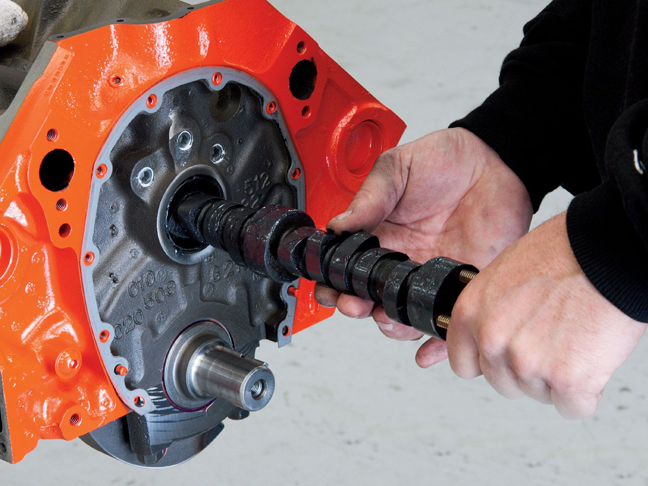 Part IX: Timing is everything—Advancing or retarding the camshaft.

It’s all in the timing. No matter what the situation, truer words have never been spoken. But, when it comes to camshafts, grasping that understanding is many times considered black magic. But it reality, it isn’t that hard to understand. There is an infinite amount of information on the Internet about how a camshaft works. You can find out how things like what lift, duration, and valve events are, and we have even covered choosing a cam, and the difference between types of camshafts, but what do you know about camshaft timing? What really happens when a camshaft is installed at “zero” (straight up), or advanced? In theory, advancing or retarding the camshaft’s timing moves the engine’s torque band on the rpm scale by changing when the valve events occur, but how much, and in what direction?
A camshaft that is advanced four degrees causes each valve opening and closing event to occur at four degrees of crankshaft rotation sooner than when at zero. On the other hand, if the camshaft timing is retarded, the intake valve will open and close later in the rotation cycle (usually sometime during the compression stroke). Because of the later event, it should be no surprise that this decreases cranking compression, and hurts low-rpm power. But as engine rpm increases, and since cylinder filling is aided by the velocity of the air and fuel charge coming from the intake, a retarded camshaft will theoretically help build more power at a higher rpm by holding the intake valve open later. This simple change alters the cylinder’s ability to build pressure during the compression stroke.

Failure to accurately degree the camshaft during its installation is a sure-fire way to lose power, or even hurt your engine. While an engine that has a camshaft installed at zero will operate as designed, taking the easy route and simply “slapping” the camshaft into the block could mean leaving additional power on the table. It might be hard to believe, but there can be as much as four or even six-degree variations in different timing chain sets. This variation affects the camshaft timing. Because of these variations, achieving proper valve timing becomes a crap shoot when not using a degree wheel. A camshaft’s published valve timing is simply a suggested starting point. There are too many variables within each engine that may in reality, call for different valve-timing events, and the cam card that is supplied with your camshaft should give you an appropriate install procedure in regards to the proper degree for your application to start with, but you might find that you need to fine tune the camshaft’s timing to gain peak performance from your engine.

There are two ways to change the power building characteristics of your camshaft. You can either advance or retard it during installation. By doing so, you literally move the power band higher or lower a few hundred rpm. Before ignition boxes made it easy to advance and retard ignition timing, some racers used to advance or retard their engine’s camshaft to account for track conditions. In a nutshell, just advance the camshaft for more bottom end power, or retard it for more top end power. It usually takes at least roughly a four degree change to be noticeable. Remember that the opening and closing times of the valves are changed when you advance or retard the camshaft, so, when moving the camshaft timing, it is recommended that you check piston-to-valve clearance. We recommend that if you will be experimenting with camshaft timing, check your piston-to-valve clearance with the camshaft both advanced and retarded at least six degrees from the recommended install point. This will make sure that you have sufficient clearance for any timing changes you may want to make in the future.

Like we said, retarding the camshaft improves high-rpm power. This is because the valves are closing at a later time in the combustion cycle. In this scenario, the intake valve is closing after the piston has started to travel back up the cylinder bore for the start of compression stroke. When the camshaft is advanced, this creates a situation at low engine rpm, because the intake air velocity is low. This low velocity causes the air that was in the cylinder to be pushed back into the intake manifold (reversion), causing turbulence.
At high-rpm though, the rules change. Once the air is moving, it doesn’t want to stop. This means that the air can continue to fill the cylinder, even after the piston has started to travel up in the cylinder’s bore. This can actually allow an engine to slightly exceed 100-percent volumetric efficiency.

Advancing overall camshaft timing is better for low-rpm power. This is because the valves are closing a little sooner—like at or near the time when the piston is at the bottom of the cylinder’s bore for the start of the compression stroke. This is good while at low rpm, because the intake air velocity is low and easily affected by changes in the piston’s movement. When the piston gets to the bottom of the cylinder’s bore on the intake stroke, the valve is closed, and no air can escape as the piston begins to travel back up the cylinder on the compression cycle. At high-rpm, this is not a good thing since the air has inertia, and responds slower to pressure changes. This potentially chokes the air flow to the engine. 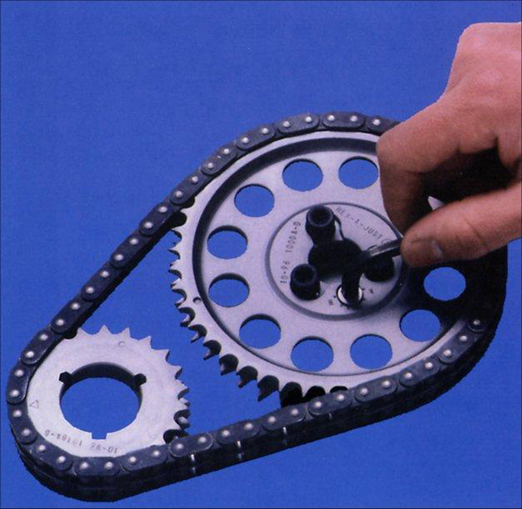 The Cloyes hex adjust small block Chevy timing chain features a maximum of three degrees of advance/retard at the camshaft, and a maximum of six degrees of advance/retard at the crankshaft. A special hex head bushing is installed on the camshaft’s dowel pin. This bushing lines up with markings on the cam sprocket, and you can adjust the timing in fractions of a degree by loosening the cam bolts and turning the bushing with an Allen wrench. 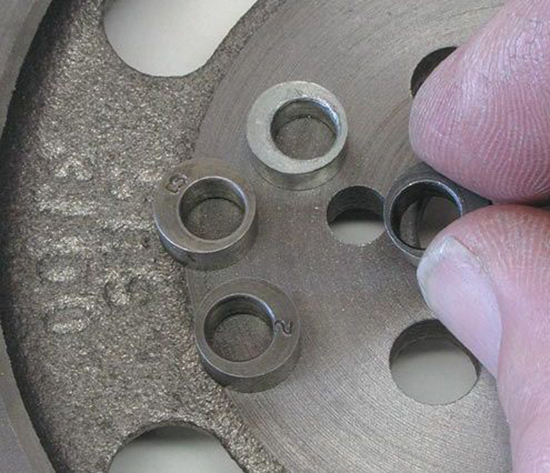 Altering the timing of a camshaft in a small block Chevy is a simple task. There are offset bushings available that are used in the timing chain top gear. The bushings have an offset hole that allows the timing to be changed by simply twisting the bushing. 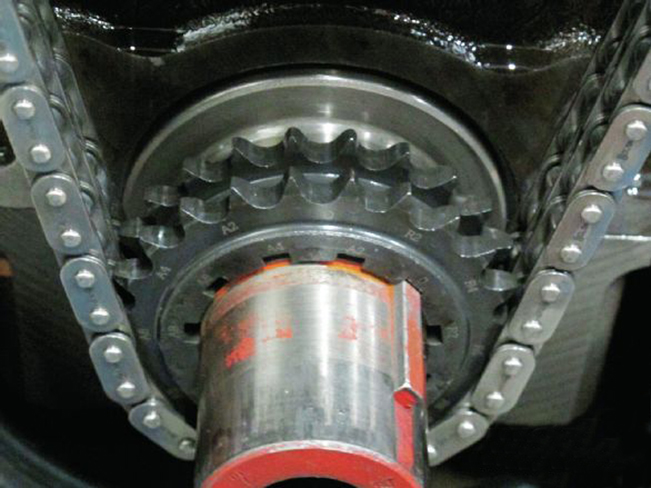 Comp Cams has a timing set that allows for camshaft timing changes via grooves on the crankshaft gear. By lining up the appropriate groove (in this case, zero), you can choose the advance or retard that you want. 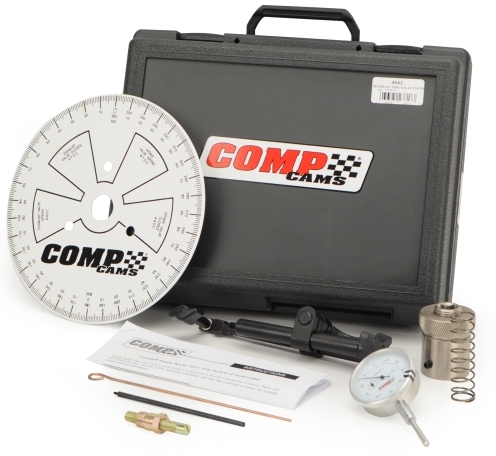 It’s impossible to get the camshaft correctly degreed without a degree wheel. This kit from Comp Cams gets you everything you need, including step-by-step instructions.