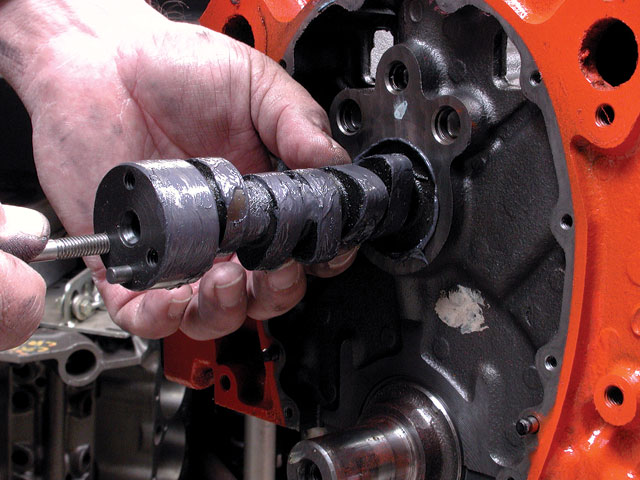 When looking at a camshaft, it’s easy to see that the actual opening movement of the valve is created by the gradual slope (ramp) of the camshaft lobe. The amount of time that it takes the lifter to open and close the valve is called the duration of the lobe. When measuring the duration of a camshaft, it is measured in degrees of rotation. These degrees however, are not measured in camshaft rotation, but rather, the rotation of the crankshaft.

So let’s take a look at how duration is explained. When lift first begins, it is often difficult to identify. This is because the camshaft profile is very gradual at this point. That is why many years ago, .006-inch of valve lift was decided upon as an SAE standard for measure. While rotating the crankshaft, when lobe lift achieves .006 inch, you start recording the number of crankshaft degrees it takes for the same lobe to go through max lift and back to .006-inch lift on the closing side. Let’s say this numbers ends up being 270 degrees. This is the “advertised” duration of the lobe, because this is the number that most camshaft manufacturers use when referring to their camshaft duration numbers in advertising.

The problem with using advertised numbers when choosing a camshaft is that not everyone uses the same .006-inch lobe-lift figure to determine duration. So, when discussing camshafts, you seldom hear anyone mention that their camshaft’s duration is X while measured at .006 inch. Long before many of us could install a camshaft, Harvey Crane initiated the usage of .050-inch as a measurement. This measurement was eventually adopted by all manufacturers, and is now a true standard.

In theory, one would think that the ideal camshaft would have 180 degrees of duration, and zero degrees of overlap. This means that the intake valve would open at Top-Dead-Center (TDC), close at TDC, and then continue to cycle through the compression and power stroke until you were at Bottom-Dead-Center (BDC). At this point, the exhaust valve would open for another
180 degrees until you reached TDC at the beginning of the intake stroke. This might work okay on an engine that only spins to a conservative 2,000 rpm, but if you spin the engine any harder, power would be seriously compromised. The reason for this is because air has momentum. This momentum of air is why the intake valve must actually open before TDC. This pre-TDC opening is to make sure that the valve is open far enough to allow the incoming air and fuel to be pulled into the cylinder once the piston begins to move downward. Likewise, when exhaust gases are forced to leave the combustion chamber, they create a vacuum behind them (scavenging), and this is also assists the incoming flow of the next intake charge into the combustion chamber. This creates the need for a certain amount of overlap (i.e.: when both the intake and exhaust valves are open between the end of the exhaust stroke and the beginning of the intake stroke).

Single-pattern camshafts have the same duration and lift for the intake and exhaust valves, but if there are different lift and duration numbers for the intake and exhaust, these are called split-pattern or dual-pattern camshafts. When you increase the duration of a given camshaft, you shift the power and torque curves upward in the rpm range. For that reason, longer duration camshafts are suited for higher rpm operation. Using a longer duration camshaft at lower engine rpm, causes the intake valve to be open too long for maximum efficiency, and allows some of the air and fuel mixture to get pushed out through the exhaust, and even back into the intake manifold (this is called reversion). One caveat in that affect, is that the more cubic inches an engine displaces, tends to lessen the effect of having a camshaft with more duration. This means that the same duration cam in a small displacement engine will have a higher peak rpm than if it was installed in a larger displacement engine. Example; if a camshaft provides peak horsepower at 6,500 rpm when used in a 350, the same camshaft might peak at 5,500-5,800 rpm in a 406 or 410 small block.

Having more duration is better-suited for use in lighter cars having a lower-ratio rear gear (numerically higher), higher stall converters, highly-ported heads, and a higher compression ratio. Having less duration is better for use in heavier cars with a higher rear gear (numerically lower), lower stall converters, non- or mildly-ported heads, and a lower compression (to prevent too much cylinder pressure during cranking).