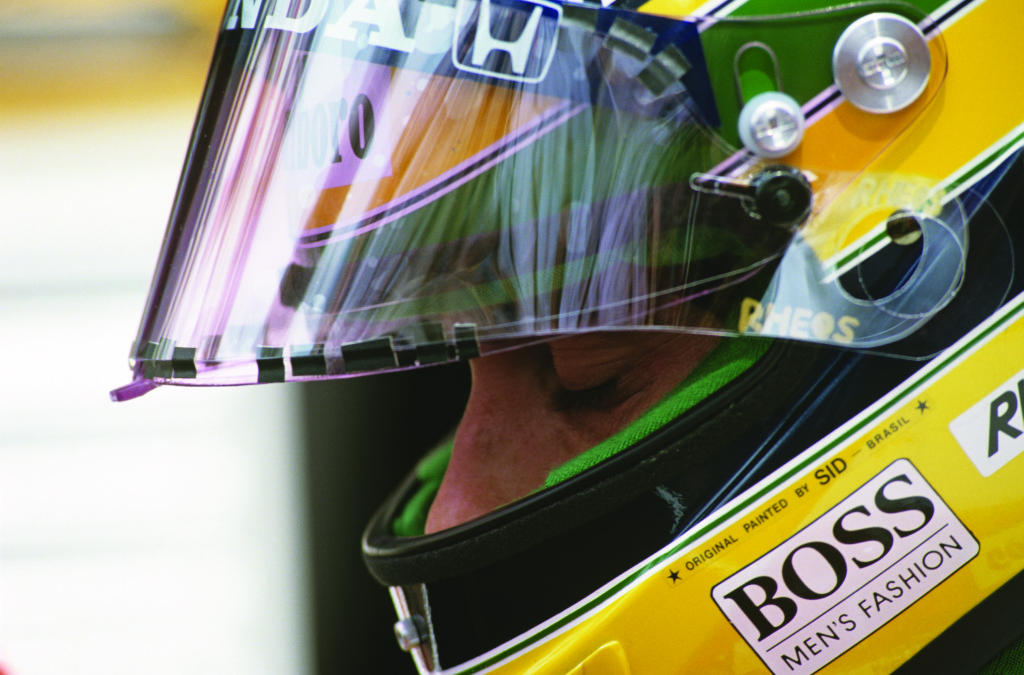 Twenty years ago, racing legend Ayrton Senna died in a tragic accident at the San Marino Gran Prix. Reminiscences of his life, his legacy and his death have filled motorsports publications as the racing world ruminates on the anniversary of  his loss, and the loss of others in the sport.  The documentary about his life and racing career, “Senna” has given even non-race fan audiences a glimpse into the power and beauty of the sport and its competitors, but it is hardly the first time that racing has been featured in film.  Below, we celebrate some of that legacy, as filmmakers attempt to bring racing to the masses in an effort to facilitate the understanding and translate the exhilaration of speed to viewers.

The history of racing in film goes all the way back to the silent era when there were no sound effects,  just a score accompanying the movie. You were treated to watching the cars race by, but you could not hear their engines fly past you. Live events were still the big game in town but slowly and surely people were pouring into the cinema to see things they couldn’t see because of their geographic location, like a Grand Prix.

1929 –  Speedway
A silent film, and the first on the list to feature a father and son racing the limits at Indianapolis Speedway.

You can’t stop progress, eventually the talkies and sound effects trickled into the theater.

1932 – The Crowd Roars
Star power enters racing with James Cagney directed by Howard Hawks and a controversial scene of a burning racecar and body thanks to Pre-Hays Code standards.

1947 – Born to Speed
Past tragedy is brought in as a plot device and creates conflict within the starring cast as they experience the dangers and sometimes price of motor sports.

1949 – The Big Wheel
Mickey Rooney, the biggest box office draw at the time, starred, bringing in audiences in droves.

1955 – The Racers
Mega stardom meets racing with a showcase vehicle for Kirk Douglas.

1965 – Red Line 7000
Stock cars are featured in this film with races at Daytona and NASCAR. A camera mounted car was driven in an actual race by professional driver Larry Frank. There are also many crashes featured including A.J. Foyt’s famous violent crash at Riverside. 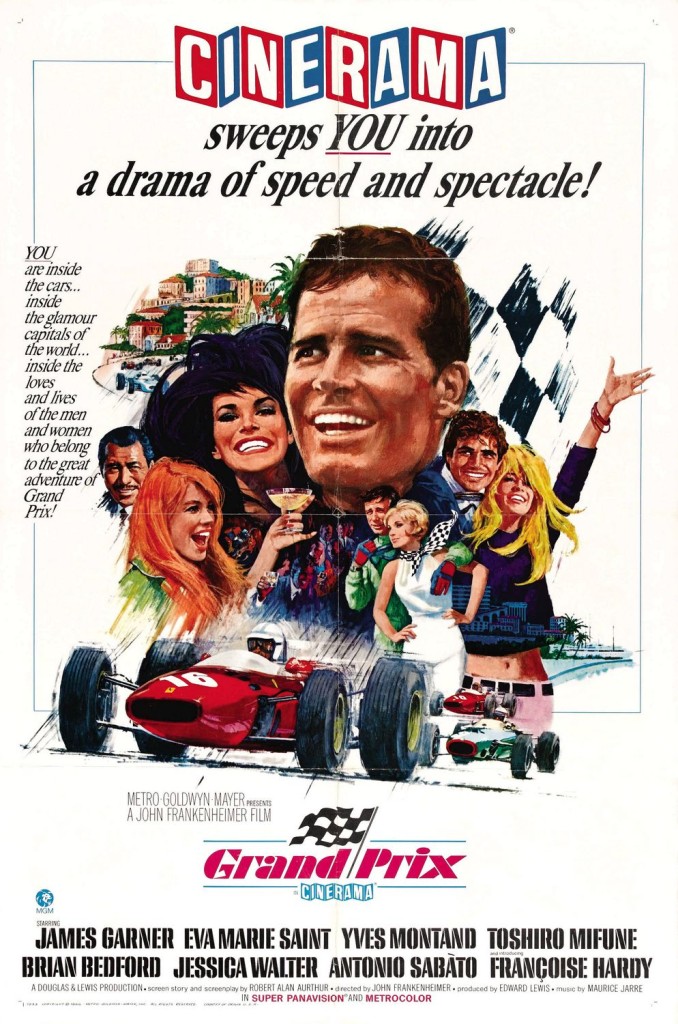 1966 – Grand Prix
Virtuoso John Frankenheimer directed this racing epic of the Formula One tour with exciting in car camera footage of the Monaco Grand Prix.

Musicals and goofy comedies managed to percolate the racing scene with a couple of Elvis Presley features and Disney’s lovable Herbie the love bug series.

1966 – Spinout
An Elvis starrer which features a memorable scene at the beginning of the final race. A car wouldn’t start and Elvis agreed to fix it if he was given the chance to race the car and if he won the prize money would still go to the owner.

1968 – Speedway
This Elvis musical features stock cars with a funny scene where a family is sleeping in the back of his racecar and they wake up in the middle of an actual race to his surprise.

1968 – The Love Bug
A sentient Volkswagen Beetle races and wins against cars he has no business in competing with. This spawned a successful franchise for Disney because kids loved the cute racing bug.

1971 – Two-Lane Blacktop
James Taylor and Dennis Wilson drive cross-country drag racing on the street for a living giving way to the new rebel culture and the anti-hero.

1973 – American Graffiti
George Lucas response to the anti-hero reminding America of time more innocent and pure when cruising and car culture was a mating ritual for young teenagers and drag racing was the exhibition in showing male prowess.

1973 – Wheels of Fire
Hard to find documentary on drag racing in the NHRA that combined the real life world of drag racing with a docudrama spin, a later formula used in the popular docudrama “Pumping Iron” that made Arnold Schwarzenegger a star. Drag racing was still growing in popularity, but the documentary never caught on. The NHRA tends to broadcast the film from time to time.

1974 – Funny Car Summer
The exploits of the Dunn family racing their rear-engine funny car across a season.

1975 – Death Race 2000
Roger Corman gave racing the B-movie treatment. This film revolves around a race in the future where you get bonus points for running people over. This adrenaline-fueled dystopian future featured Sylvester Stallone in one of his first roles.

1976 – The Gumball Rally
Based on a real life cross-country race from coast to coast, the audience has a great time cheering for their favorite car and seeing if it won out in the end.

1977  – Bobby Deerfield
Formula One takes a backseat to a serious drama starring Al Pacino and directed by Sidney Pollack with the weight of romance and death.

1978 – Grease
The musical is revived and a grudge race in a canal between two rival gangs with this sly and sexy wink to the culture of the fifties.

1979  – Fast Company
David Cronenberg and car enthusiast is a hired gun in this farm league drag racing feature with my favorite scene being a nitro funny car racing on the street.

1981 – The Cannonball Run
Another cross-country race movie featuring a star studded cast with the atmosphere of an oddball comedy that spawned several sequels.

1982 – Six Pack
Stock car racing takes center stage with a group of orphaned kids that steal parts for Kenny Rogers’ car so he can race. The movie features real race footage from NASCAR.

1983 – Heart Like a Wheel
The first lady of drag racing Shirley Muldowney’s life story is shown on the big screen.

1986 – The Wraith
Fun horror is featured with road pirates going up against a futuristic ghost car where every race ends in the death of the loser.

1990  – Days of Thunder
NASCAR is shown in a more serious tone with the secret of he didn’t hit you or bump you, he rubbed you and rubbing is racing.

1992  – Freejack
Science-fiction enters racing with a spectacular crash of an Indy car flying into an overhead bridge and exploding. The crash is a plot device to get the protagonist into the future where his body will be stolen and used as a replacement for a rich customer.

1993  – Born to Run
In this low budget drag race flick a red mustang pushes the limits in illegal street racing with Richard Grieco at the wheel.

2000  – Super Speedway
Indy racing is given the Imax treatment with breathtaking in car point of view filming.

2001  – Driven
Sylvester Stallone penned this flick that began life as an Ayrton Senna biopic but Formula One didn’t approve of the script so Stallone then took it to Indy car. One of my favorite scenes are the racecars racing on the street, something about a race car on the street fascinates me.

2001  – The Fast and the Furious
This street racing  blockbuster spawned multiple sequels, making it the most successful car racing franchise of all time.

2005  – Initial D
Drift racing is introduced into the silver screen where tofu-delivery driver Takumi drifts up and down the mountain to deliver the food on time making him an ace in drift racing. 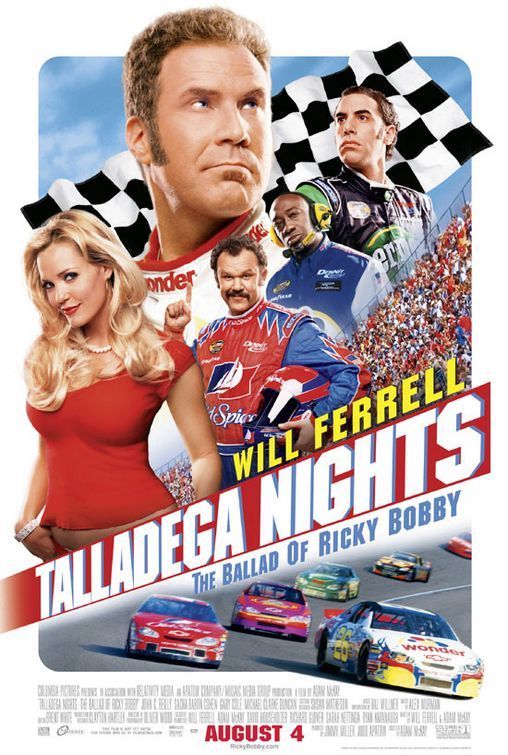 2006  – Talladega Nights: The Ballad of Ricky Bobby
Pitched to movie executives as simply Will Ferrell in a NASCAR. It was green lit on that one sentence.

2006  – Cars
Animation makes its debut in racing with Disney’s heart-warming tale of Lightning McQueen and the yesteryear of small town America.

2008  – Speed Racer
The Wachowski Brothers bring the sixties beloved cartoon to life in this colorful special effects spectacular where producer Joel Silver describes the racing and car action as Car-Fu.

2008  – Death Race
A remake of the original film crafted into a Jason Statham action flick.

2010  – Senna
A serious documentary about what has to be the greatest Formula One pilot of all time from his dramatic rise to his tragic death and legacy, which earned two BAFTA Awards.

This brings us to our final year of racing in film which featured two racing rivals in both Formula One and NHRA during the turbulent seventies.

2013  – Rush
The immortal run of Niki Lauda and his charismatic rival British National James Hunt and their fight for championship glory and redemption.

2013  – Snake and Mongoose
A rivalry in drag racing that gave way to big corporations as sponsorship and molded the NHRA into the world class organization it is today.

So what’s your favorite race movie?