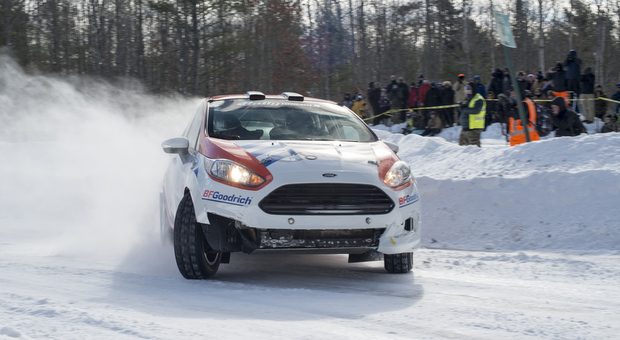 Story and photos by Aaron Pierce

There’s a romance to motorsport unique unto itself. Drivers strap themselves into cars, a machine becomes their exoskeleton and vehicle for expression as much as it is a vehicle of locomotion. The two become one and their performance becomes art which can be appreciated by all in skill, but is maybe best understood by those who brave the fences, the barriers, and the hedges so that they may feel the roar of the engine and the scream of the tires as they become alive in a flurry of heel toe gearshifts, opposite lock, and wide open throttle.

In rally car racing that art is a collaborative process. A co-driver keeps navigational cadence for the driver and the two fly past trees and over crests flat out through the woods on unpaved roads as they race for time and position, and rally fans brave similar elements and often similarly challenging roads just to be there for those seconds between stages.  Add snow to all of these factors and you’ve got hard core racers, AND fans.

The 2014 Sno*Drift Rally in northern Michigan, held through and around the towns of Atlanta, Lewiston, Gaylord, and Hillman, ran at the end of January, kicking off the Rally America national series. Rally veterans tell us this was the coldest Sno*Drift ever. Temperatures ranged from single digits to subzero and high winds lashed fans and competitors steadily at 20mph, gusting to 40mph. There were also accounts that this Sno*Drift, despite the weather, had more fans present than any other in the rally’s history. It appears that rally has worked itself into more people’s circulatory systems.

The second rally of the series will be the Rally in the 100 Acre Wood, held in Salem, MO, about one hour West of St. Louis at the foothills of the Ozarks and near the Mark Twain National Forest. This rally is one of the most scenic and the fastest in the nation. Hopefully we will see you out on stage in the crowds one day soon.