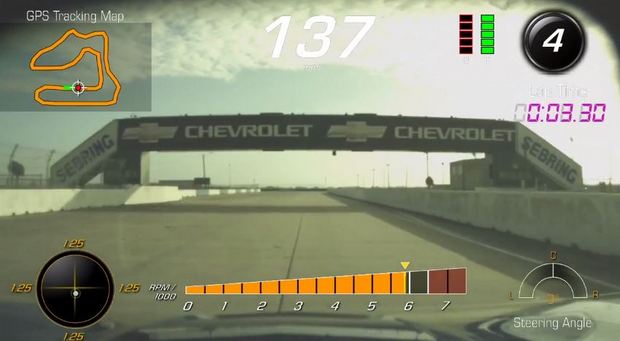 At the 2014 Consumer Electronics Show in Las Vegas, General Motors rolled out the first big addition for the 2015 model year of the Chevrolet Corvette – the new Performance Data Recorder system. The Corvette’s PDR incorporates the efforts of an SD card port, a high definition video camera mounted in the windshield header, a super fast GPS system and an elaborate software program that all work with the C7’s 8 inch infotainment screen.

The Performance Data Recorder features three modes – Sport, Track and Performance Timing. While in PDR mode, the mode chosen displays different timers and measurements on the Corvette’s infotainment screen but when you replay the videos recorded on either the in-car screen or on your computer, the information shown via the PDR shows up as an elaborate telemetry overlay on the video.

-Sport Mode includes a digital speedometer, a linear tachometer, a gear indicator and a lateral G force meter along with the length of the video being recorded.

-Track mode includes a similar digital speedometer, linear tachometer and gear indicator as the Sport Mode but it adds a GPS Tracking Map with a progress icon, a G force meter that shows lateral, braking and acceleration forces, a steering angle gauge, a lap timer, a brake force gauge and a throttle input gauge.

-Performance Timing is idea for measuring straight line performance with an integrated 0-60mph and 0-100mph timer, a quarter mile timer, a 0-100-0 timer, a digital speedometer, a linear tachometer, a throttle input gauge and a gear indicator. There is also a white icon that lights up when the traction control system is forced to engage.

-Finally, if the driver of the 2015 Chevrolet Corvette just wants some high def driving footage, he or she can also select no overlay so there won’t be any additional information included in the videos.

One of the coolest features of the Cosworth-engineered Performance Data Recorder set to be offered in the 2015 Chevrolet Corvette is the track maps included with the system. In much the same way that a video game like Forza Motorsport 5 can show your progress as you race around their virtual race courses, the Corvette’s PDR shows your progress around the race course. This will allow Corvette owners to make incredible racing videos similar to those offered for years by automakers with full telemetry. 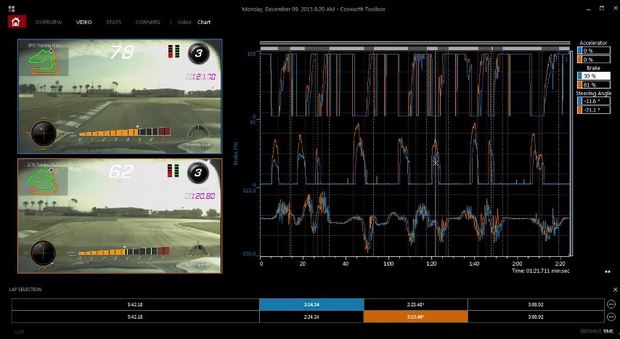 Once you are done racing, you can review the video with the telemetry overlay on your Corvette’s infotainment screen but you can also remove the SD card and put it in your computer where – with the help of the Cosworth Toolbox program – you can more closely analyze all of your track time. Also, with the microphone in the cabin, any driving instruction can be reviewed and studied after the session is over.

The Performance Data Recorder will be available on all 2015 Chevrolet Corvette models which should include the Stingray Coupe, the Stingray Convertible and the new Z06. Pricing has not been announced but I would guess that it will at least set you back a grand or so.

More importantly, there are rumors that this system could end up in more vehicles in the near future – both as a factory feature and as an aftermarket accessory. Now that GM has the PDR in the Corvette, it is sure to show up in some variant of the 6th generation Camaro and perhaps in other performance minded models down the road. Also, Cosworth is reportedly working with the people from GoPro to develop a free standing component system that would work with a vehicle’s OBDII system to offer similar performance readouts via future GoPro products. As a GoPro owner, I’d love to see a PDR option included with the incredibly high resolution video.

The 2015 Chevrolet Corvette Z06 is set to debut next week at the 2014 Detroit Auto Show and perhaps more details on the Performance Data Recorder will be available at that time.