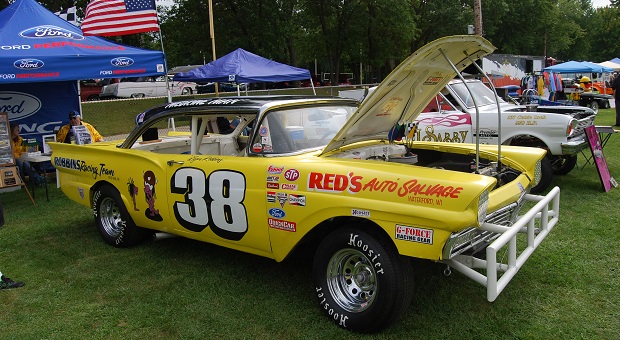 “We’re showing off our ’57 Ford race car,” said Lynn Robbins of Wild Rose, Wis. The yellow Ford Sportsman class hardtop was on display at the 2017 Pardeeville Car Show. “We don’t race the car anymore, because it’s too hard to get parts,” Robbins explained. “The car is all ’57 Ford, except for the engine. The engine is out of a ’74 Mustang; it’s a 351 modified.”

Robbins never raced this particular car, but it had raced in the late 2000s in Vintage Series competition at Rockford, Ill., Columbus and Southeast Wisconsin. Robbins bought it from the gentleman who had it because he wanted to restore a ’57 Ford to look like one he had raced back in 1971.

“So, this car looks exactly like the one we had in ’71,” Robbins pointed out. “We painted it the same colors and everything. We ran at Hales Corners, Cedarburg and Slinger (three tracks in the Milwaukee area).” 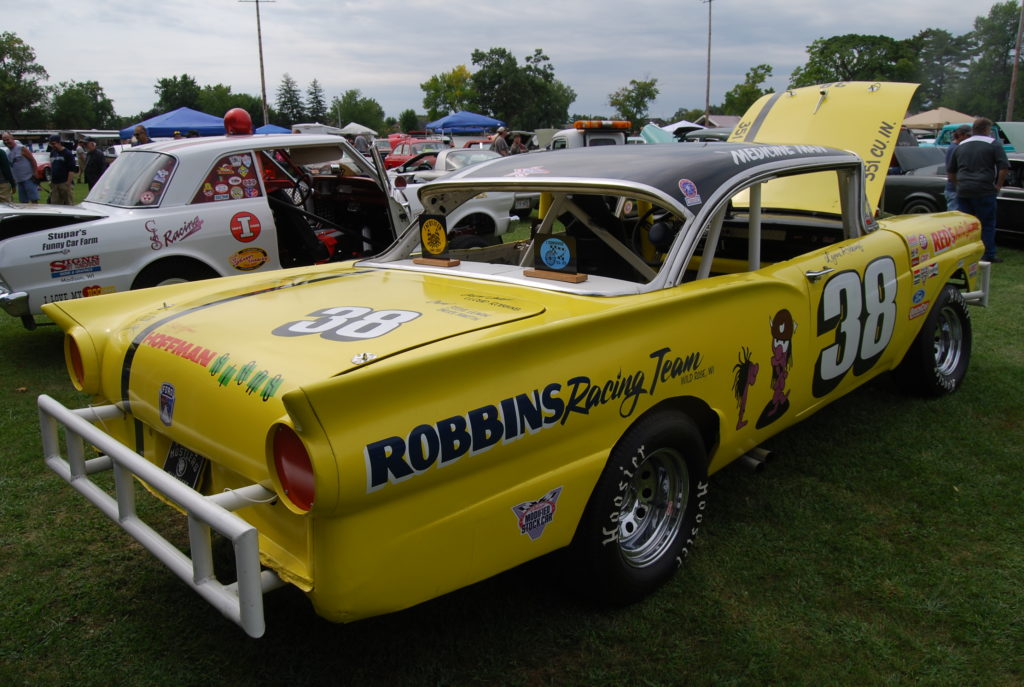 In addition to showing off the car, Robbins was promoting a vintage racing organization called Vintage Modified Stock Car (VMSC) and trying to get youth interested in racing. “The kids like the old race car,” he said. “We try to instill racing in young people and if a kid comes up to the booth, we try to put him or her in the car and let the parents take pictures of them. We get them excited. In fact, I’ve had parents send me copies of the photos they took of their kids with the car.”

Robbins goes to lots of shows. The VMSC has its own shows, including one at the track in Cedarburg on the first Saturday in June. There is another racing show at the Southeastern Wisconsin Short Track Hall of Fame inside the Wisconsin Automotive Museum in Hartford in mid-September. “We do those, and then there’s other ones like Hogs & Honeys and regular car shows,” Robbin noted. “We do shows around Wild Rose, where we live.”

Robbins said the car is “race-able” if someone wanted to race it. “It’ll run with some of the big boys,” he said. Robbins himself raced from 1966 to 1971. “It got to be too expensive, so we couldn’t do it anymore,” he explained. “They were starting to get into newer cars and bigger motors and it just didn’t pay anymore. It’s just like now. He who has the most money wins.” 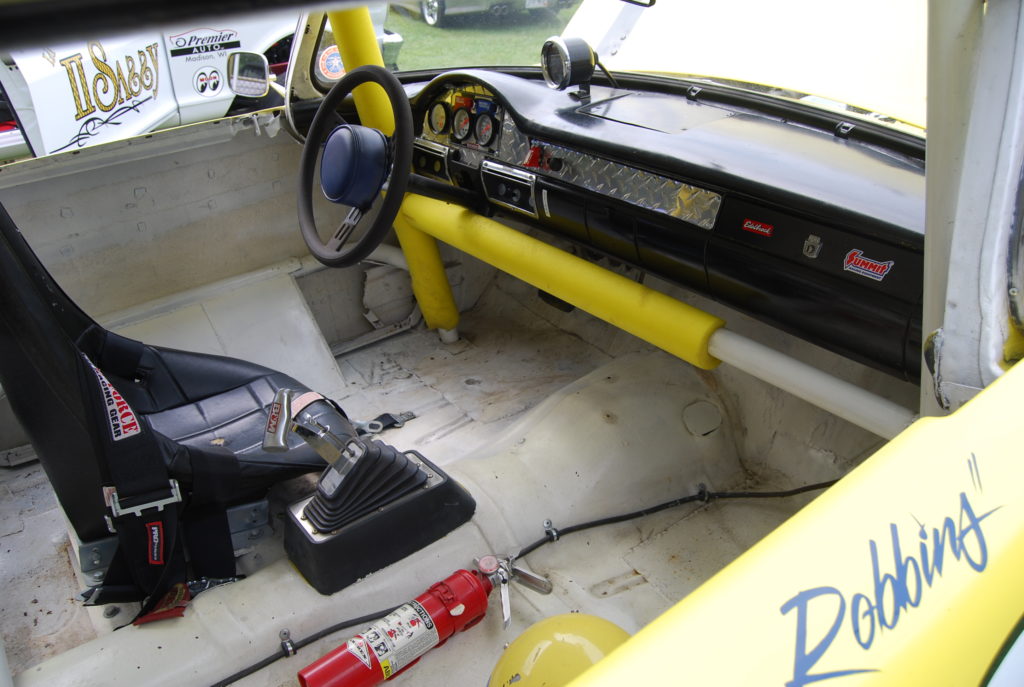 Robbins said his sponsor was a salvage yard in Waterford, Wis., and all he ever raced was ’57 Fords. “We got all the cars from the salvage yard owner,” he pointed out. He and his brother Lloyd also built some different cars, like a ’56 Chevy, for other people, but they didn’t race those themselves. Almost all the racing cars – including the original No. 38 Ford – were built in Lloyd’s backyard.

Lloyd built the cars and Lynn raced them. “We worked out on the ground,” Lynn recalled, “and we used an old oak tree with a big branch to pull motors. We never had a shop. We built them and painted them up, all outside. That’s what you did in those days, and we did pretty well.” 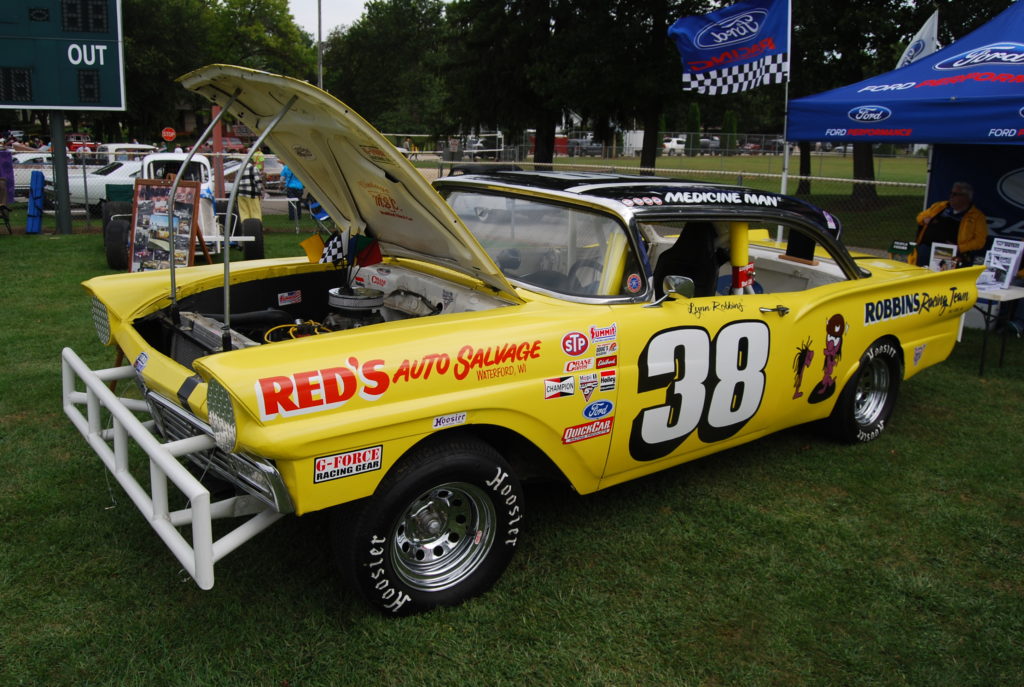