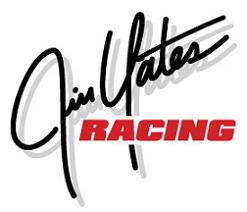 Don't be fooled by the fact that the road to the pinnacle of drag racing's Pro Stock category is traveled only one quarter-mile at a time. It still takes a long time to reach the top every year.

This is the path Jim Yates has chosen to follow. Drag racing is his profession and he recognizes the inherent roadblocks, potholes, bumps and simple bad road that lie ahead. Winning the Full Throttle championship in what is regarded as the most competitive of NHRA's professional categories takes hard work, determination, dedication and a passion to prevail. Yates has an abundance of all of those qualities, as his record shows.

Over the past 18 years, Yates has won two Full Throttle Pro Stock Championships, finished in the Top 2 five times, the Top 5 eight times and the Top 10 fourteen times. He has won 25 NHRA National Events and finished runner-up at an additional 33 events to date and captured 29 poles. His quickest elapsed time is 6.568 and his fastest speed is 209.85 MPH.

After earning his mechanical engineering degree from the University of Maryland, Jim worked as a patent examiner in the art of clutches and transmissions at the US Patent Office and Trademark office. In 1977 he decided to go into the auto parts business and eventually grew Yates Auto Parts to a successful chain of 23 stores and an automotive warehouse in the DC area. Yates decided to sell his business in 2000 to devote his full time and attention to NHRA drag racing.

Helping Jim along the way has been his family, who has played a big part in his success, both on and off the racetrack. Toni, his wife, as team manager is the heart of the command center for the Wiley X/Sea Ray Boats Pontiac GXP. Toni's role with the race team is multifaceted. She not only handles all of the administrative duties, she is also a valuable part of the crew.

Jamie Yates, who has served as his dad's crew chief since 2002, has recently handed over the crew chief duties to his brother Jon. Jamie has been involved with the family race team since he was old enough to hold a tool. Jamie also holds has Pro Stock license and has competed with his father as a two-car team on several occasions. He has recently returned to the University of Maryland to continue his education in Mechanical Engineering.

Jon Yates assumed the role as crew chief for his father's race team in 2008 after graduating from Clemson University with a Mechanical Engineering degree. Jon's role takes on many facets with primary emphasis in the strategy and tuning of Jim's Pontiac GXP.

Melissa, a sports marketing major from Clemson University has worked as part of the crew in the past. For the past three years, however, she has worked for Wiley X as the Director of Sports Marketing and is involved in every aspect of the Wiley X Eyewear sports marketing program.

Jim's NHRA racing career began in the bracket classes at Maryland International Raceway when he was just 16 years old. His first NHRA Pro Stock event was in Gainesville, FL in 1989.

* 2004: Advanced to a semifinal round finish at Gainesville

* 2003: Finished in the top 10 for the 10th consecutive season and 12th time overall; established career-best numbers for time and speed

* 2002: Qualified No. 1 seven times; Earned one win in three final round appearances

* 1998: Advanced to the final round at first three events, winning the title at Pomona 1

* 1995: Qualified No. 1 for first time in career (Brainerd); Finished second in the Pro Stock points


Partners and Supporters - Support Local Racing
Partner up with RacingJunk