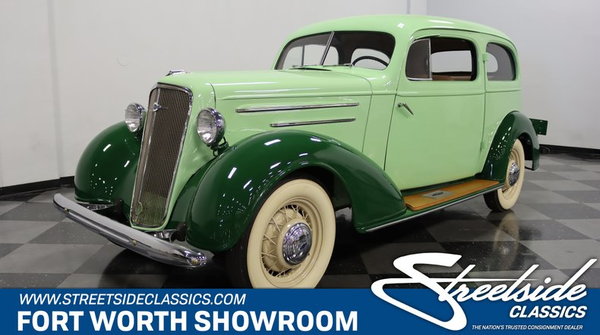 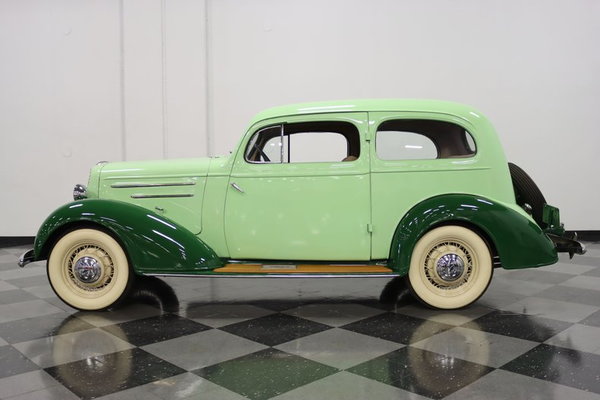 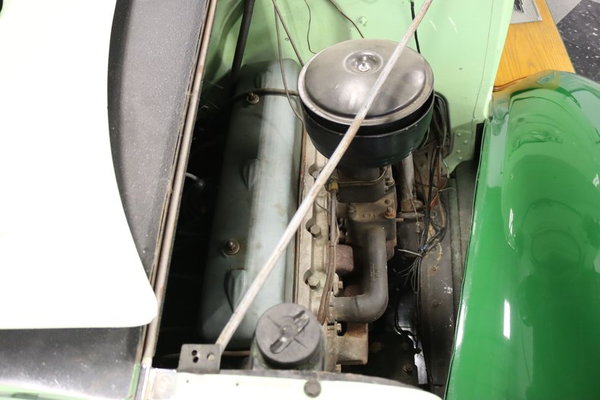 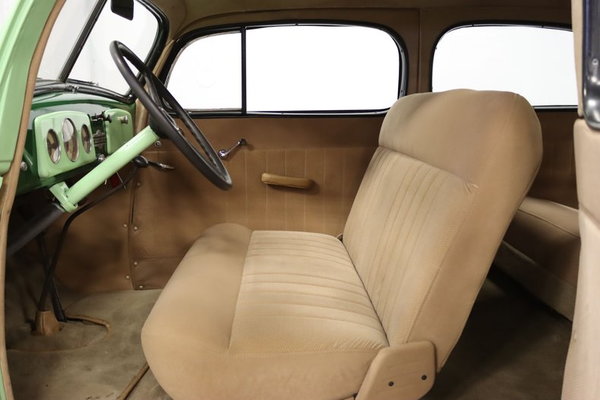 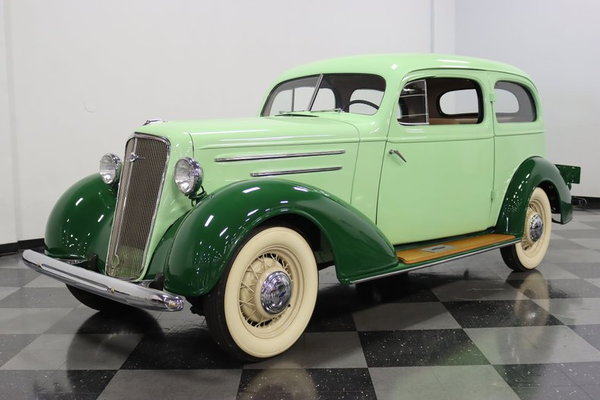 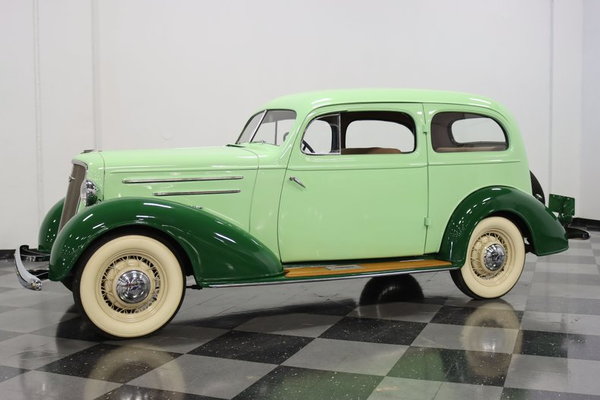 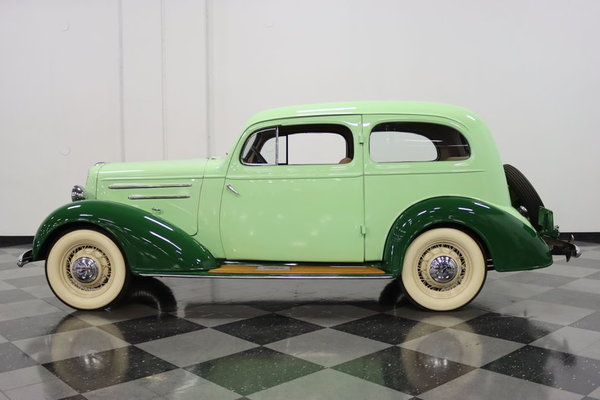 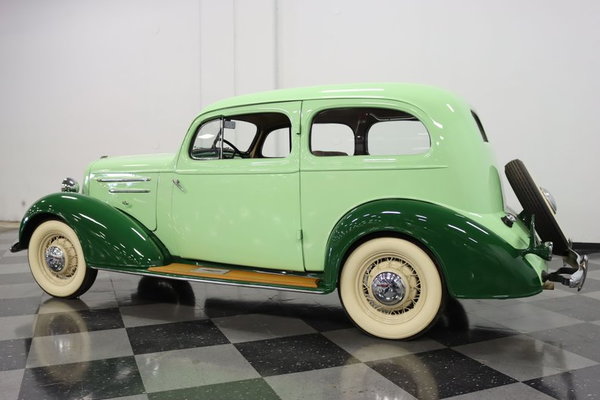 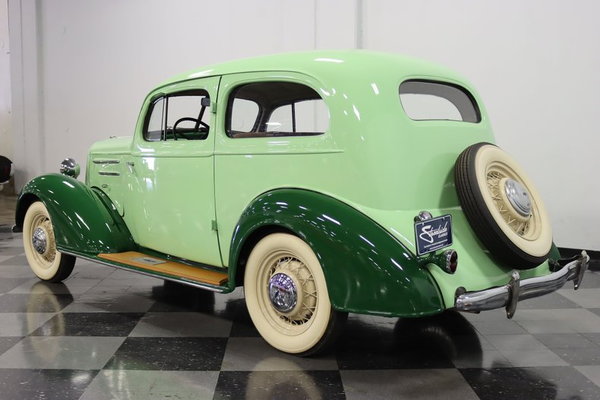 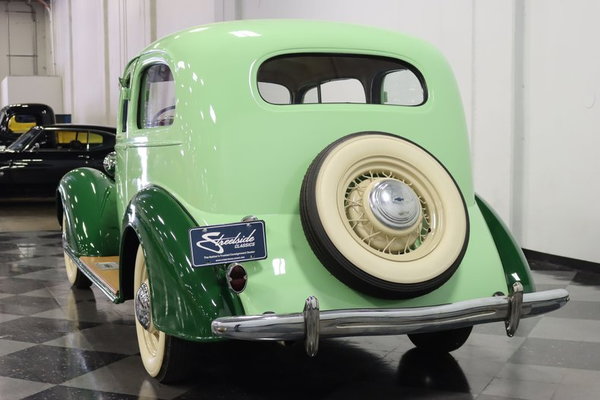 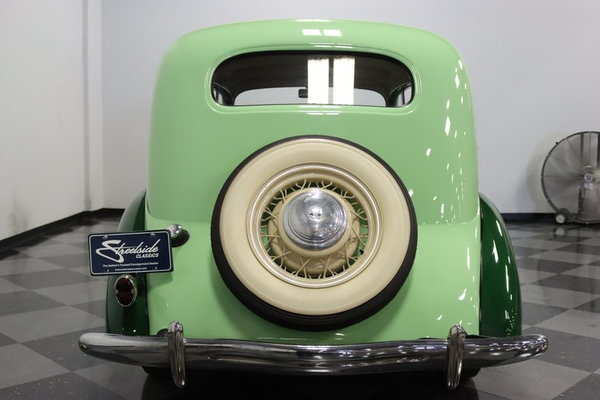 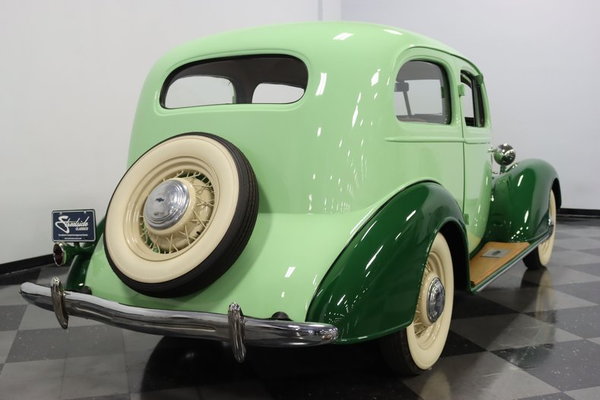 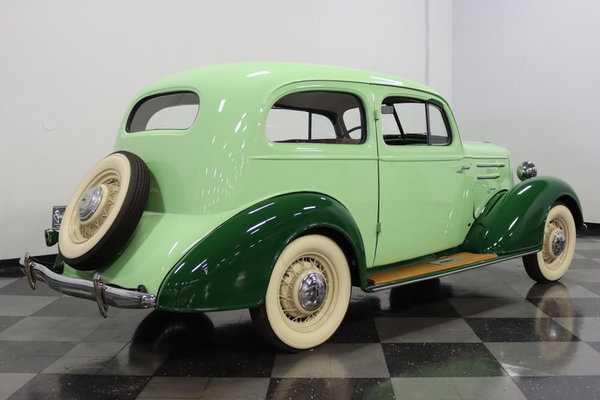 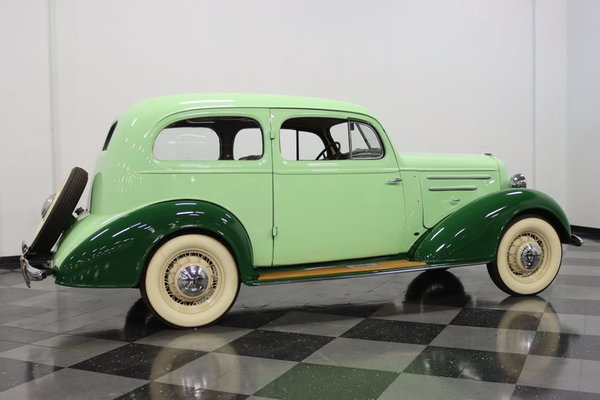 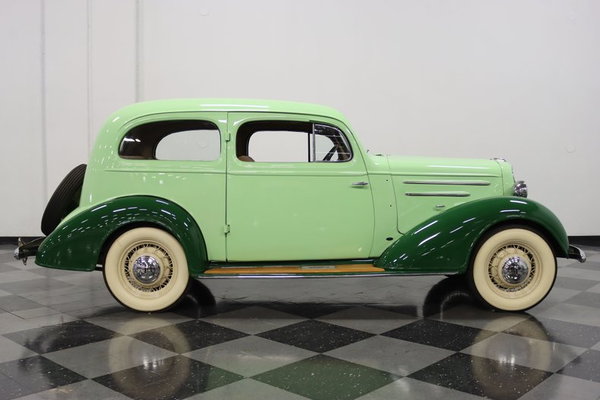 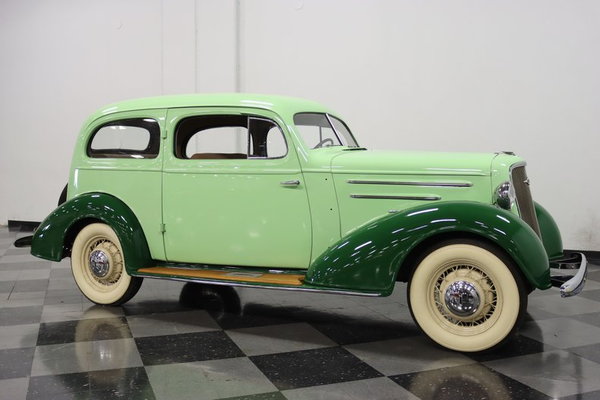 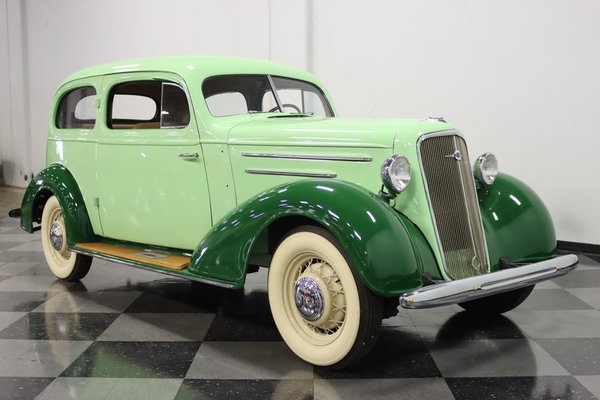 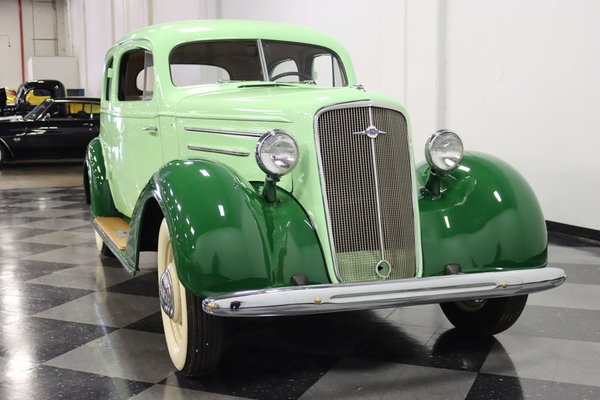 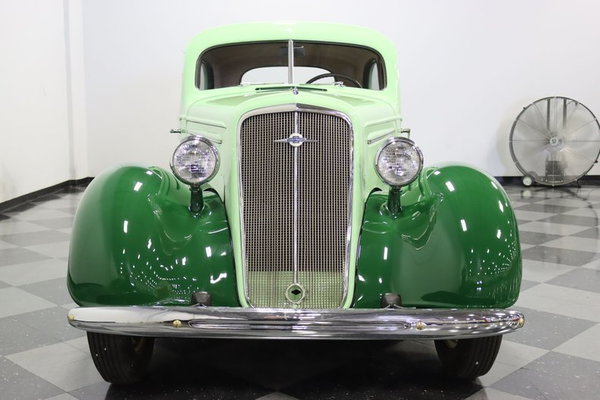 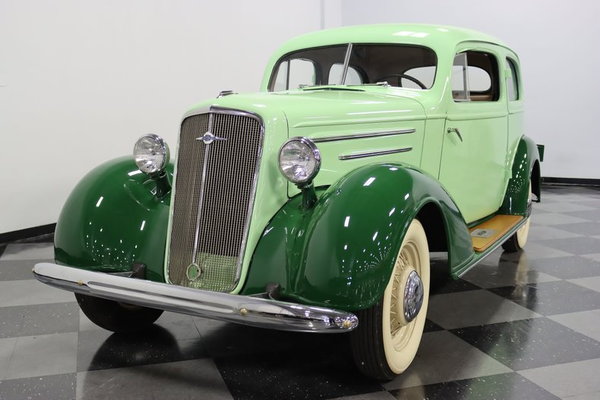 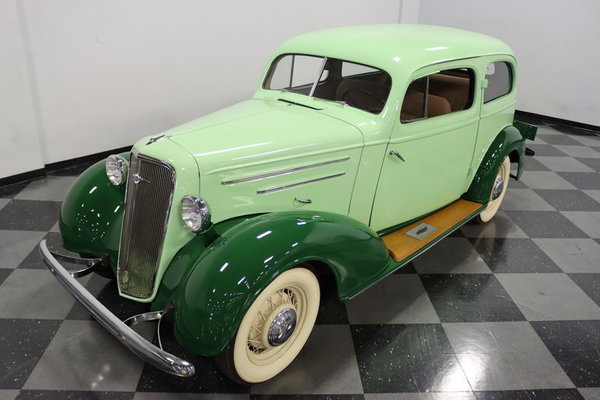 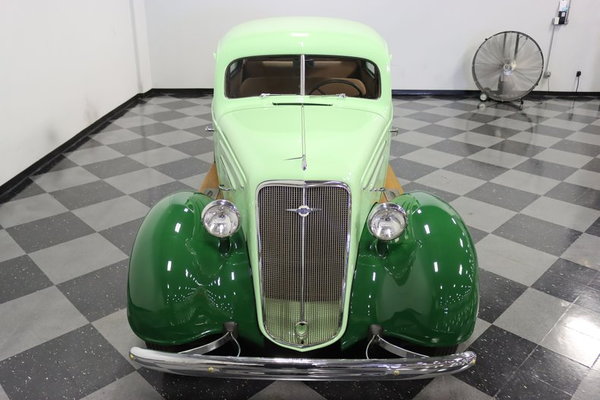 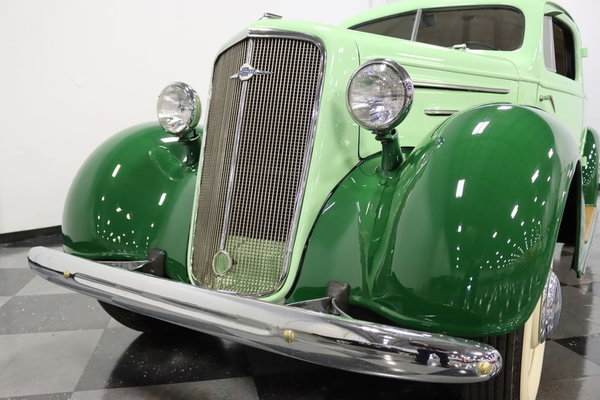 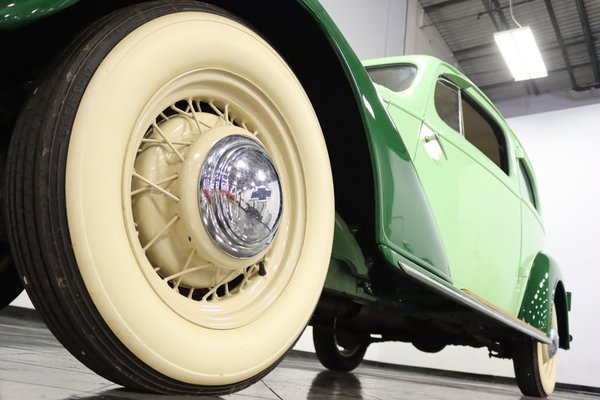 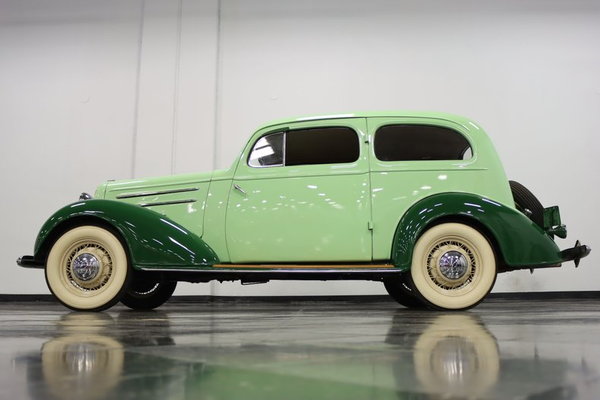 $21,995 Get Financing
Private Seller - streetsidedfw
FORT WORTH, TX , US

This brightly colored, restored-to-original 1935 Chevrolet Master Deluxe two-door sedan is a cheerful reminder of how our grandparents got around during the Great Depression. It's actually remarkably stylish and a lot of fun to drive, a testament to basic transportation when even affordable cars felt like top quality pieces.

OK, we'll admit that the two-tone Light Green over Dark Green paint job is probably worlds better than it was when it was new, but you have to say that this Chevy attracts a lot of attention. One reason is that it's not a Ford; when was the last time you saw a '35 Chevy? By 1935 Chevrolet had retired any wood in the build of the Master's structural parts, and that redesigned "Turret Top" platform that utilized all steel in the body and roof was an instant upgrade and subsequent hit with the public. It was restored a few years ago and the job was done to a very high standard, from the wonderfully ornate chrome grille to the flowing fenders to the very stylish rear deck treatment that makes this one stand out in a crowd. Big suicide-style doors give you great access to the interior and create one of the most attractive styling elements of the car and a nice balance between the front and rear windows, while the light-stained wood on the running boards or the most obvious reminder of the era. The paint is applied over clean and very straight sheetmetal, and patch panels are pretty much non-existent for these cars, so it was carefully smoothed and sanded rather than simply replaced by cheap re-pop parts. There's enough chrome and brightwork to give the Master Deluxe an upscale look, including the bumpers fore and aft, a nicely detailed hood trim, and a single taillight out back.

The interior is comfortable and traditional, with beautifully reupholstered benches fore and aft that look like furniture rather than car seats, and the effect of the subdues tan color inside is extremely appealing against the otherwise bright exterior. The cabin is specifically designed to allow good access to the spacious rear seat area and the custom cloth upholstery is tastefully done in period-style patterns that are highly durable for the modern world. The color-matched dash was restored/preserved to stock and mimics the two-tone color scheme of the exterior, the big steering wheel has likely been in place for almost a century, and the three-pod instrument panel is full of gorgeous, ornate original Chevrolet gauges. Flanking door panels match the seats, the plush tan carpets below insulate the cabin, and the headliner above might even be original – a rarity if we've ever seen one in a pre-war antique like this. It's as basic as it gets inside, as even radios were still cutting-edge and expensive in 1935, although with a healthy aftermarket of parts available to the public one could easily catapult this Chevy into the 21st Century if they wanted for amenities. Personally, I think this time capsule is exactly as it should be. You'll undoubtedly find that once you're behind the wheel, this handsome Chevy feels familiar and competent and the controls are easy to master, especially with that big steering wheel and easy-to-handle 3-speed manual shifter that's just a short reach away.

Part of the Chevy's familiarity comes from a 206.8 cubic inch inline-six (aka the 207), which was affectionately called the "Stovebolt Six", and even the "Cast Iron Womder" by many admirers. A predecessor for the soon-to-come Blue Flame engines Chevy hung their hat on for years, these motors were torquey, sneakily powerful (many argue they were faster than the Ford at the time), and dependable enough that even Toyota used the design for several decades. It's smooth and torquey and works remarkably well in the lightweight little sedan, pulling it in and out of just about any situation, even on the modern road. It's dressed in proper Chevy gray paint and the simplicity is alluring, with a single downdraft carburetor with oil bath air cleaner and easy service access. It still uses its original 6-volt electrical system, anchored by a stock-style battery for fast starting, so the driving experience is very authentic. By 1935, GM was using synchromesh on all their cars, even the affordable Chevys, so the 3-speed manual transmission is easy to shift and clutch action is light. The suspension isn't sophisticated, with a rigid axle at both ends, but it rolls over rough pavement with surprising aplomb and the 4-wheel mechanical brakes are effective given the car's performance capabilities. It's happy to cruise at respectable MPH with a smooth mechanical woosh coming from under the hood and a nice 6-cylinder grumble from the single tailpipe. Gorgeous wire wheels were all-the-rage in 1935 and carry simple, bright Bowtie hubcaps and a set of 17-inch whitewall tires that look period-perfect.

Affordable antique fun, this Chevy is competent, stylish, and easy to drive, which just happen to be the same reasons your grandparents were so fond of cars just like this. Call today!
View Full Description