RACINGJUNK GIVEAWAY - Check Out All of our Giveaways Here! - enter now
Motorsports March Madness on RacingJunk. Check up the matchups here
Previous Ad Next Ad 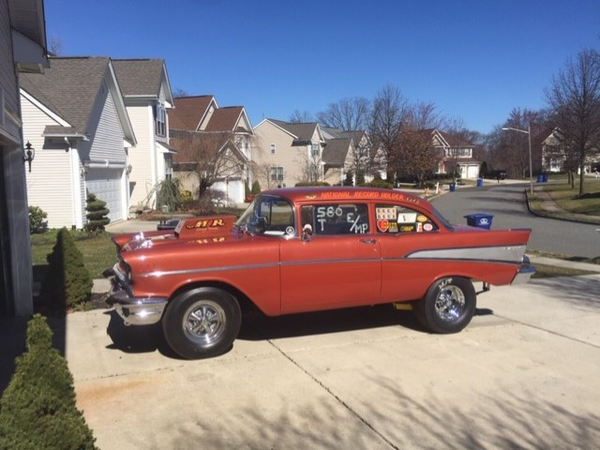 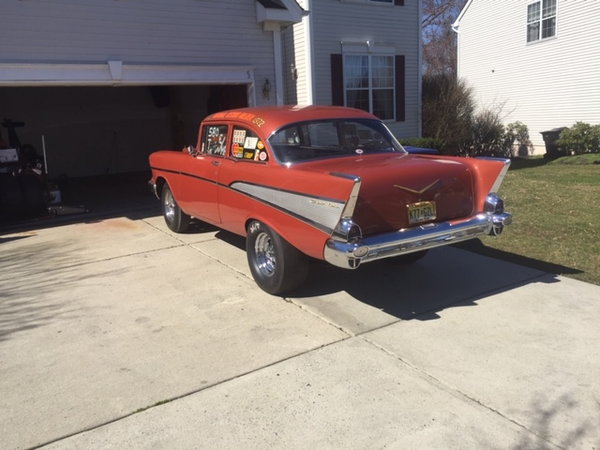 57 Chevy 210 Vintage Race Car. This is the M&R racing E/MP 1957 Chevy. It held the record for a few weeks in 1972 and competed in the 72, 73 and 74 Summernationals. Based out of Edison NJ, this car was a regular at Englishtown and I have documentation from its racing days. It was a streetcar in 1968 when the second owner, Laurie Rice, equipped the car with a CMS (Competition Machine Service) smallblock, a cast iron Borg Warner T10 4 speed and an Olds posi rear, and painted the car a beautiful cinnamon lacquer (Cadillac color). CMS was one of the premier engine builders in the northeast for serious smallblocks - they hand ported a set of 292 turbo heads and with ultra high compression and a tunnel ram, the motor screamed. The car immediately began winning races. Rice raced the car regularly from 71 through 74, setting records and winning class many times. The engine finally let go on the starting line at Englishtown in 1974 - see the picture! he grenaded the lower end and that was the last time the car saw the light of day until 2010. This car sat in a heated, climate controlled garage for 36 years until it was purchased from the Rice family. It now runs a mild 327 (with the original CMS top end) but everything else is exactly as raced in 1974. Amazingly, the paint and the chrome are original from the 60's and they are pristine!! The interior is the same tuck and roll that Rice had custom made in 68 and its perfect. Take a look at the pictures, the car is full of all the original early speed parts - the Jones Motorola Tach, Hurst Super Shifter, Stewart Warner Gauges, Hooker Headers, Edelbrock tunnel ram, M/T valve covers, Lakewood scattershield and slapper bars - its all the original stuff. The car even has the original Stahl front runners - I also have the original M&H slicks also but they were too dry rotted to run safely. By the way, all those stickers on the windows are original and real!

Super Chevy magazine saw the car at a York Dragway nostalgia meet and did a feature shoot on it. They called it "sentimental journey" and it was part of the Super Chey platinum edition for 2013. The magazine goes with the car. Forget about patina, this is a car that never deteriorated and it is an unrestored testament the love and care of the original builder. To own this car is a commitment to maintain it and show it so people can see how race cars really looked "back in the day". You can email me at [email protected] or call me on my cell phone at 201-953-1500
View Full Description