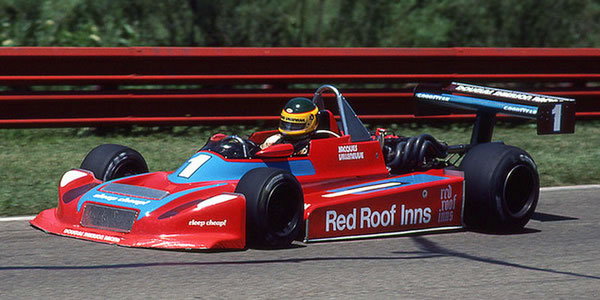 This is a March F/A car run in the 1981 SCCA Pro Atlantic series by Doug Shierson Racing. I believe it to have not been run since. It was the team's last year running Formula Atlantic before they switched to campaigning Indy Cars in CART in 1982. They ran three cars in '81 including this car and another for driver Jacques Villeneuve (Gilles' brother) who won the championship. I have full documentation on the available car with records kept by DSR. Please note that this is NOT the championship winning car, but one of the other two run concurrently with it. These drivers would have been either Tom Grunnah or Chris Kniefel. I have the documentation kept by the team on both these cars. Please note that the car in the photo IS the championship winning car and NOT the car available.

The car is currently completely disassembled and will require a lot of TLC before it is race ready. Almost every part will need attention. It is not intended as a car for someone to race later this year, but as a project which may take a couple of years in a home garage to complete. When approached this way, it is a true pro Formula Atlantic car which uses a Cosworth BDD, which can have money spent on it a little at a time rather than the big chunk required to buy ready-to-race cars. Similar cars are now going for around $75,000 when track ready.

After a rather extensive inventory of the parts, I can confidently say that all of the hard parts are included, except for two uprights - one front and one rear. The front uprights are identical to the March 80A parts and are available online. The rear uprights are unique to the 81A, but Shierson Racing had patterns made to cast these parts. These patterns are included. All other hard parts including A-arms, calipers, rotors, specific magnesium castings, exhaust headers, fuel cell, oil tank, radiator, radiator/nose mount, rack and pinion, steering shaft, steering wheel, set of BBS wheels, etc are included. It is easier to list the parts missing (the two uprights) than those which are included. I am very sensitive to the race car ads which say "Everything is there" and then items turn up missing. I have been to that circus before and do not want anyone who buys something from me to go through it. The car even comes with an extra tub and two sets of body work. Even the extra tall roll bar that DSR made for Kniefel is included. The normal replacement items such as battery, belts, wires, hoses, fire system, rod ends, etc. will need to be purchased separately. Engine and gearbox are not included. However, I do have some parts required to build a BDD including block, crank, head, cam carrier, pistons and a number of small items. Other parts will need to be procured to complete an engine.

If you want an Atlantic car that you can get into inexpensively and add the other items as finances permit, this may be a good opportunity for you. The car and documentation are in storage now and difficult to access for specific photos or for specific questions regarding races run, set-up info, etc. but please ask anything that comes to mind and I will try to answer accurately to the best of my ability. I do have photos of the parts laid out on the floor as the inventory was in progress and happy to send them via email.
View Full Description

Preferred method of payment is by bank wire transfer. Cashiers checks as offered by many scammers will not be accepted.