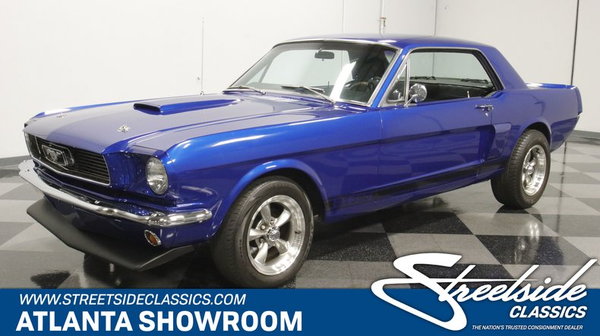 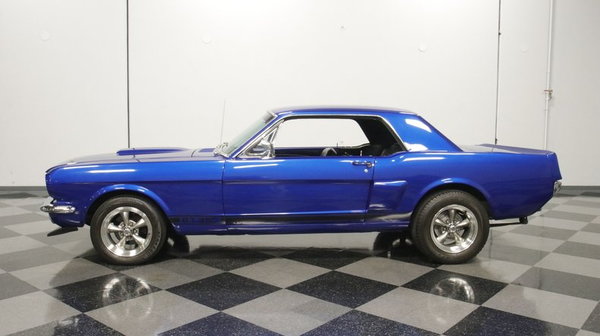 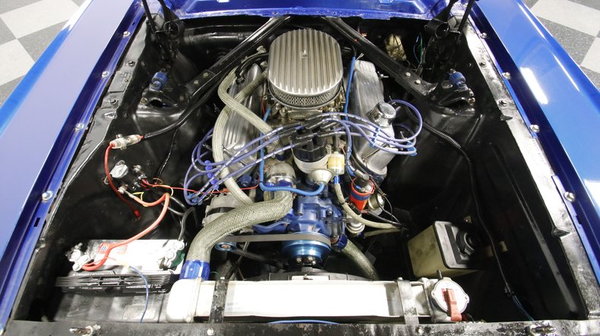 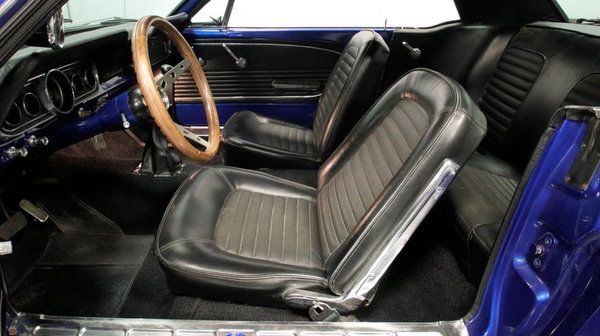 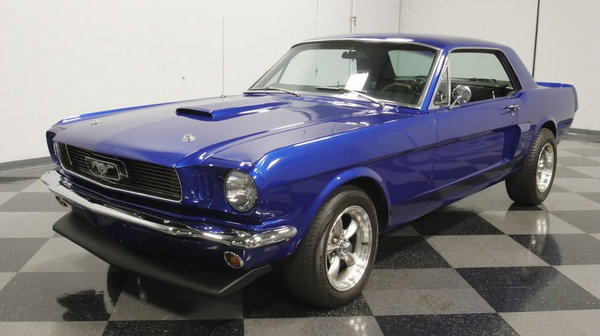 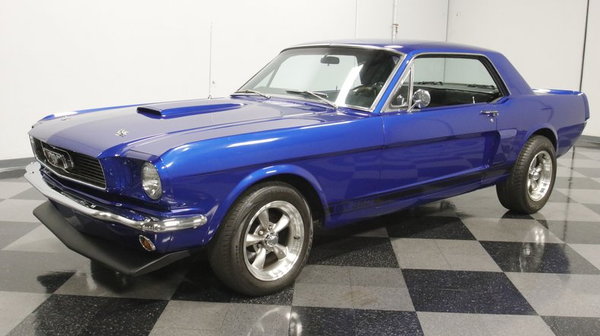 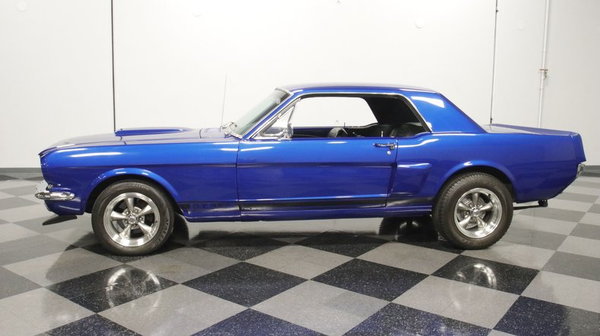 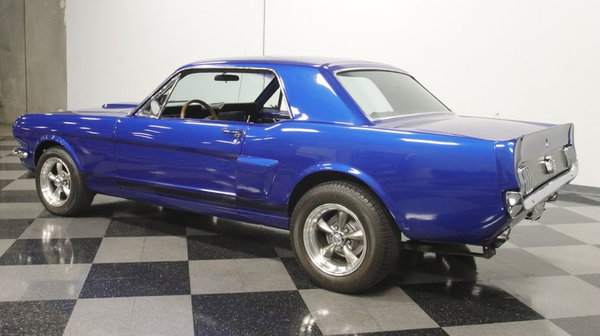 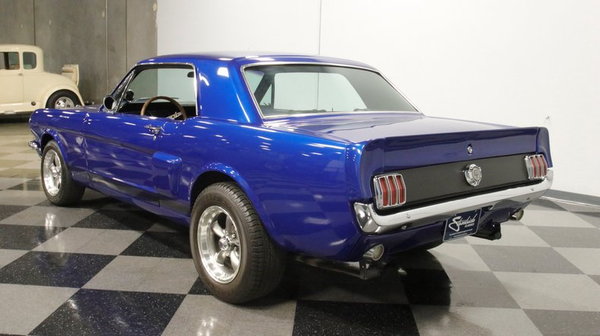 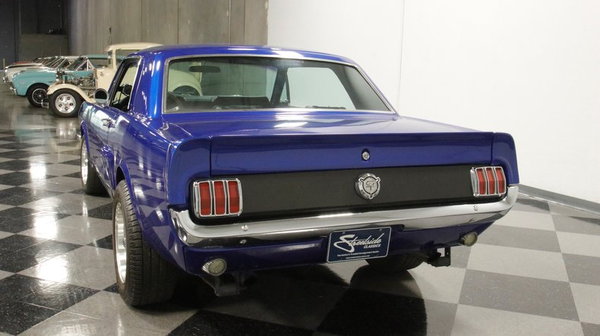 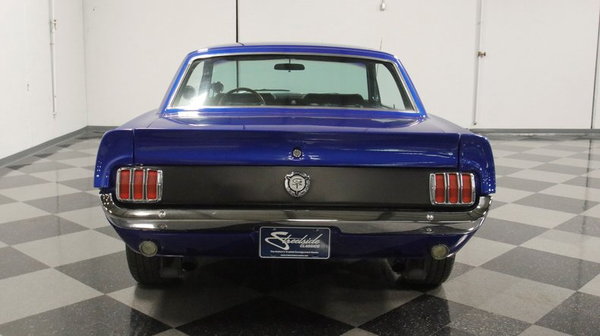 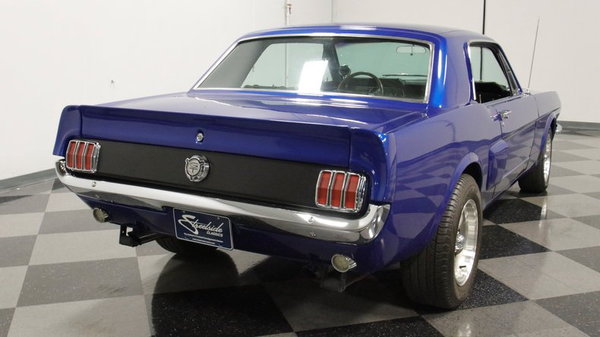 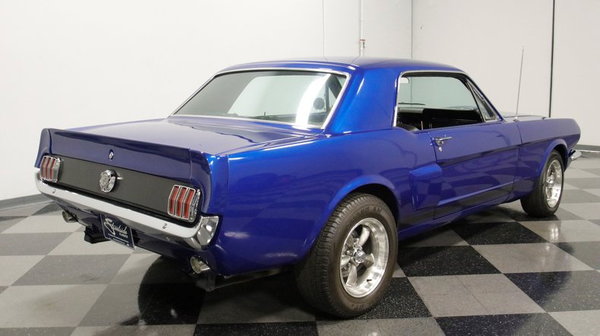 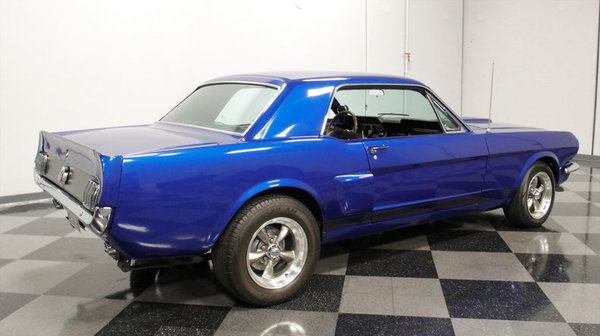 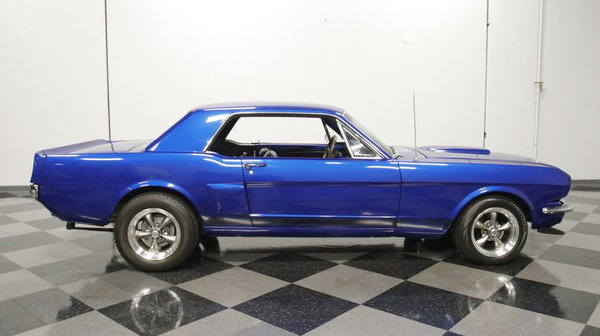 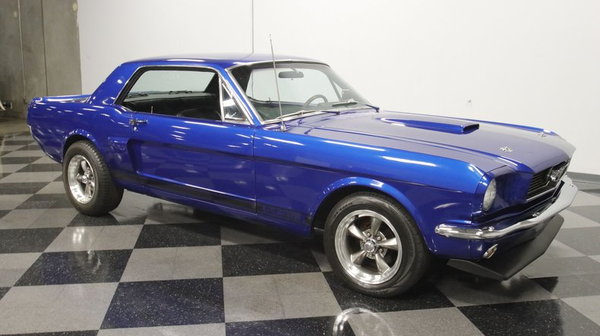 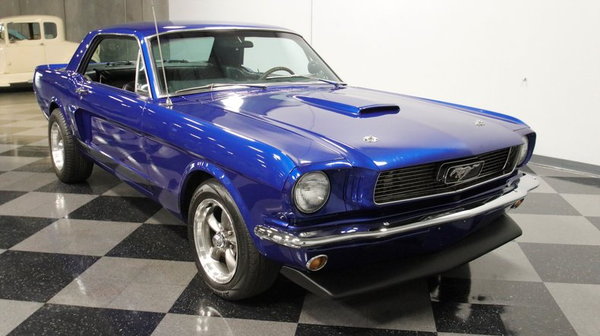 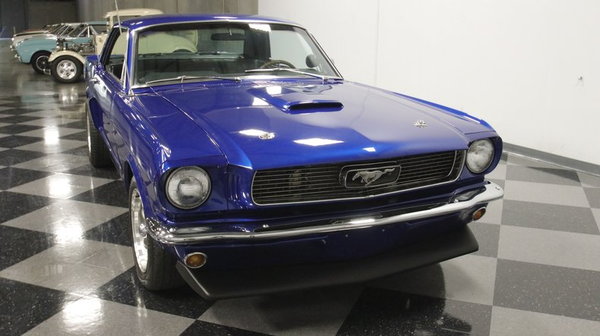 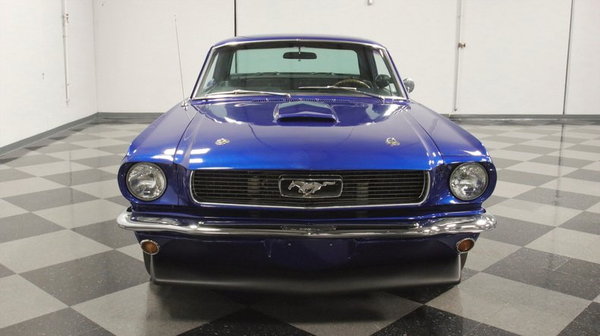 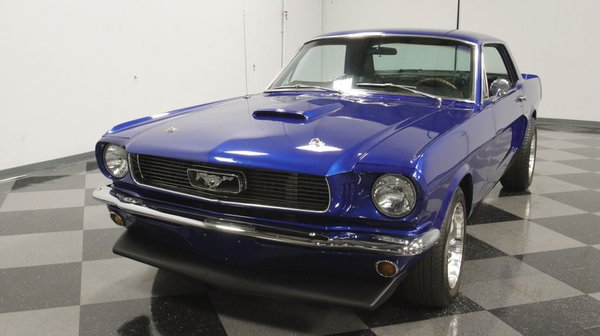 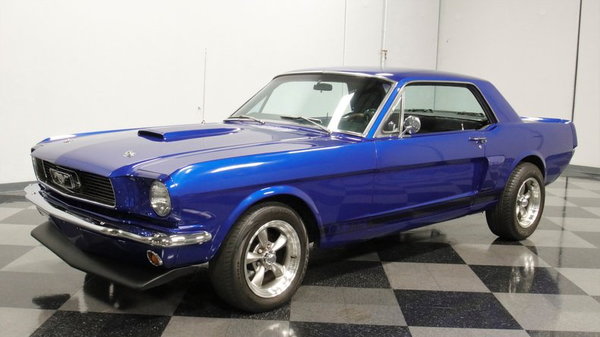 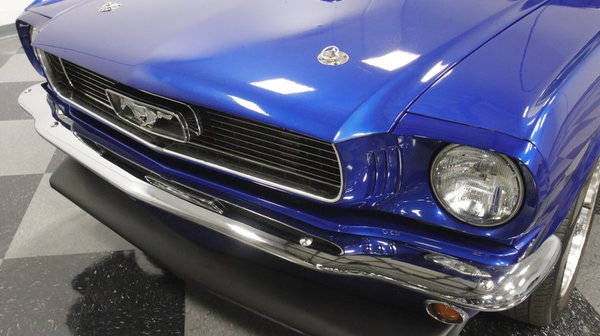 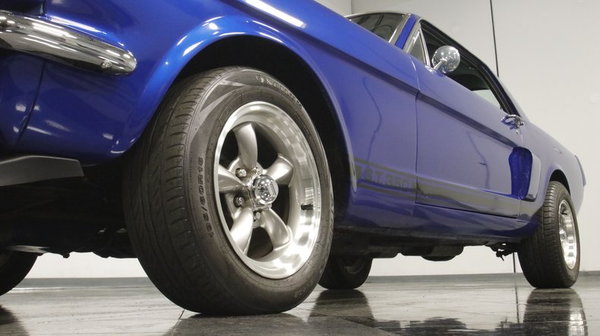 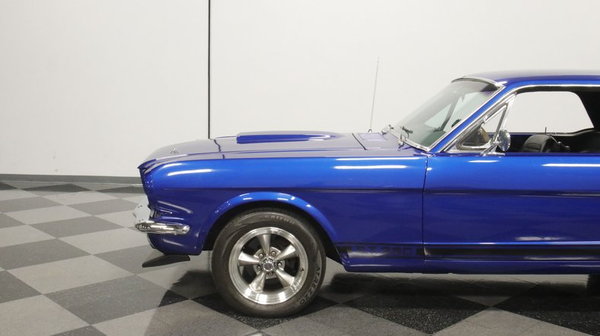 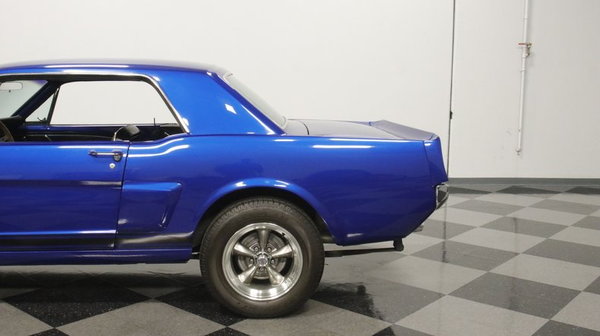 With all the merely "pleasant" Pony Mustangs around, it's nice to see one that walks with some swagger. Dig the stance of this 1966 Ford Mustang GT350 Tribute Restomod - the slick blue paint and Torque Thrust wheels, the great-running 351 V8 full of the good stuff, a smooth-shifting 4-speed automatic transmission, and the fresh black interior that's sporty and all-day comfortable. The only thing it doesn't have is a pack of Luckys rolled up in its shirt sleeve, because the attitude is perfect.

Dark blue always looks fantastic on vintage metal, but on this car, it's really more of a disguise. A low-profile coupe with serious blasting powder under the hood doesn't really need to advertise too much with obnoxious loud paint. Since most guys won't expect much of a fight from an early Mustang Pony, it's easy to take advantage of them once you stand on the gas pedal in this street brawler. Of course, that doesn't mean the bodywork isn't straight, because it certainly is, and it's obvious that considerable time and effort were invested in the paint booth getting the Blue finish to sparkle. It's been enjoyed out on the road since it was completed so it's no longer a perfect trailer queen, but it does have a wonderful shine and deep luster that still knows how to turn heads. And if you wanted to restore some former glory and go chase a trophy or two at your local car show, a professional buff-and-polish would kick it up that extra notch. Clearly the builders were thinking carefully about curb appeal when this car was coming together, and slick additions like the front chin spoiler, the hood scoop and hood pins, the GT350 ducktail-style rear end, and the contrasting black GT350 stripes on the lower body and tail panel really separate this beauty from the crowd. It also carries a nice batch of shiny chrome, including sparkling bumpers fore and aft, bright trim-work around the crystal clear glass, and the classic 'galloping stallion' front grille. Out back, you get a sporty GT gas-cap and bright red taillights to match the crystal-clear headlights up front, and the 'Old Style' American Racing Torque Thrust wheels complement the dark blue livery perfectly.

More significant investment happened inside, where comfortable bucket seats anchor the super-clean, fully restored black vinyl cabin. The original style seats are all-day comfortable, and just like the clean matching seat out back, the upholstery is fresh and showing almost no signs of use. Blue-on-black is an awesome color combination that works perfectly on this vintage Mustang, and the matching black door panels, plush carpets, taut headliner, and fresh dash pad really dress things up inside. Other smart upgrades include a fat wood-rimmed steering wheel, a Lokar shifter in between the seats that manages the AOD transmission below, and a Sony AM/FM/CD that feeds a set of upgraded Sony speakers in the kick panels, package shelf, and a Visonik subwoofer in the trunk. GT-style factory gauges keep an eye on the 351 V8 under the hood, and we love that they're all right in front of the driver where they should be, only augmented with a SunPro tach mounted on the A-pillar that keeps a close eye on the revs. The rear bench was upholstered to match, and out back the trunk is finished with spatter paint and a heavy-duty mat, and it includes a space-saver spare tire assembly.

No early Mustang is complete without a feisty small block under the hood, and the snarky 351 V8 that powers this pony has a few upgrades that make it a blast on the street. Up top, there's a Holley 4-barrel carburetor, an Edelbrock performance intake manifold, and an upgraded Accel ignition/distributor system, and with the beautiful lope this small block has at idle, even more so when the taps are open at higher speeds, we wouldn't be surprised if there was an upgraded cam inside as well. Finned aluminum valve covers and a matching open air cleaner dress things up under the engine bay, as do the steel-braided hoses, blue spark plug wires, and correct Ford Blue engine enamel on the block itself that helps it pop out from the blacked-out inner fenders and firewall. An electric fan kicks on automatically to keep the engine nice and cool, and it starts instantly with a great performance Ford small block bark – there's simply nothing else like it. That excellent soundtrack is punctuated in large part from the block-hugging headers that breathe easy through the fresh dual exhaust and Flowmaster mufflers that produce an awesome throaty burble. A smooth-shifting, 4-speed automatic transmission with overdrive is exactly what you want in a vintage street fighter that you actually want to cruise on modern roads and highways, and you're certainly not going to hurt the heavy-duty 8.8 inch rear end by having a little fun on the street. It drives beautifully with rack-and-pinion steering, upgraded struts and shocks, and a sway bar up front, and it stops with authority thanks to a thoughtfully added power front disc upgrade. Killer 15-inch American Racing Torque Thrust wheels look great and wear staggered 195/60/15 front and 235/60/15 rear performance radials with plenty of tread left.

Fast fun in a universally loved shell, all freshly built only 6,592 miles ago. Treat it as your show-off piece or just take it out and tear up some pavement, it's hard to make a mistake with an awesome restomod Mustang like this. Call today!
View Full Description