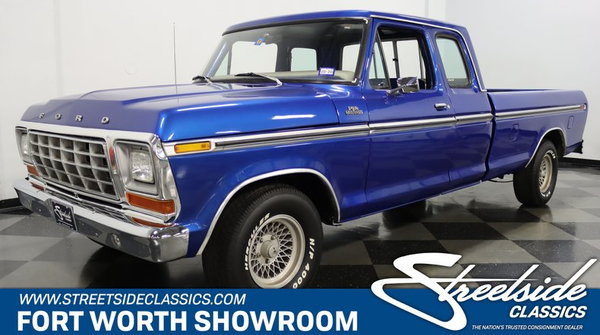 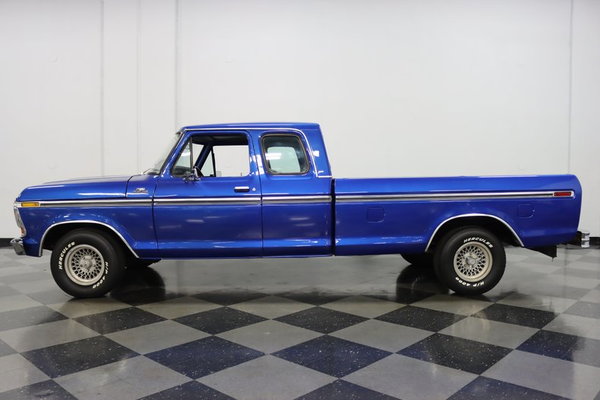 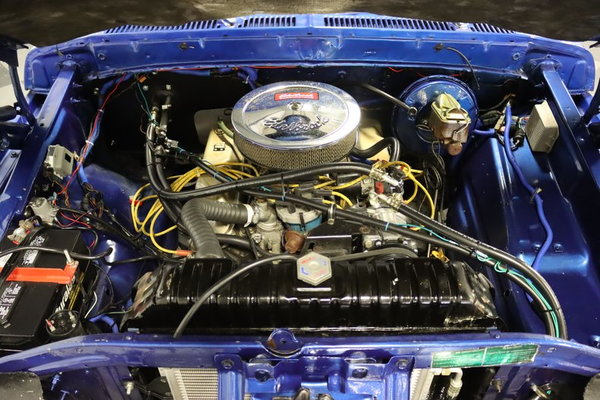 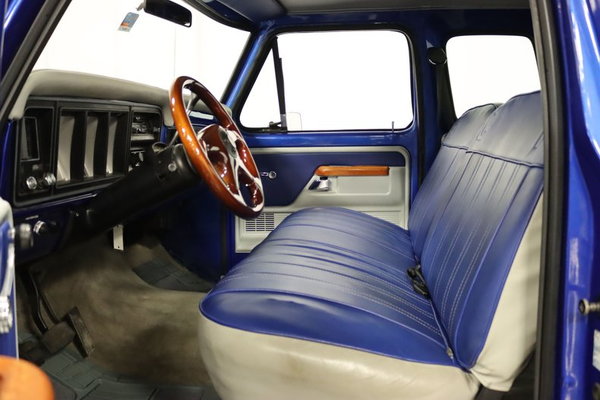 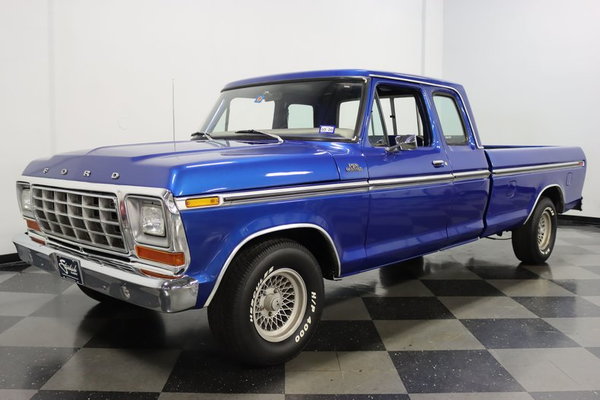 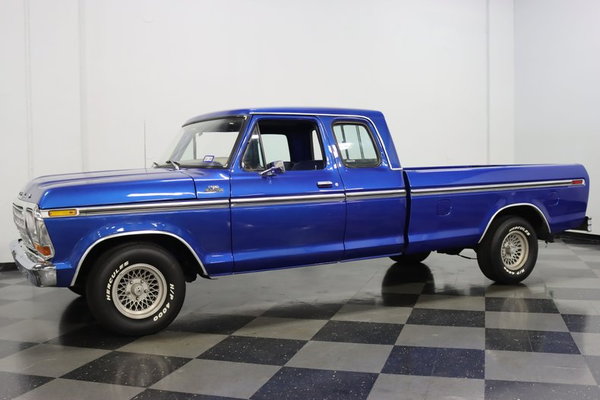 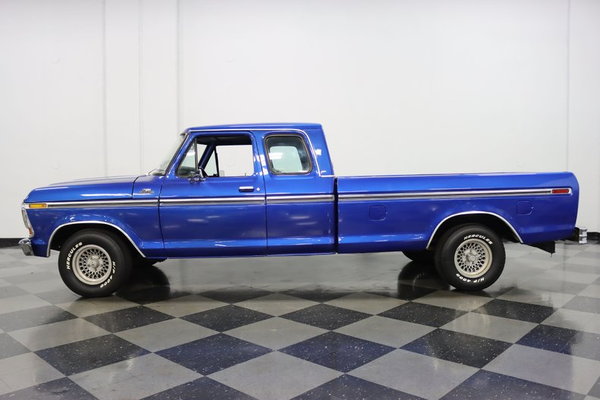 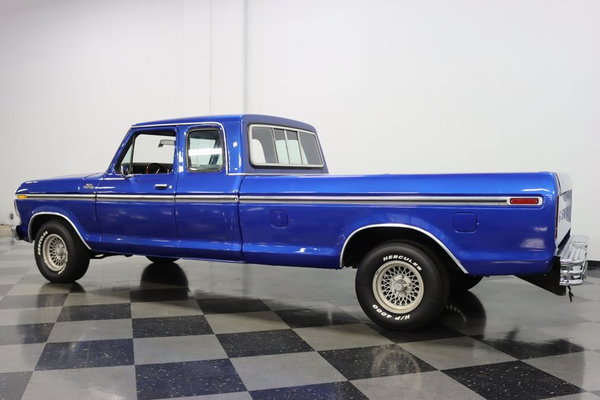 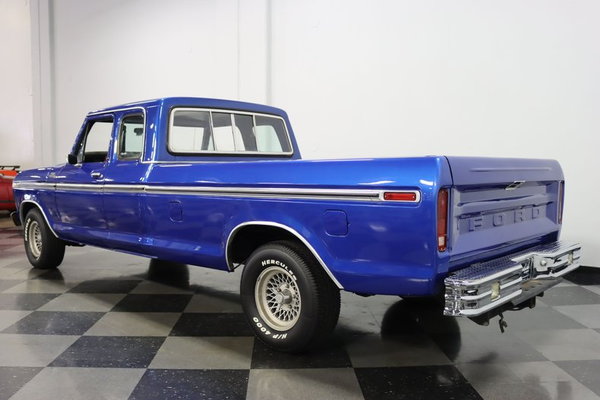 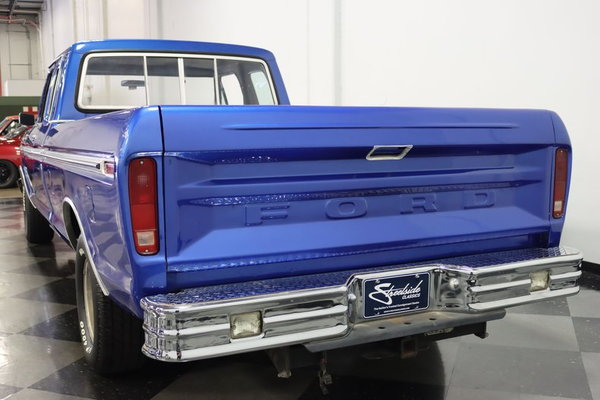 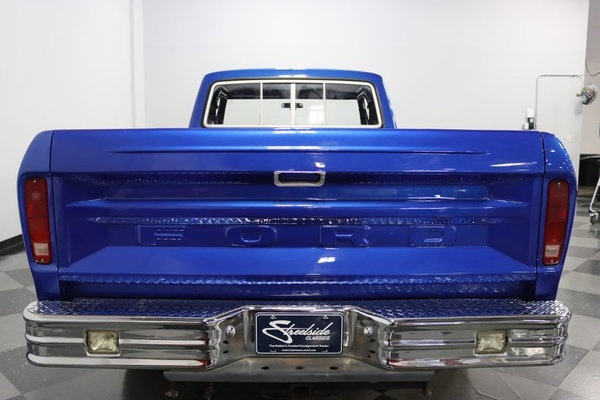 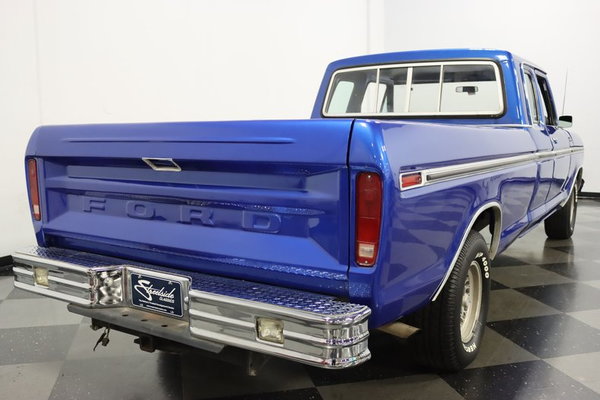 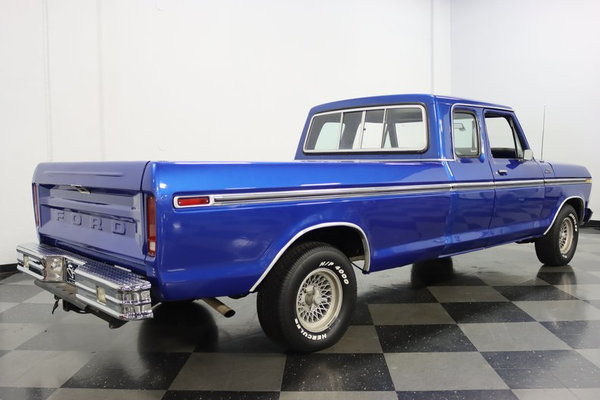 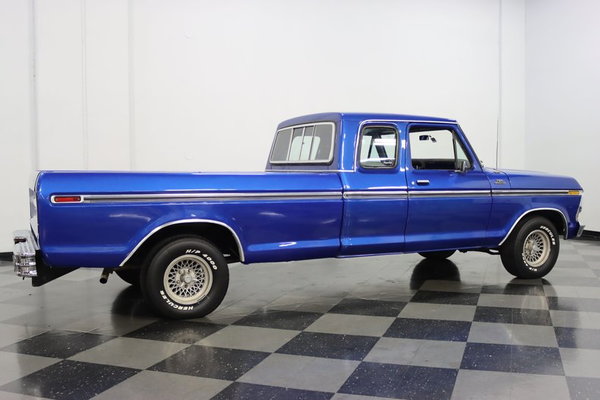 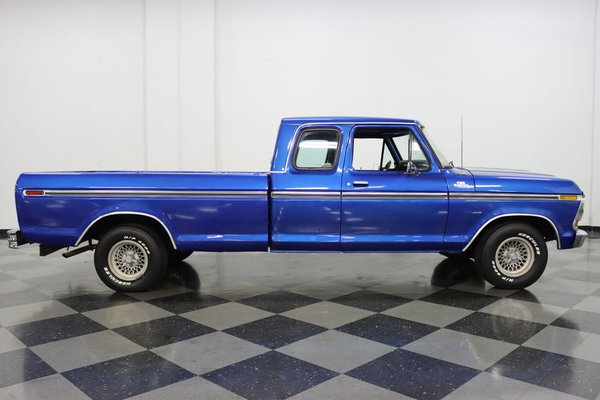 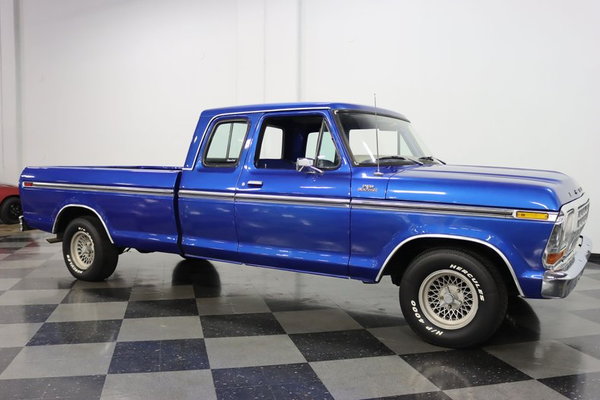 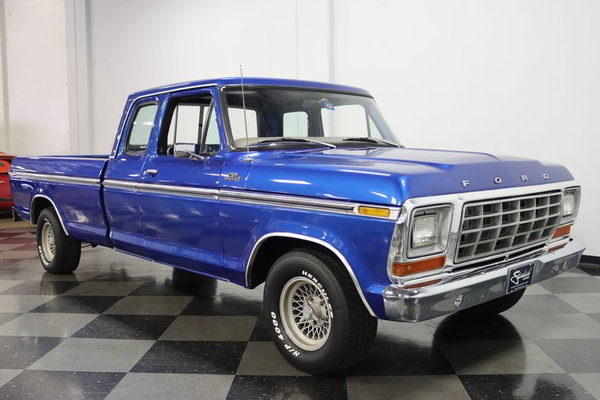 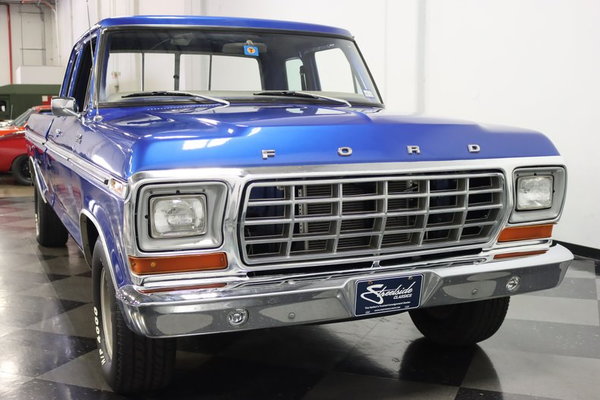 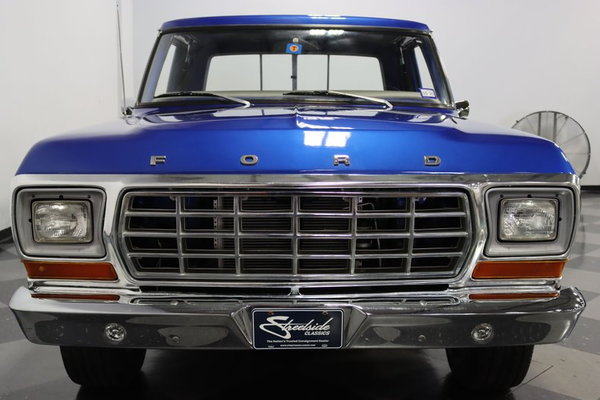 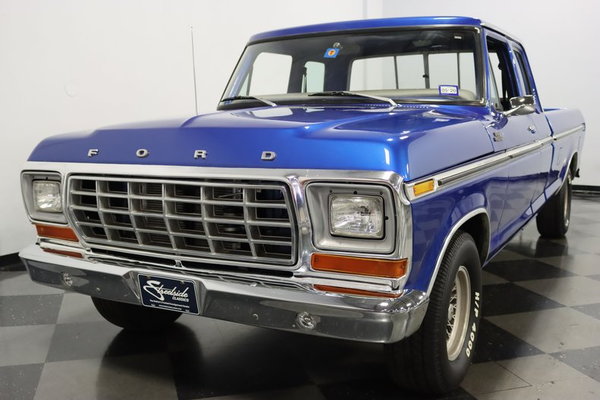 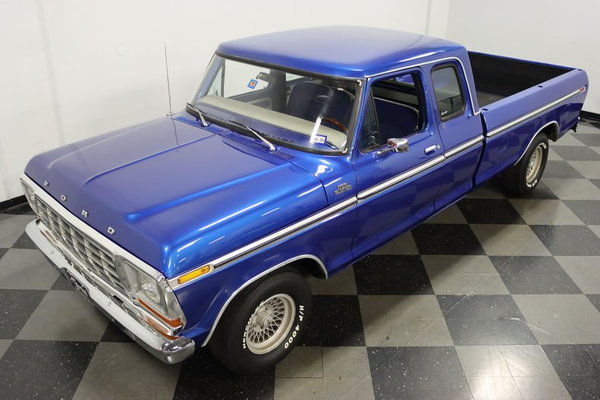 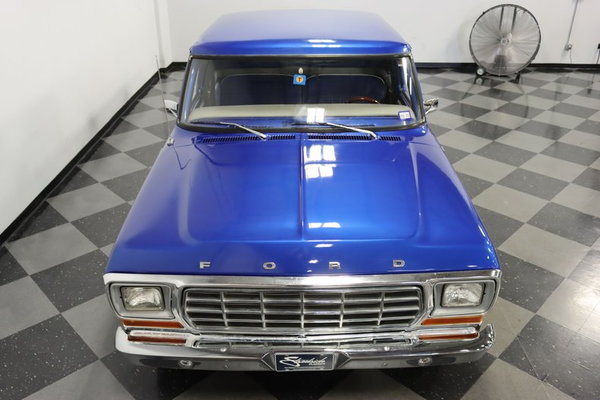 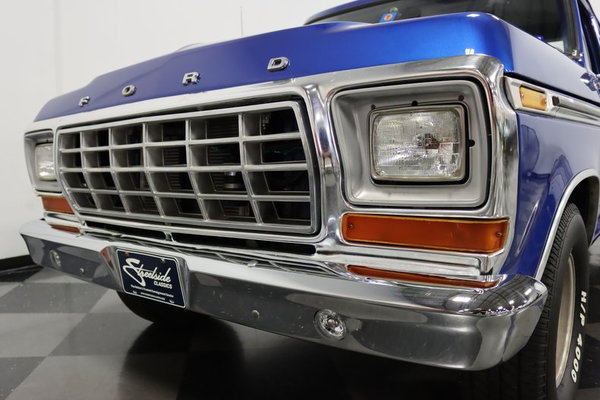 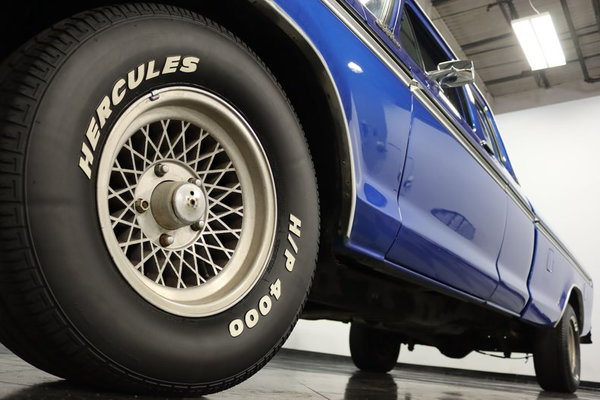 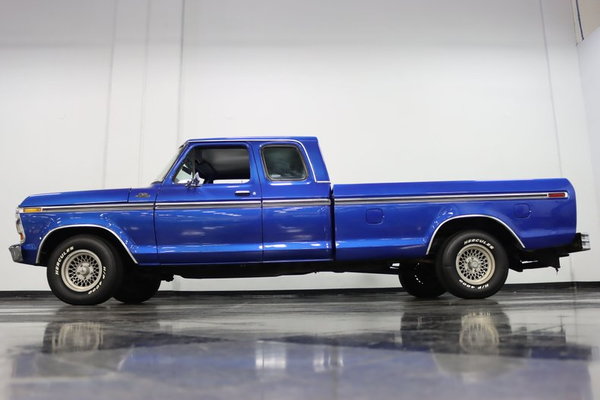 Perhaps you noticed that big old pickups are suddenly very popular. Trucks like this 1979 Ford F-150 extended cab pickup are not only unusual, but they're useful as well. Combined with a long list of options and very nicely finished, this Ford is the brute force way to experience the great outdoors.

It really is almost too pretty to risk beating up in the dirt, but that's what this F150 lives to do. The paint was done not long ago the way the factory would have, not too perfect to be used as intended but handsome and rugged-looking. With an 8-foot bed, that's A LOT of sheetmetal to straighten and smooth, so it probably took a small army of guys to get it looking this good and about ten gallons of paint. The doors fit well, the chrome and trim was all reinstalled after the paint was dry, and bed is in great shape with a heavy-duty rubber liner, which means that filling it with lumber for your next big project won't hurt it a bit. Upgrades include a front bumper with built-in fog lights, a heavy-duty diamond plate rear bumper with built-in back-up lights, and a sliding rear window.

Trucks have come a long way since the 1970s, but there's a certain appeal to the no-nonsense interior of this F150. The bench seat is wrapped in fresh blue and gray vinyl that's seemingly impervious to dirt and with short-nap carpets on the floor, you really don't have to worry about making a mess because it's all so easy to clean. Some fake burled walnut trim warms up the interior and with the wood on the dash and the neatly grouped instruments, you'd almost think that the guys over at Mercury were in charge of the F150's interior design. You also get a pair of jump seats in back, making this a somewhat more spacious truck for the family than you'd expect. This one has a few notable options including aftermarket A/C, as well as a C6 3-speed automatic transmission, power brakes and power steering, and somewhere along the line someone upgraded the radio, although it's probably due for another one. Add in the luxurious wood wheel and matching arm rests and you get a truck that feels far more luxurious than you'd expect.

The 460 cubic inch V8 is nicely preserved and runs great. The only notable hardware change is a Holley 4-barrel carburetor, but it does come with some dress-up parts like the chrome air cleaner and bright yellow plug wires. Power steering and brakes are really the only way a truck like this is even possible, and underneath the hardware is all heavy-duty for no worries in the rough stuff. The fresh paint job was quite thorough, as the engine bay is finished to match the bodywork. There's an original-style single exhaust system that makes the Ford quiet and while the chassis isn't spotless, it's pretty darned solid and shows off a good life up somewhere away from salt and snow. The factory suspension was augmented for heavier loads, but ride quality isn't horrible and on those big truck tires and handsome alloy wheels, it rides and handles pretty well for such a big brute.

Big trucks can do big jobs, and there's not much that this Ford isn't willing to tackle. Better still, it's a rare find so it'll stand out among all the ordinary tow vehicles everywhere you go. Call today!
View Full Description