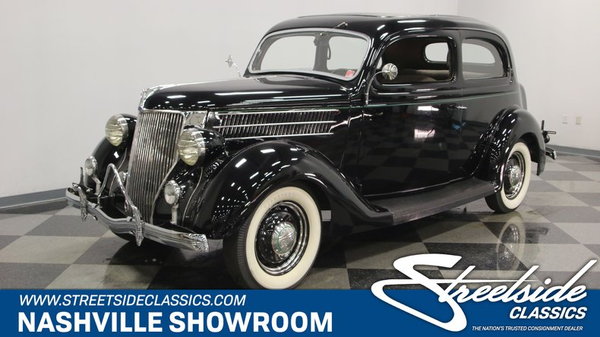 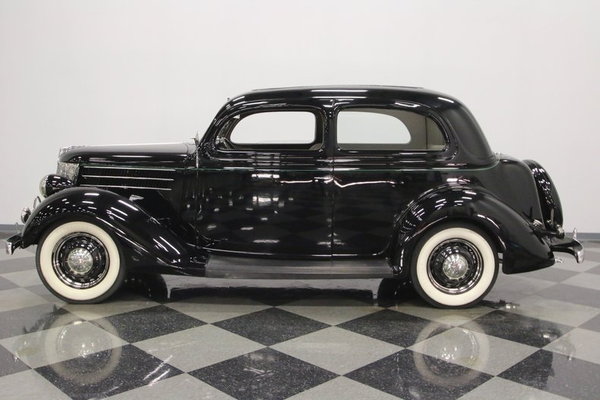 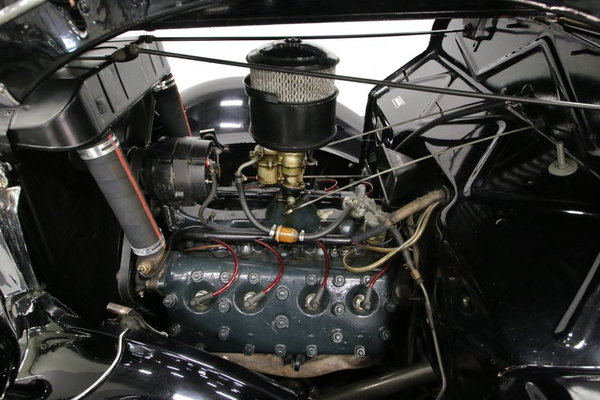 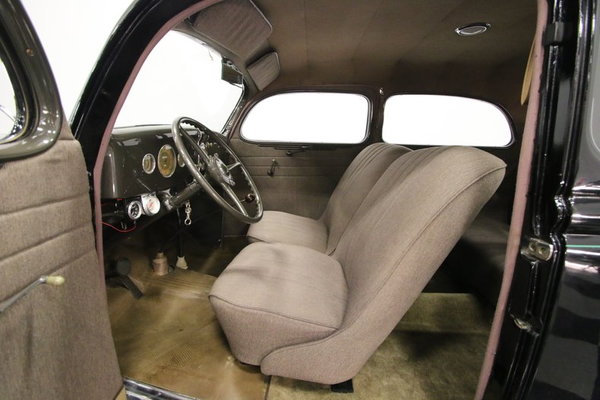 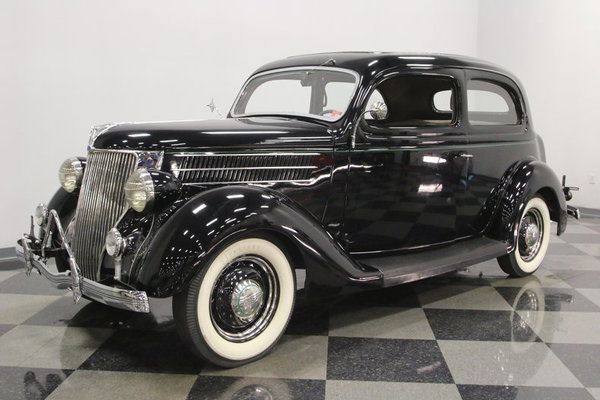 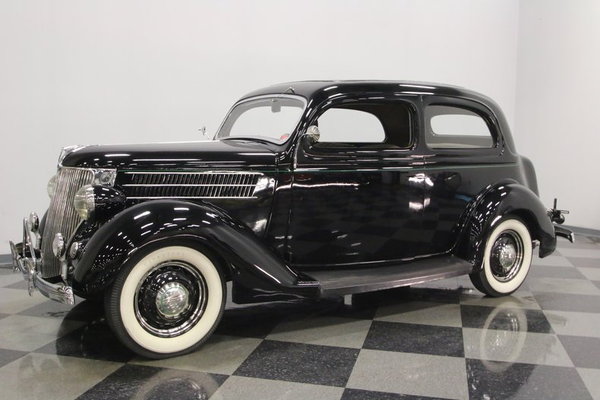 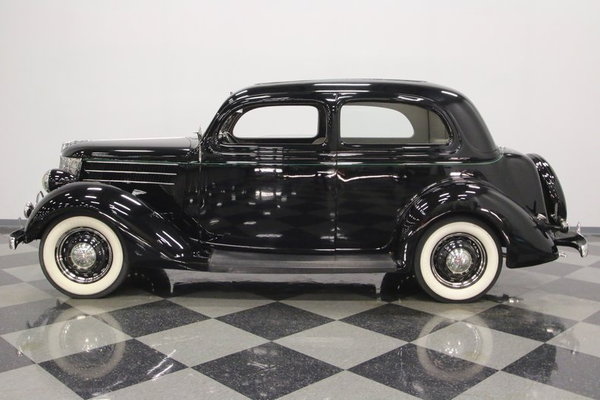 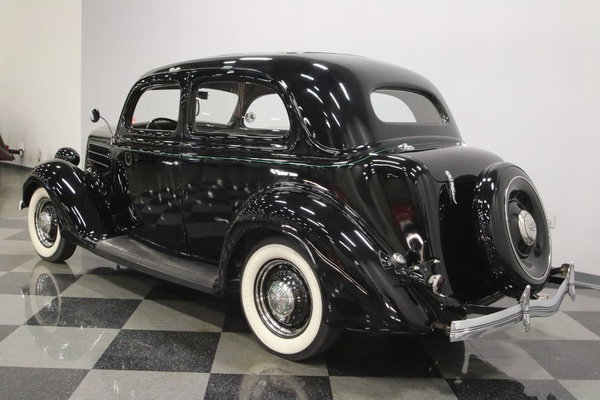 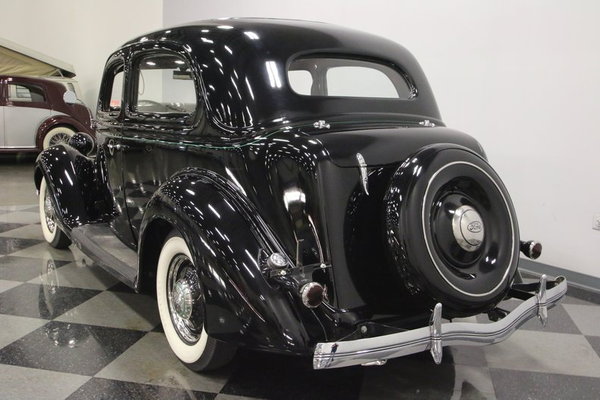 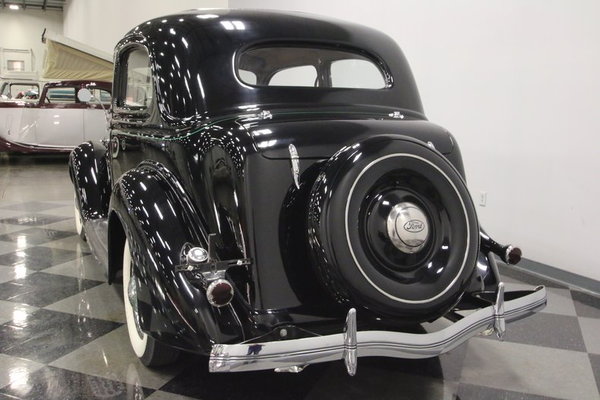 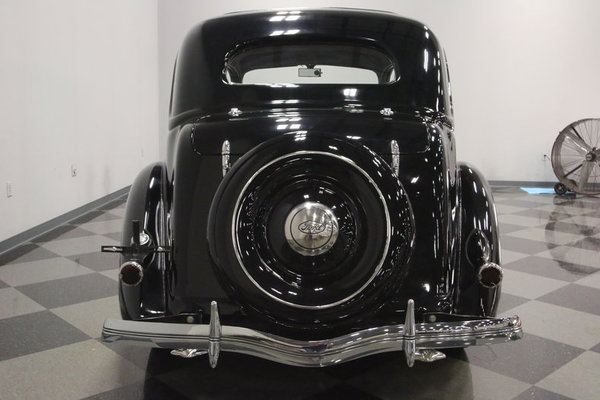 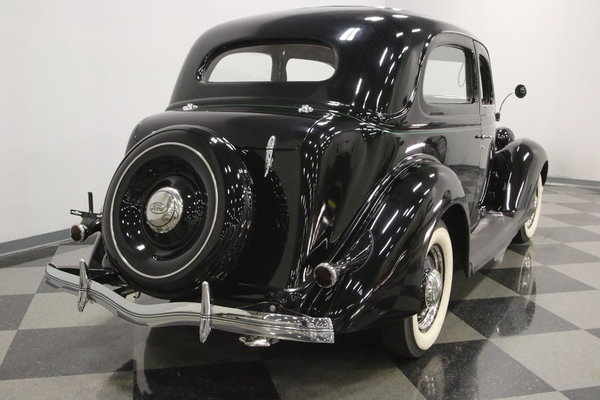 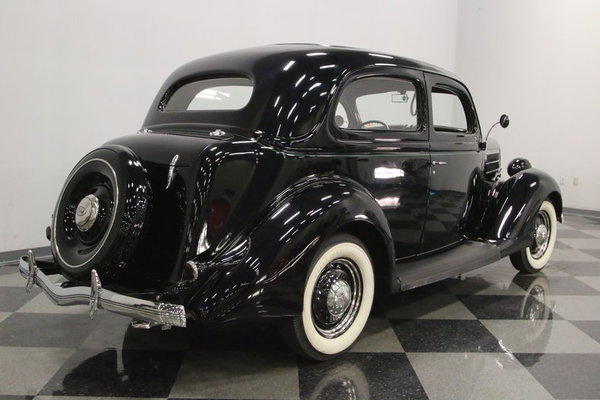 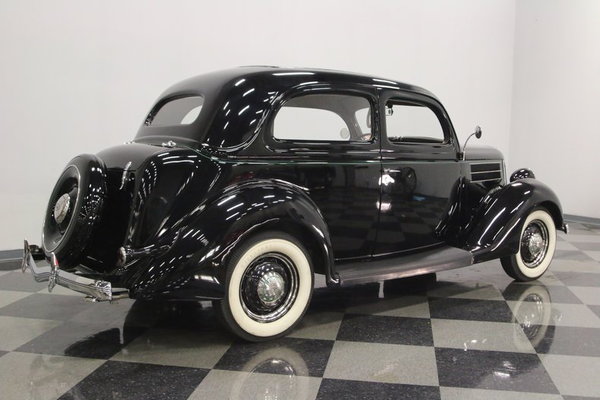 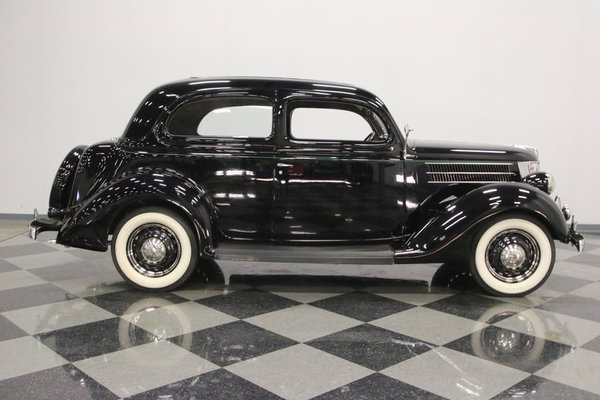 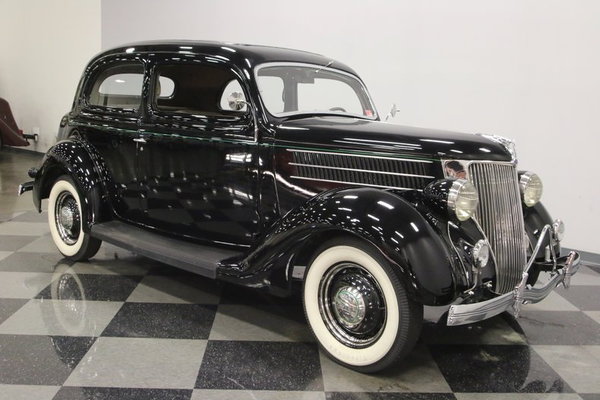 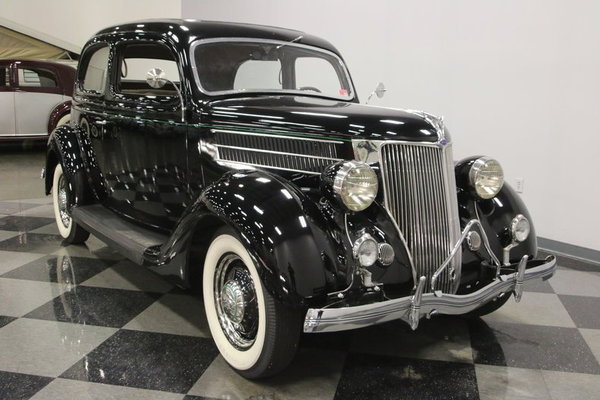 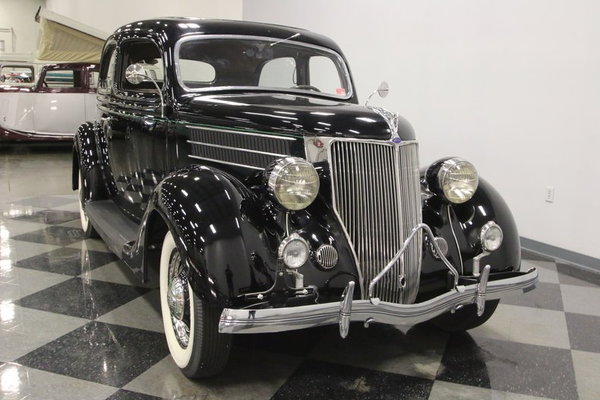 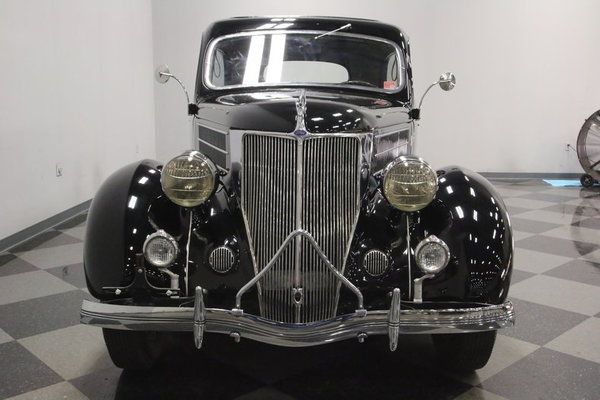 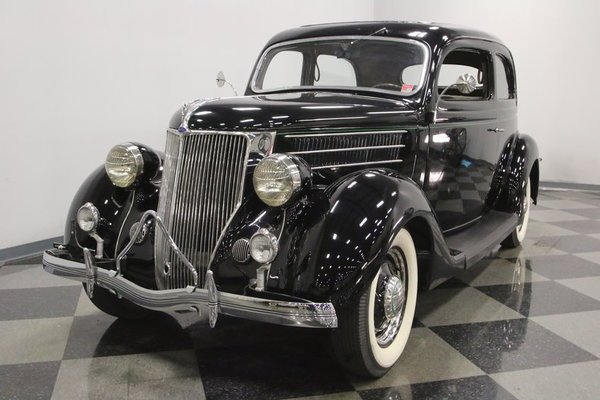 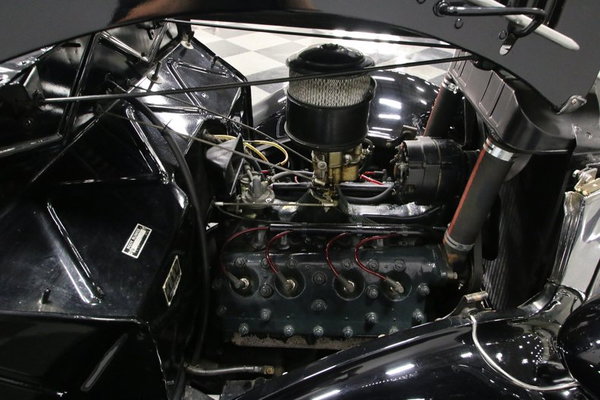 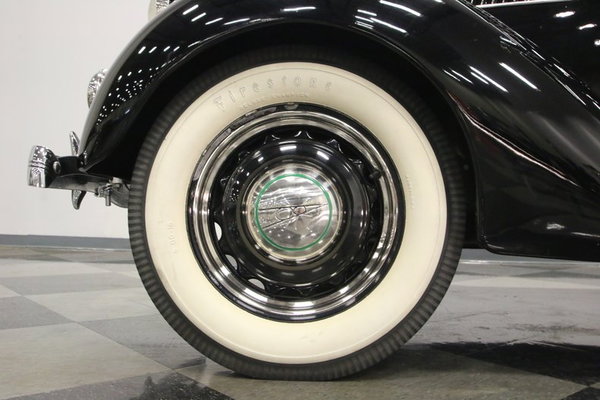 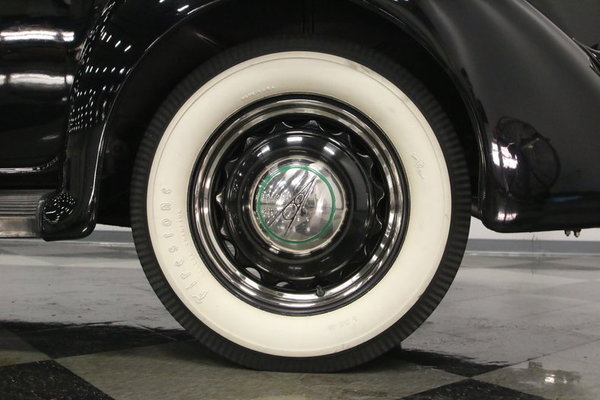 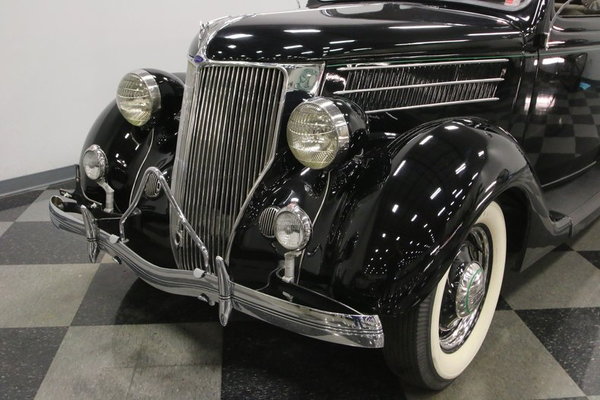 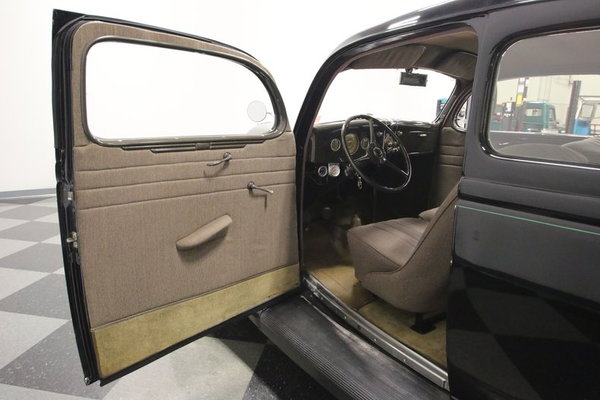 Everyone has their favorite year of Ford V8, and mine is the 1936. The one-year-only styling combines the traditional upright grille with a streamlined body to create one of the best-looking cars of the period, no matter the manufacturer. This rare 1936 Ford Tudor Sedan with its integrated trunk is a neat 2-door pre-war car that shows off all of Ford's early styling cues.


If you admire the 1936 Ford like I do, then you'll definitely appreciate the extra mile the builders went on this handsome Tudor. Fortunately, it hasn't been chopped or smoothed into a run-of-the-mill street-rod, leaving all the original steel as it was when it was new. The gently rounded fenders with their peaked crease through the middle, the highly detailed hood vents, and practical yet stylish trunk with integrated rear-mount spare tire, it has all been transported intact from 1936. Finished in Henry Ford's favorite color, high-gloss black, it looks sensible and nicely finished, with a high-class air to it, much like a tuxedo. A single green pinstripe encircles the tudor to break up the paint just a tad, and it's seen again as a nice little accent on the chrome hubcaps. All the original brightwork was replaced with new bling, from the neatly dipped bumpers to the door handles to the original taillights and unique side mirrors. But most striking is that chrome grille, a large ornate piece that looks like amazing on this Ford.


The fully restored light gray cloth interior is newer throughout and has that conservative but flashy look that worked so well in the 1930s. Look at the handsome dark paint on the dash and window moldings, the original-style three-spoke steering wheel, and the delicate bright trim running down the center of the dash. Who says inexpensive has to be plain? There's a rubber floor mat up front, in typical Ford fashion, but plush carpets in back make it feel like first-class. Gauges feature delicate pointers and soft beige-on-cream faces that look elegant without being too showy, and they're augmented by a set of auxiliary gauges to the left of the steering wheel. The three-speed manual transmission shifts easily and the driving position is upright and comfortable. There's plenty of room in back for two, maybe three in a pinch, and the trunk offers above-average space for a weekend's worth of touring.

Ford's flathead V8 really needs no introduction, with this one being a correct 221 cubic inch version with 21-stud heads. The stock carburetor offers snappy throttle response and despite the smallish size of the engine, there's plenty of torque at any speed. This one has been upgraded with a 12-volt alternator for added reliability, but otherwise runs the way Henry intended. It wears proper green paint, correct coolant hoses, and a bare aluminum manifold, so it has a familiar look. The three-speed manual gearbox shifts nicely once the synchros are warmed up properly and the front end shows signs of maintenance like the engine bay, so it tracks straight. Brakes are still the original mechanical drums, but don't write them off until you've tried them, because they're surprisingly effective. A more modern exhaust system was added for a great soundtrack, and the undercarriage, while original, remains in great order. Beautiful steel "spider" wheels with beauty rings and "V8" hubcaps add just the right amount of glamour and it rolls on correct 16-inch Firestone wide whites.

A delightful little car with a nice collection of maintenance records, this V8 Ford would make an ideal tour car that's also at home on the show field. Call today!