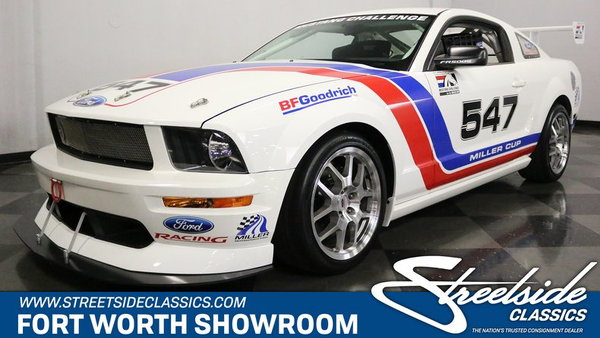 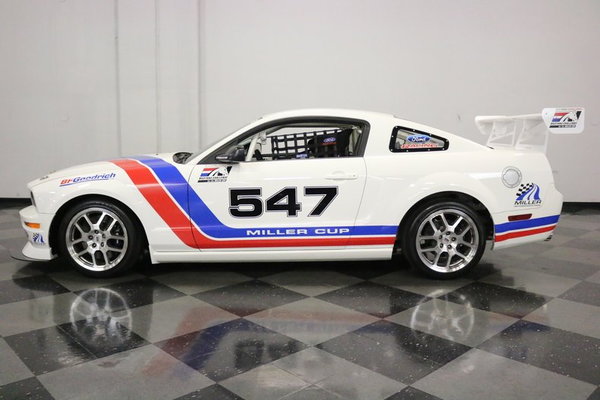 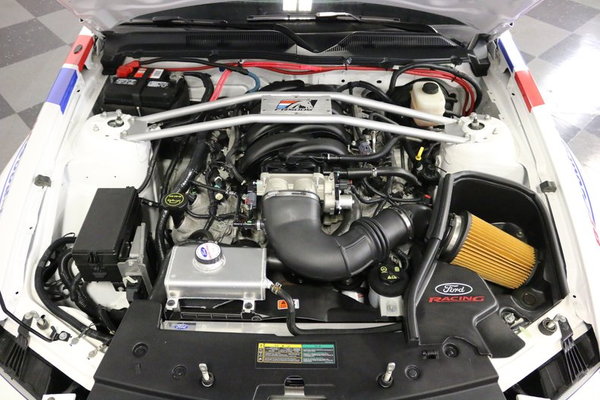 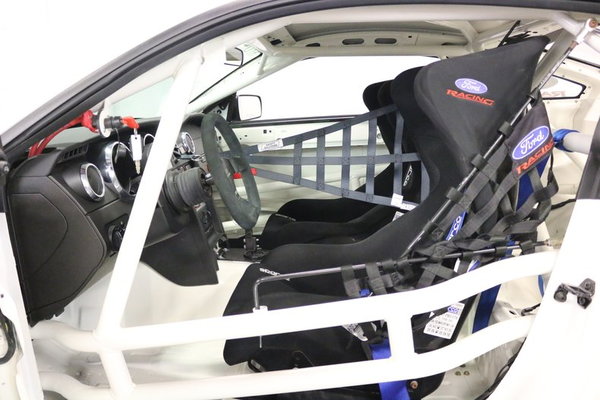 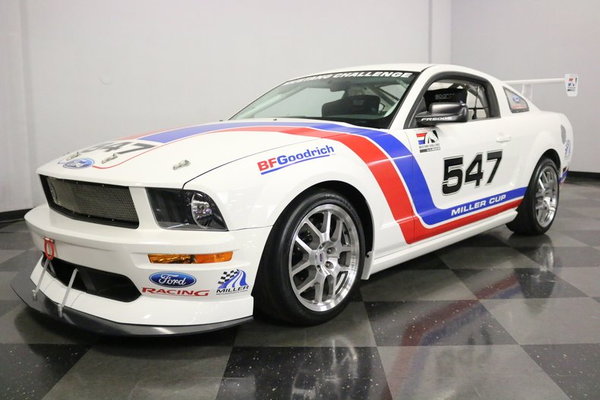 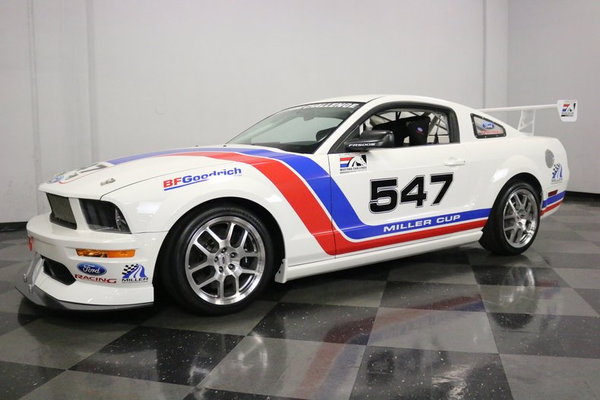 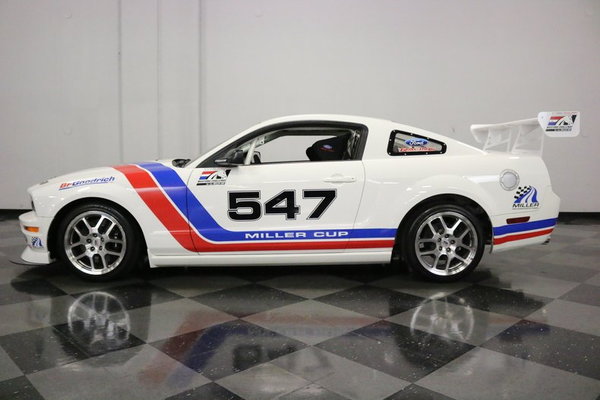 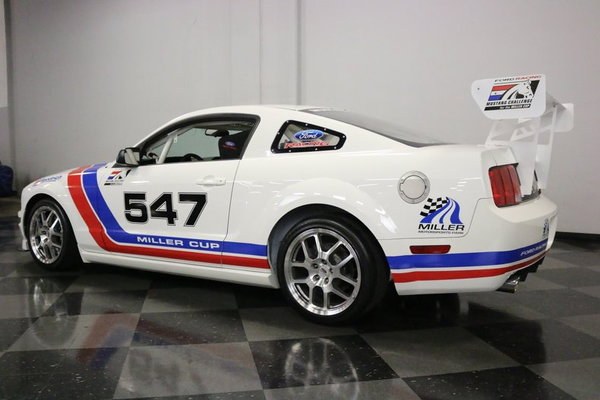 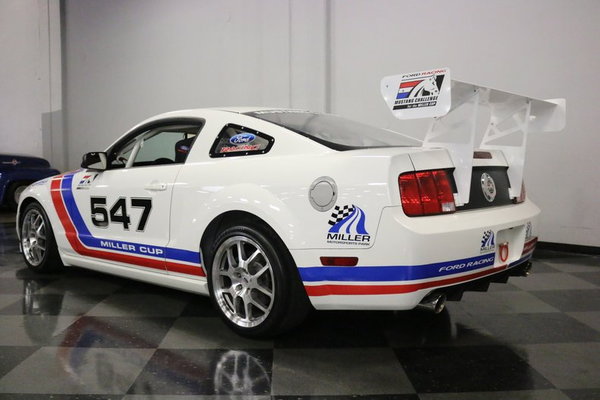 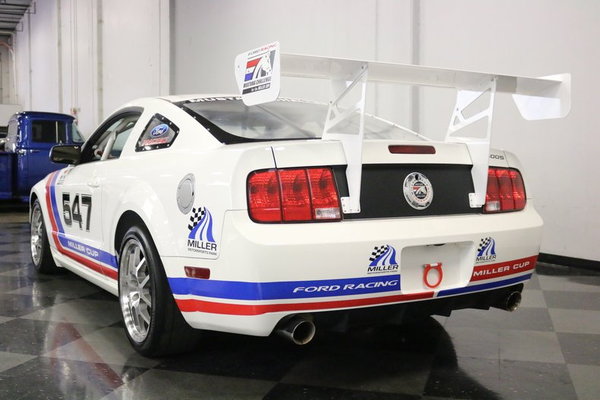 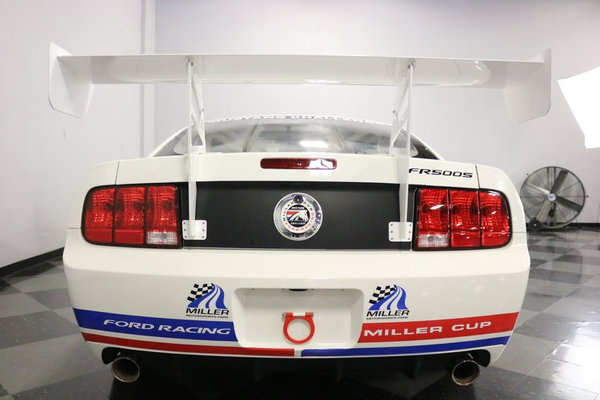 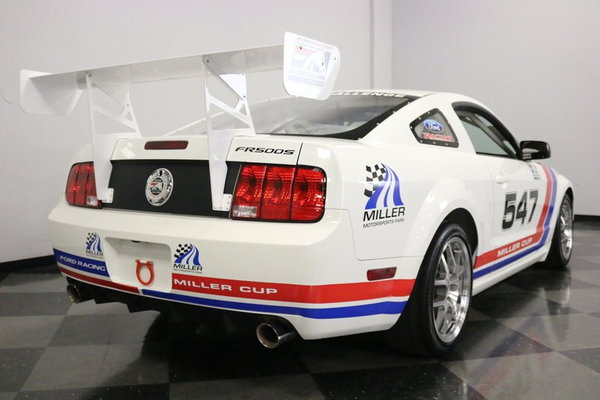 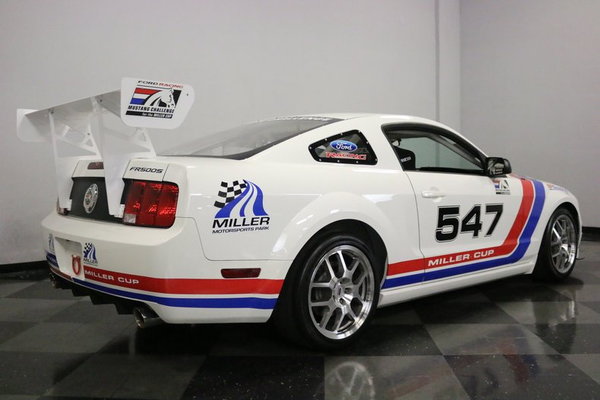 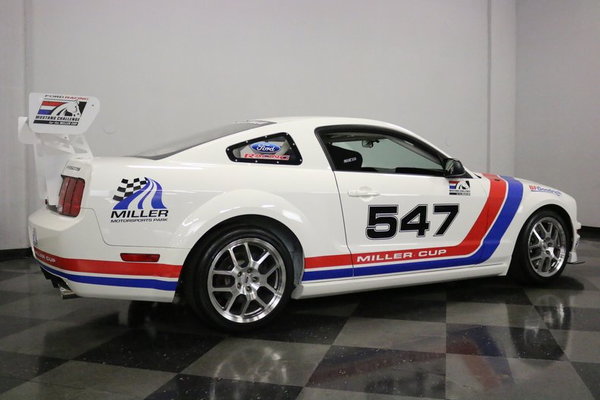 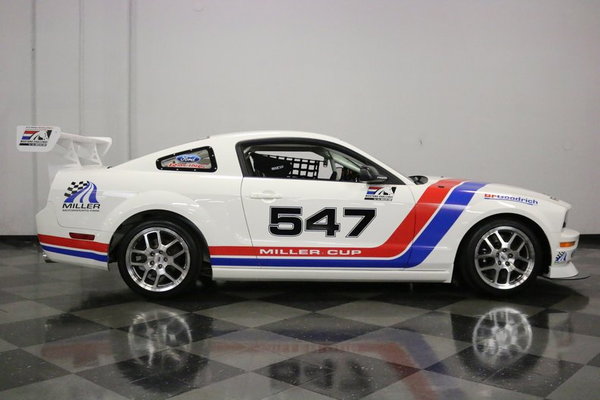 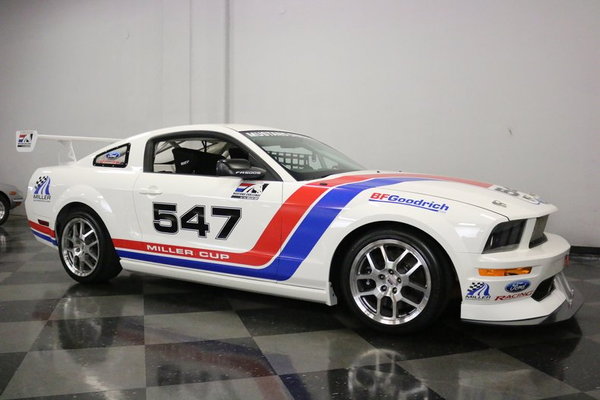 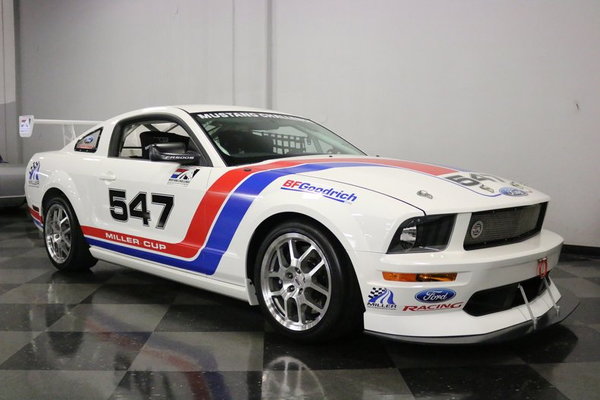 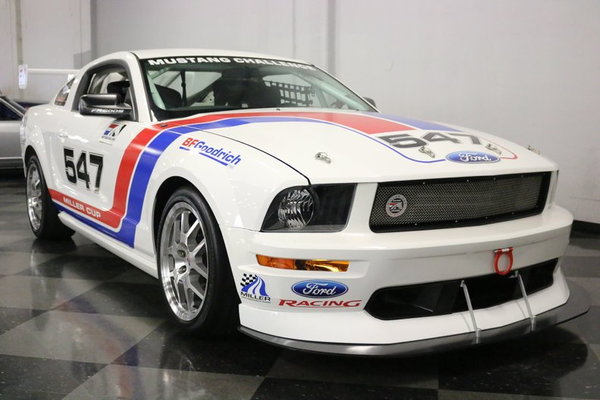 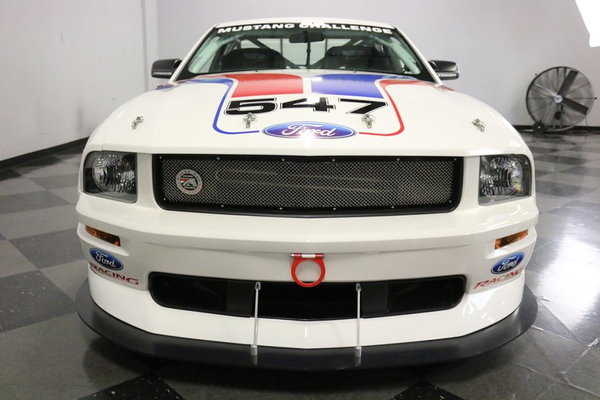 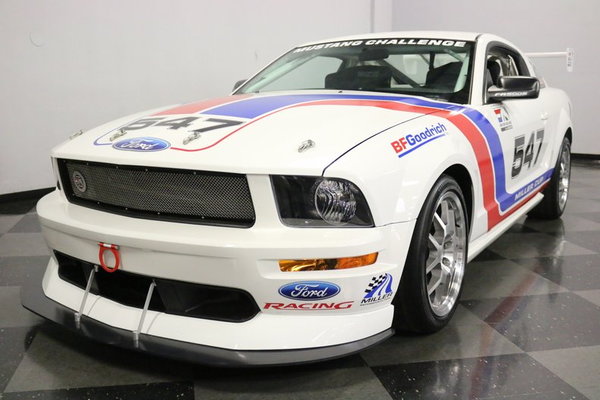 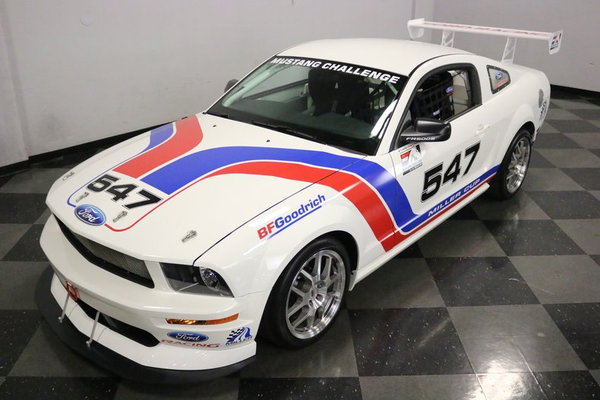 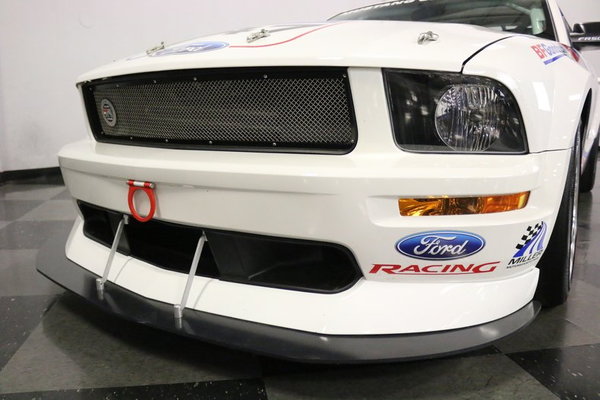 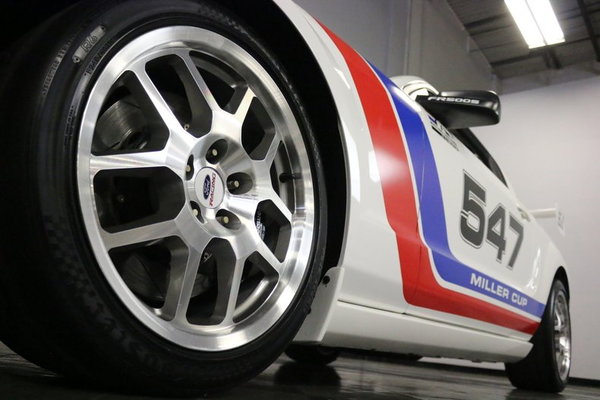 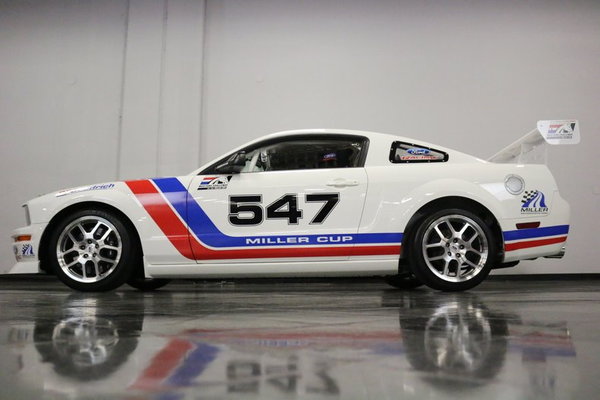 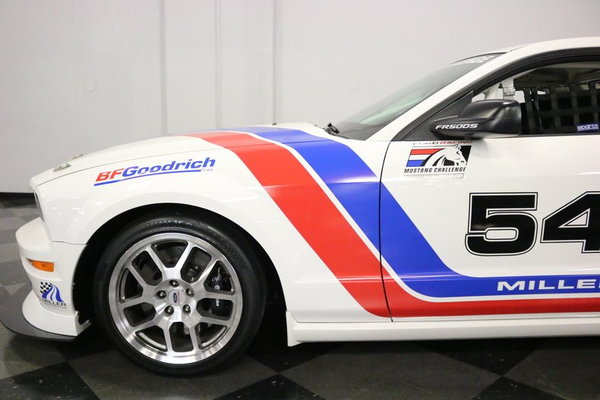 $47,995 Get Financing
Business Seller - Streetside Classics-Dallas/Fort Worth
Fort Worth, TX

This 2008 Ford Mustang GT FR500S is a purpose driven racer configured specifically for competition in the Ford Racing Mustang Challenge and carries a whole host of aftermarket modifications to ready it for such a grueling test. Rest assured, it's been spared from the wear and tear of such trials on the asphalt and after being tuned and perfected, it was ushered into protective custody, where it's been doted on ever since. It's also got some SERIOUS collectability - there were fewer than 80 of its kind made.

Upon first glance, you can easily see this is no ordinary modern-day muscle car. Its white paint, looking very clean and well-sheltered, is ornamented with an array of multi-colored decals and stripes, as well as prominent numbers on its doors, to proudly proclaim its unique, special edition status. You'll notice its lowered height right away, as well as a couple of other modifications to up its ability to cut through the wind - the aggressive air dam up front leaves no doubt it's there for more than just style and the wing in back reinforces the notion that this Ford is very much at home on the track. Unlike nearly all production car race projects, the FR500S's special configuration isn't the result of a journey to an aftermarket shop - it rolled off Ford's own assembly line in Flat Rock, Michigan ready for action on the oval. Because of the conscientious care it's received over the years, this GT retains all the visual impact it had when it first debuted, and the bright colors of its emblems and stripes are unfaded and very sharp.

The white confines of the interior have all the features of a bona fide racer - certainly appropriate, as that's exactly what this Mustang was configured to do. Because it tips the scales about 300lbs lighter than its normally-configured counterparts, anything that wasn't essential to either enhancing performance or maximizing safety is long gone. The pair of race-ready cloth Sparca buckets up front is the only seating you'll find inside, and when you assume the driver's position, you'll find yourself surrounded by a thick, sturdy full roll cage, with a collapsing column and competition steering wheel looming in front of you. There's more evidence of this Ford's serious intent on the dash area just beyond the column mounted MXL digital data acquisition system that places RPMs, water temp and oil pressure readings in close proximity - a series of toggle switches are recessed into the FR500S badged panel sitting front and center, labeled with their specific functions. The trunk area in back has been stripped of its furnishings to reveal cleanly sheathed, properly routed wiring leading up front.

A badged brace spans the shock towers to enhance rigidity, sitting just above a 4.6 liter V8 engine that remains in display condition. Armed with both intake and exhaust upgrades, it produces a documented 325 horsepower and teams with both a 6-speed manual transmission now navigated with an upgraded clutch and the short throw shifter inside, as well as a 3.73 ratio live axle Torsen differential that keeps both rear wheels firmly planted on the track. A high-capacity radiator has been added to help keep engine temperatures in check. The 4-wheel disc brakes have seen an upgrade of their own in the form of the 14" Brembos now sitting up front to properly dissipate heat, and the added adjustable suspension increases this special Pony's abilities on the track as it sits on a set of 18" Ford Racing wheels outfitted with Hoosier Drag Radial Tires.

This 2008 Mustang GT FR500S would be an absolutely sterling centerpiece to any Ford lover's collection. Call today!
View Full Description