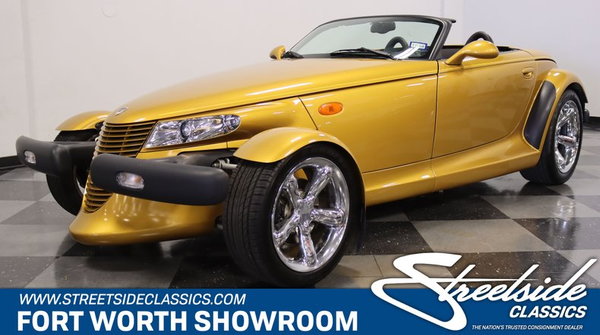 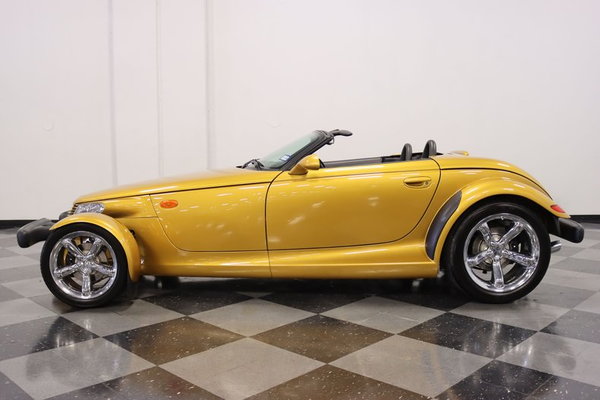 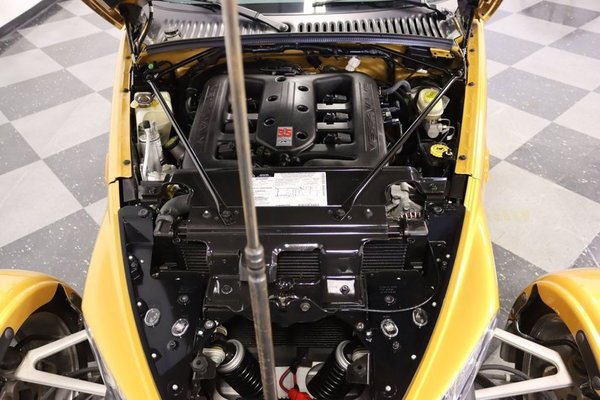 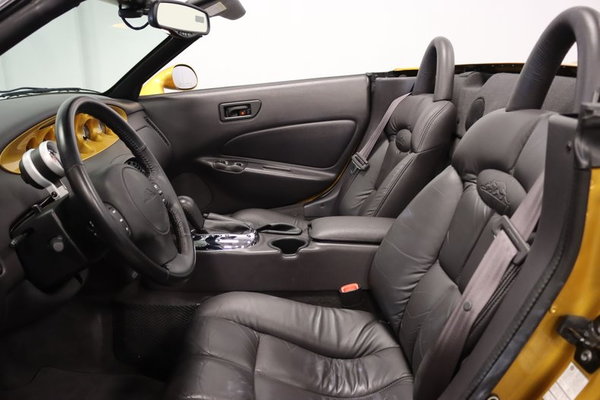 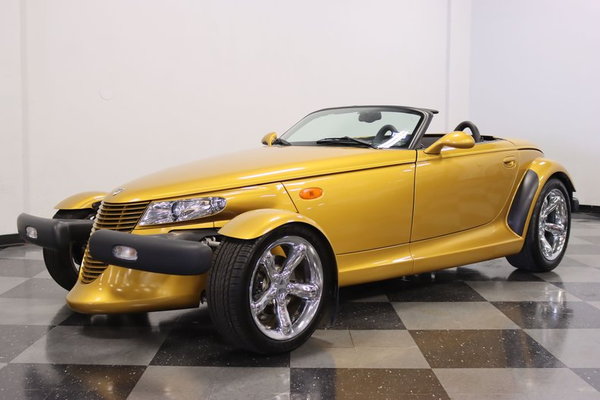 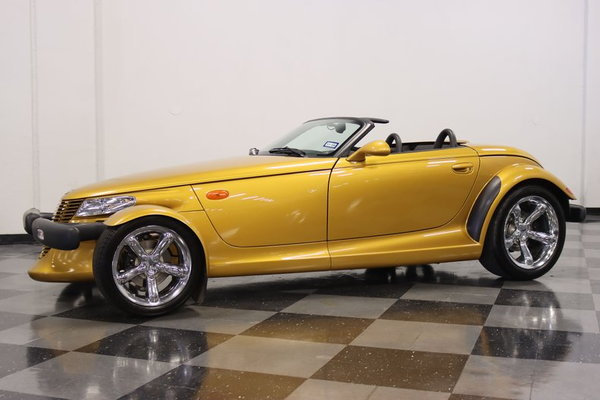 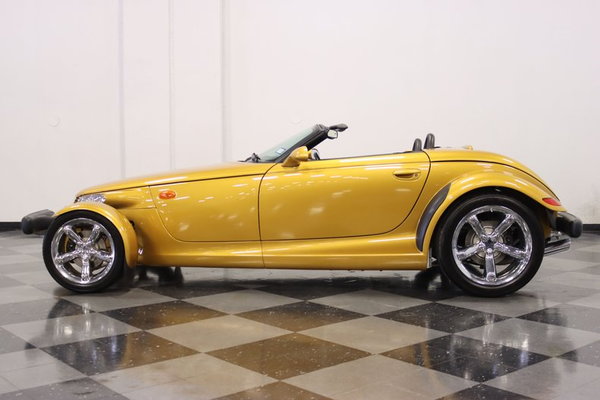 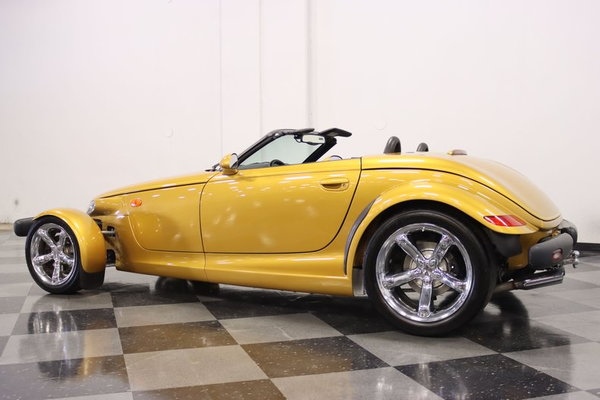 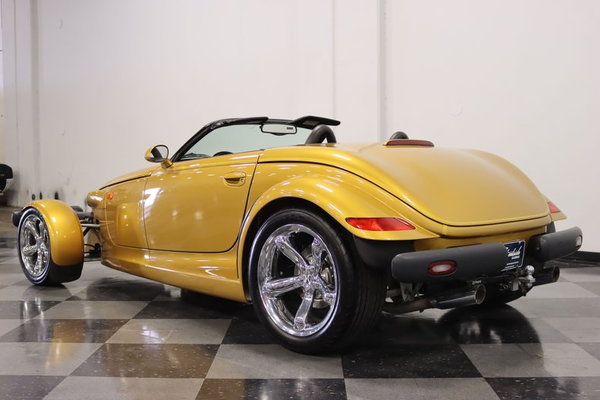 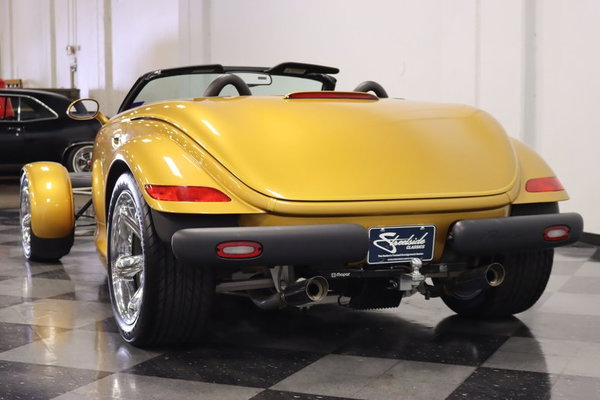 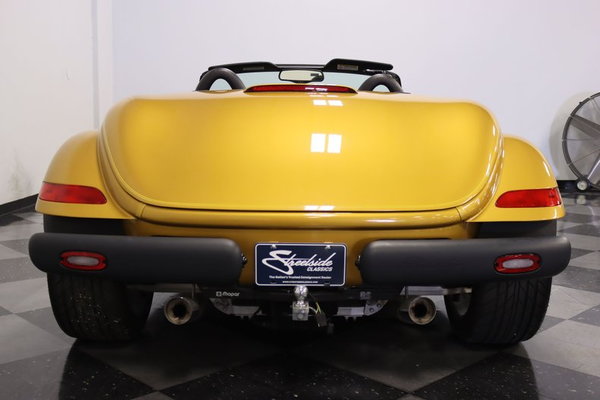 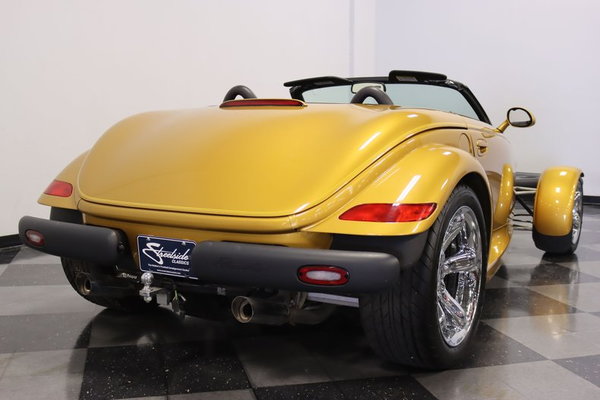 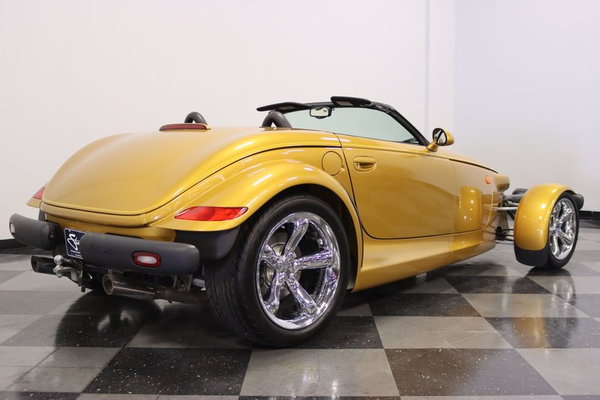 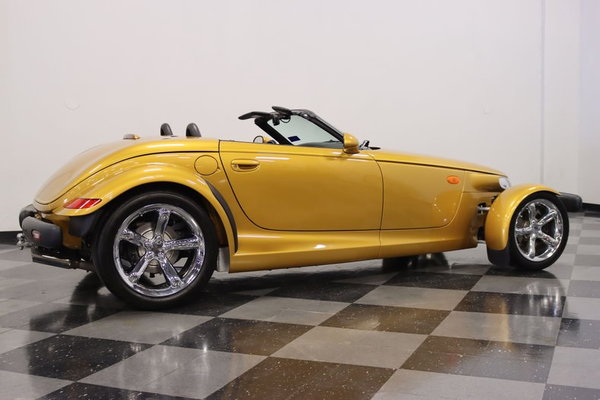 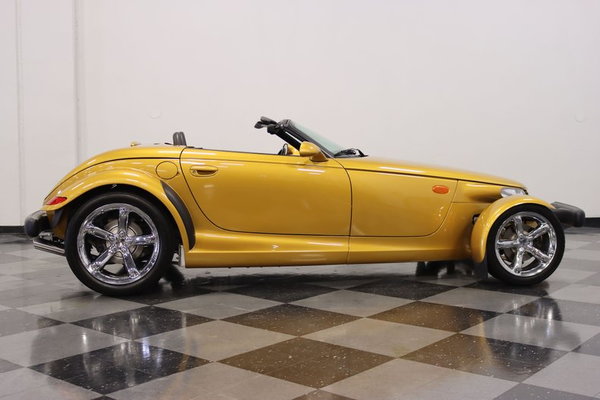 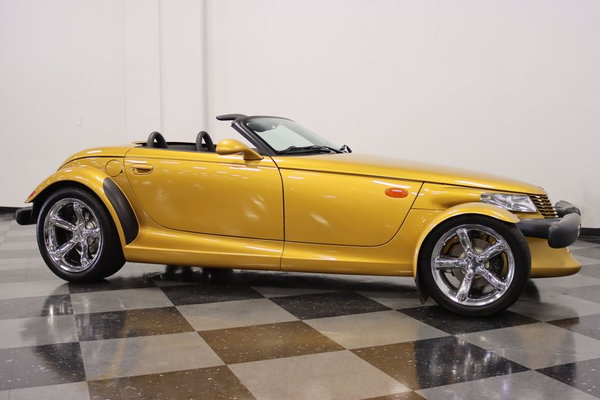 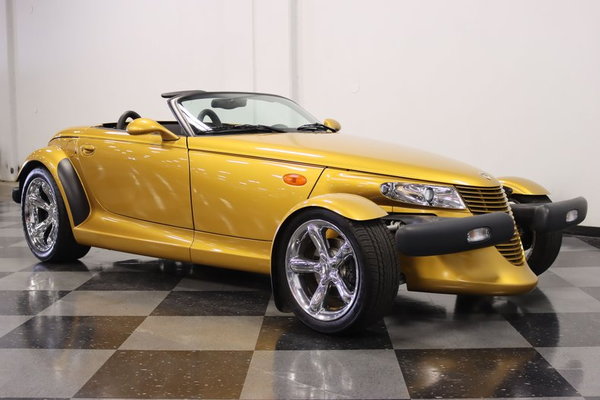 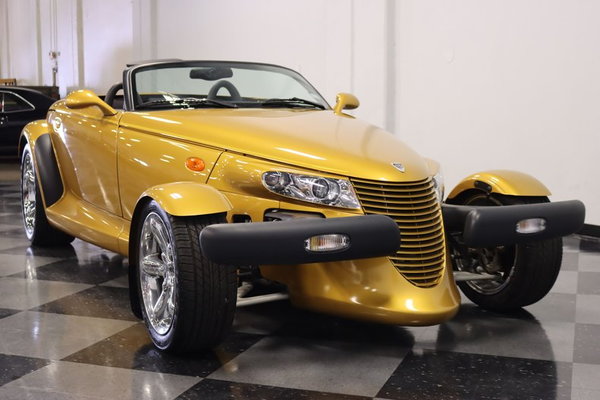 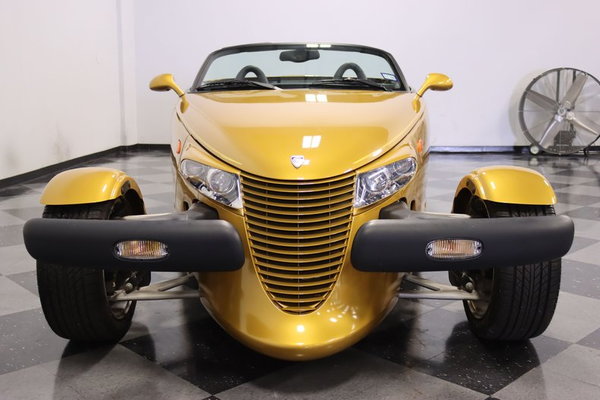 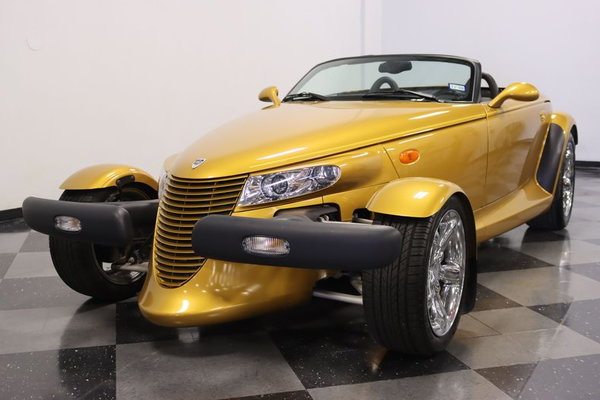 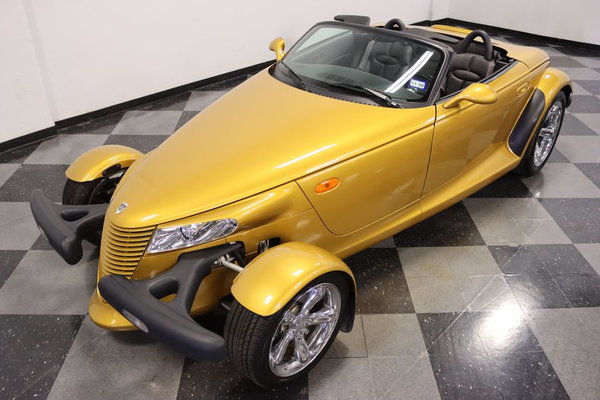 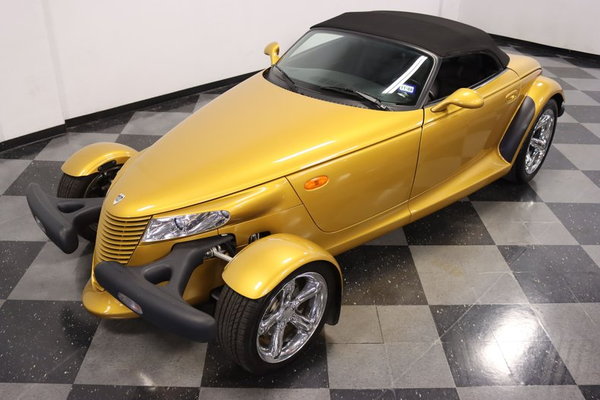 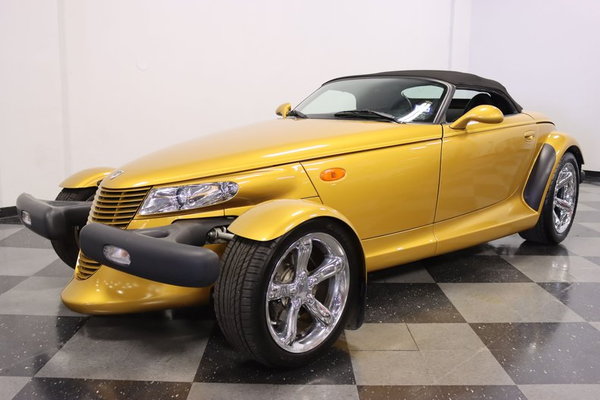 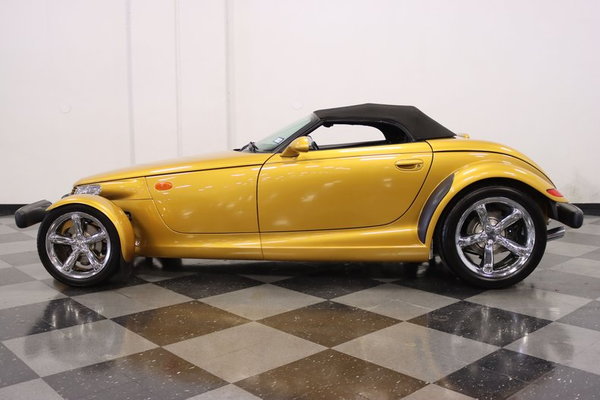 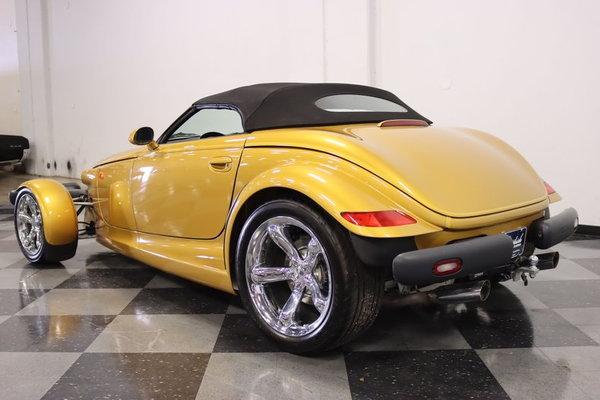 $48,995 Get Financing
Business Seller - Streetside Classics-Dallas/Fort Worth
FORT WORTH, TX , US

Designed as a test bed for new technology, the Prowler (initially the Plymouth, later the Chrysler) was a great exercise in corporate dream-making. Today, the later Prowlers are perhaps the most prized and their values continue to grow each year, suggesting that future collectability is a smart bet. In the meantime, you can own this ultra-low-mileage, final production year 2002 Prowler and have some fun with Chrysler's own in-house hot rod.

Finished in Inca Gold, this car is all about being the center of attention. Prowler sticker prices took a big jump between 1999 and 2002, suggesting that the car probably cost more than they were asking to build, and as an experiment in aluminum technology, Chrysler didn't seem to mind. Like most Prowlers, this one has led an extremely sheltered existence with just 1,058 miles on the clock, and if it's like its siblings, it's probably never even seen a raindrop. Fit and finish are very, very good thanks to the Prowler's virtually hand-built nature, and if there are blemishes on this car, they're almost imperceptible at a glance. The black front and rear bumpers were always a prominent part of these cars thanks to Uncle Sam's DOT rules, but the look just works, especially up against the vivid paint. As you might expect from the insanely low miles and 1-owner lineage, the paint is in fantastic shape, so you can confidently show it with pride. Oh, and we should probably mention the incredibly rare, factory-built matching trailer that comes with beauty, which is also finished in that awesome shade of Inca Gold- an option that almost nobody bought but which makes the Prowler a legitimate long-distance touring car.

The Prowler scored big points with its comfortable, feature-laden interior that still captured the feel of an old hi-boy roadster. Deeply sculpted black leather bucket seats are fitted with integral seat belts and roll hoops for a very trick look, as well as a Prowler logo embossed on the seat backs. They show practically zero signs of use thanks to the low mileage, as you'd expect. Hot-rod features include the steering-column-mounted tachometer and central gauge panel that is painted to match the exterior bodywork. Other goodies include powerful air conditioning, power windows and locks, cruise control, and Chrysler's fun Auto-Stick 4-speed automatic transmission with manual shifting. Everything works and it runs and drives like a real car, something that many home-built hot rods can't claim. There's also effective weather protection with a black canvas convertible top that looks like new and weather seals that were designed to withstand real-world conditions, something no home-built hot rod ever worries about.

The only engine available was a 3.5 liter HO MPI 24-valve V6, but thanks to refinements throughout the years, performance is quite respectable. It has a wonderful growl from the dual exhaust system and the years have proven that the powertrain is quite reliable and parts are still readily available. With the rear-mounted transaxle, weight distribution is excellent, giving the Prowler seriously agile handling and you'll never get tired of watching the front tires out there doing their thing as you drive. The fully-independent suspension rides well and the power 4-wheel disc brakes are powerful, and despite the hot rod look, it doesn't come with a hot rod ride penalty. Even the chrome wheels are outrageous: 17s up front and 20s in back, and believe it or not these are still wrapped in the 225/45/17 and 295/40/20 Goodyears this Prowler was born with, and they show almost no wear. Wow!

The Prowler is on every expert's short list of future collectables, and for a good reason. Prices are really starting to climb now, making this the ideal time to add a Prowler to your collection, and this is quite possibly the best you'll ever find. Loaded with its original window sticker, owner's manuals, and maintenance records, this is the one to buy if you're looking for a bonafide, blue-chip Prowler. Call today!
View Full Description