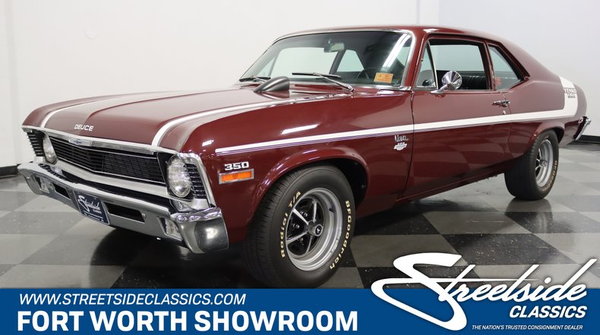 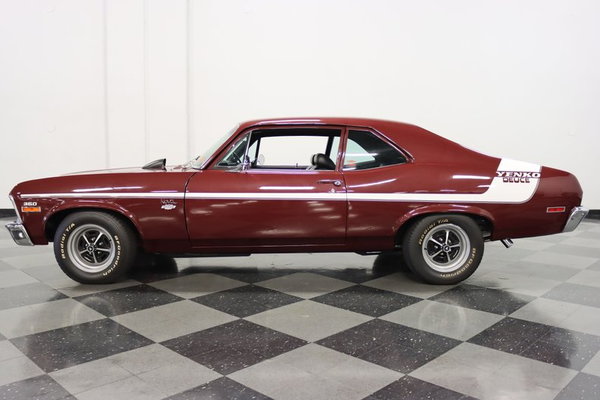 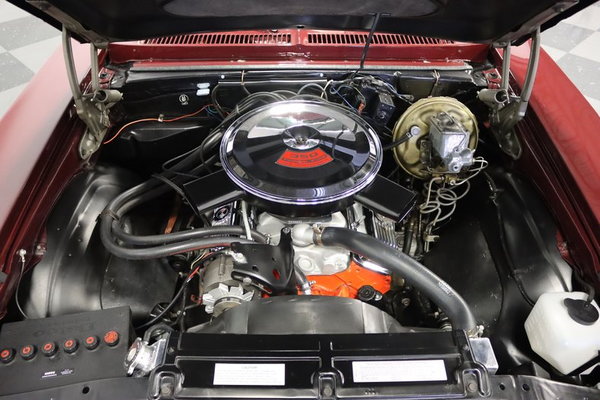 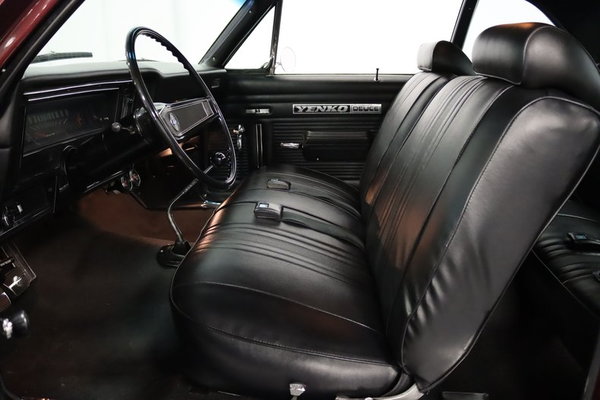 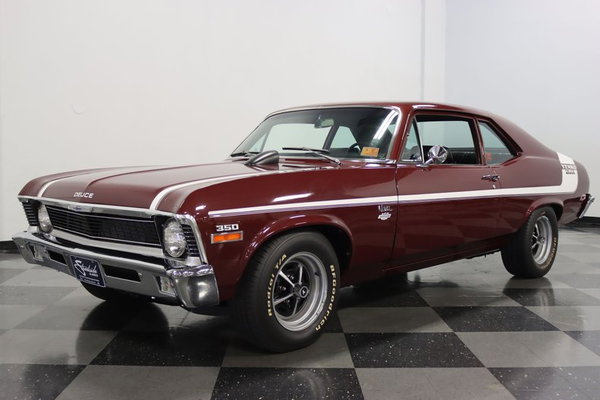 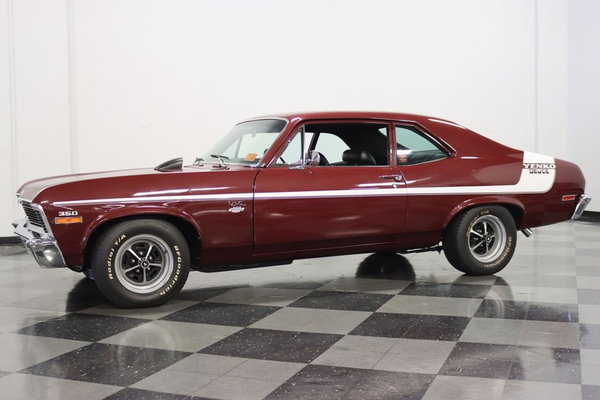 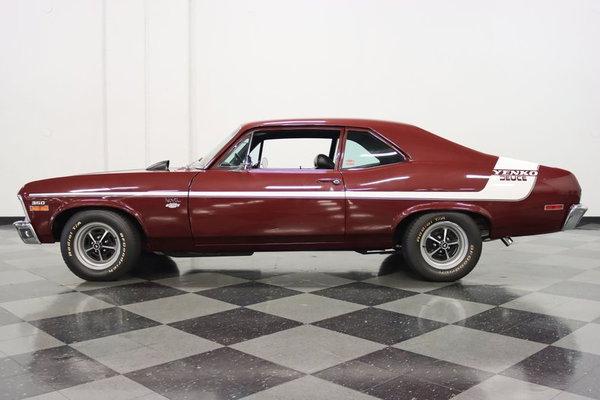 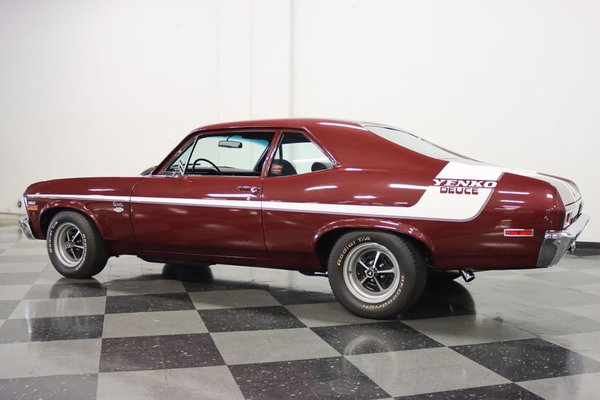 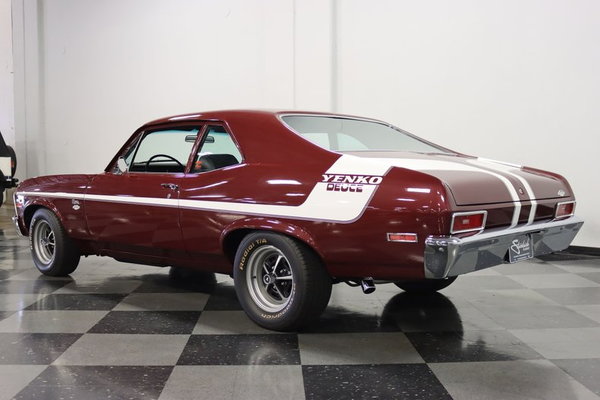 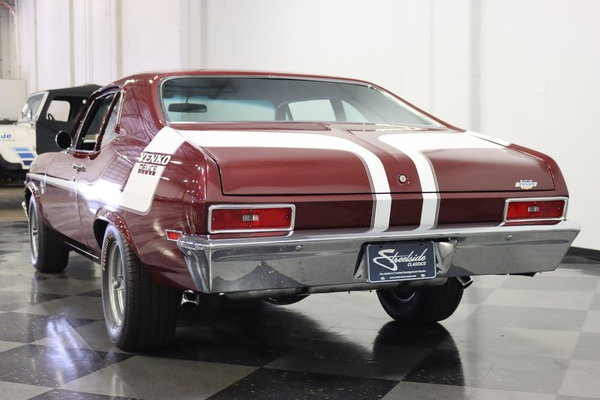 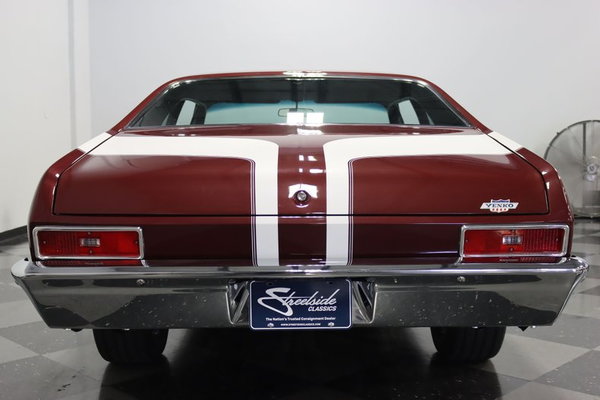 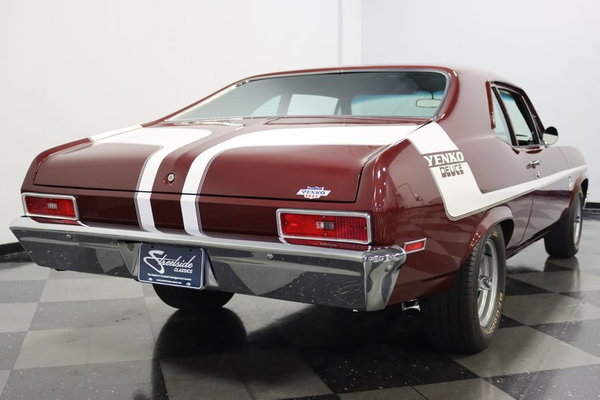 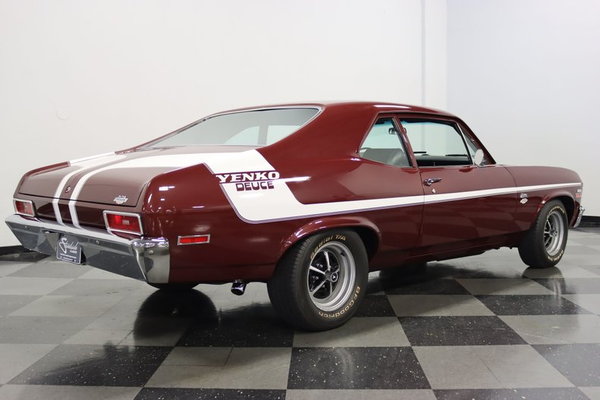 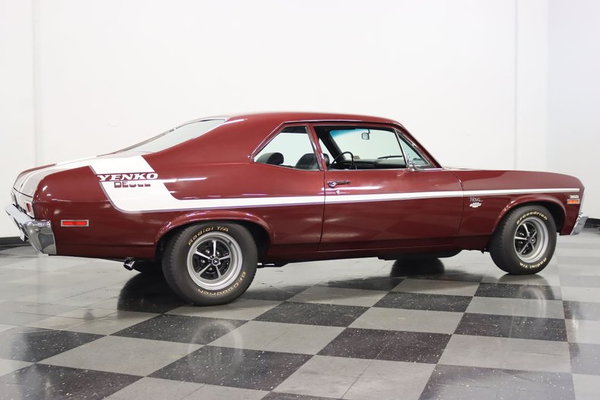 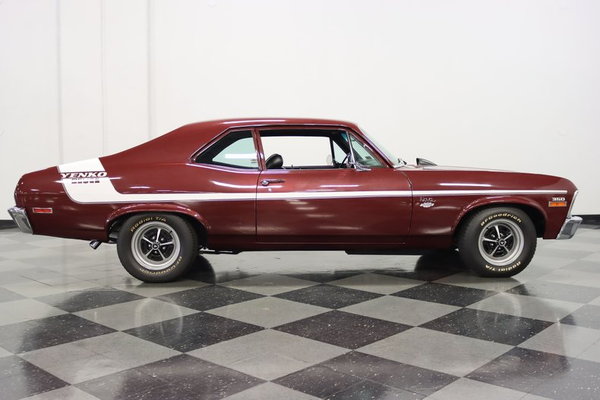 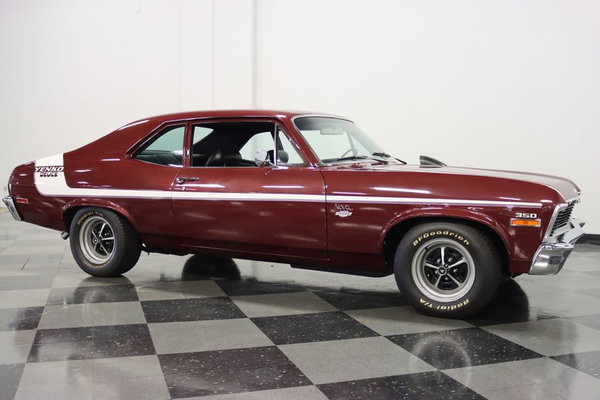 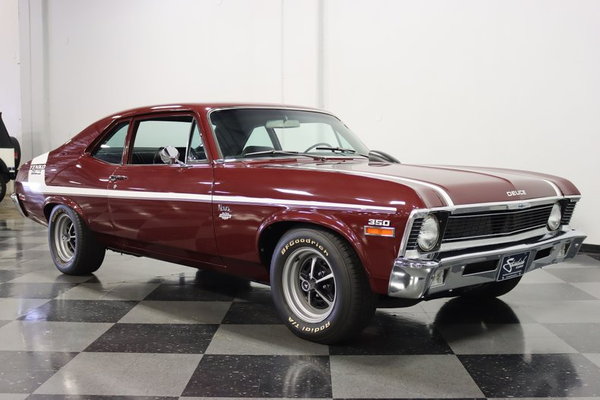 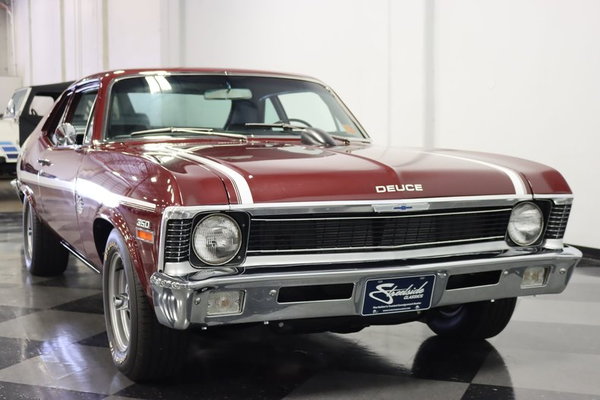 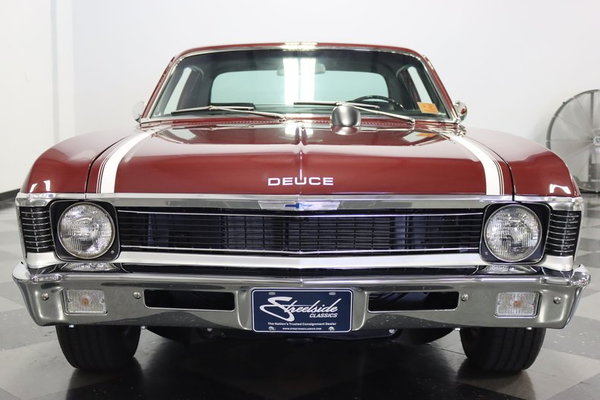 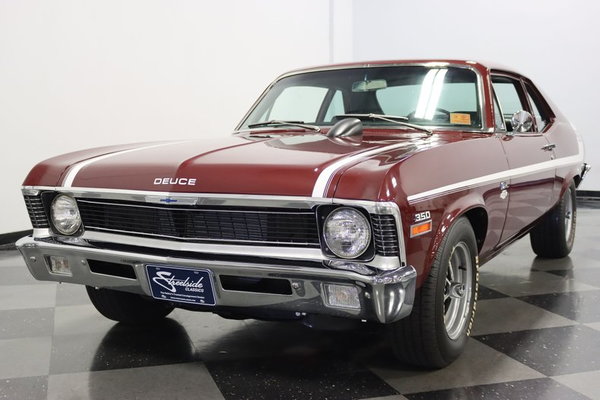 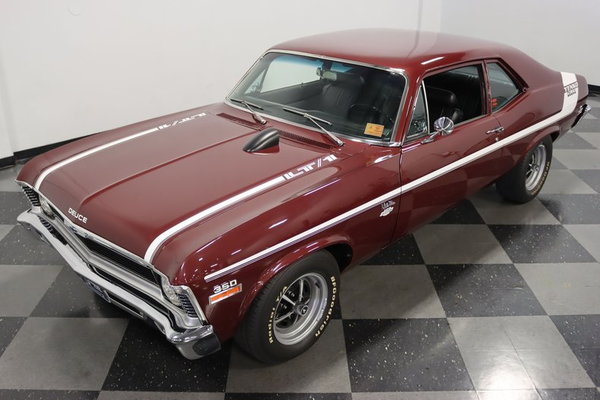 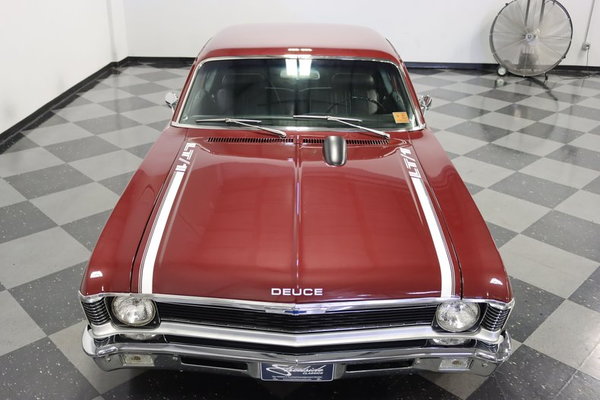 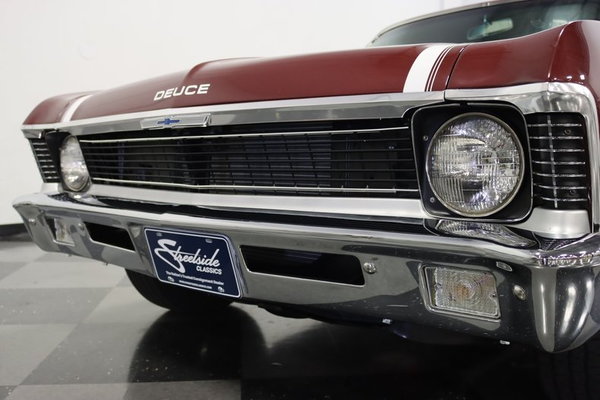 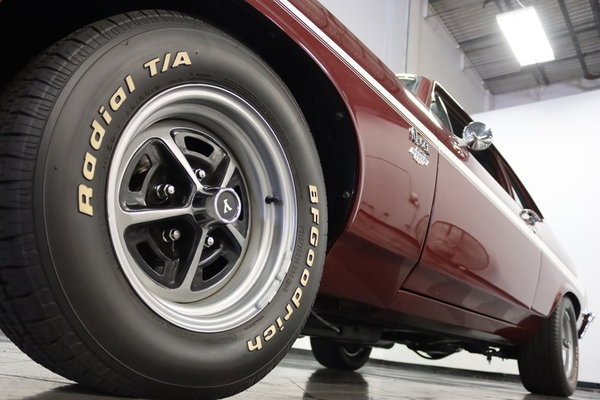 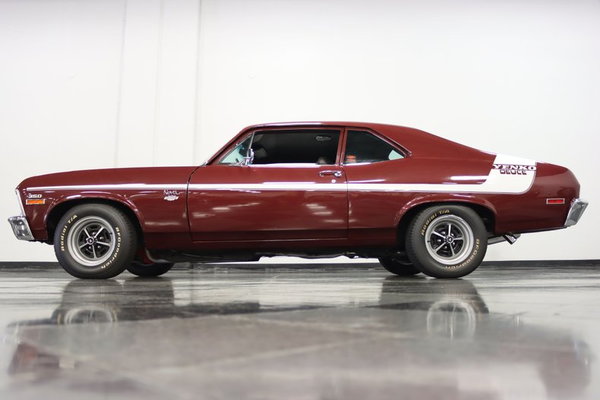 $51,995 Get Financing
Private Seller - streetsidedfw
FORT WORTH, TX , US

For some guys, going too far is what it's all about. Don Yenko was such a guy, and in the late-'60s he started stuffing 427s into the compact Nova and by 1970 he needed something that would fly under the radar and created the Deuce-a car that really should be kept in a cage. Since only 175 were ever made, you can imagine how expensive and highly sought the remaining ones are. So, what's a guy to do?
Well, you build your own, and you take some liberties so you can actually get out of that cage once in a while without terrifying the neighbors. This nut-and-bolt restored 1970 Chevrolet Nova SS Yenko Deuce Tribute gets the look just right: one part low-buck grocery-getter, three parts street brawler, and one part polished debutante. The result is more than just a dressed-up Nova SS with a few decals slapped on it, but a car that will get attention just for looking good. A lot of the credit must go to the deep Code 77 Black Cherry paint, which was professionally applied very recently and looks great today after only 467 miles on the build. Combined with the white Yenko stripes that run from the hood, profiles, and deck lid, it has a very polished and upscale look that works rather well here. Bodywork is great, especially when you look into the critical areas like the drip rails, which it better be because a dark finish like this will not hide most imperfections. Sure, it's not a perfect show car, but this one isn't garnering any complaints either, and quite frankly if you pull this muscle car into your local car show, it's probably going to be the nicest car there. If the decals aren't you're thing and you'd rather have that nice paintjob do all that talking, they can easily be removed, although if you even consider removing that awesome Dixco hood tachometer then we'll have to repossess this car. The blacked-out grille insert, bright chrome bumpers, and subsequent trim all look to be newer and provide a shiny contrast to the overall dark theme of the exterior. If you think the pictures make a bold impression, wait until you see this Nova in person.
The black vinyl interior remains mostly standard-issue Nova, albeit really fresh, clean and nicely trimmed and augmented with a few modern pieces. And of course, there's proper Yenko script emblazoned on the door panels which match the correct Basic Black bench seat up front that came standard on all the Yenko Deuces and the fresh black vinyl floor covering really dresses things up inside and helps insulate the entire cabin. The OEM-style Bowtie steering wheel is new and features an easy-to-grip rim that works well with the tall Hurst shifter in the floor, and they both add a sporty look to the otherwise simple surroundings. Factory gauges cover the basics of speed and fuel level, while a duo of AutoMeter auxiliary dials under the dash monitor oil pressure and water temperature, while the aforemetioned Dixco tachometer on the hood manages the revs. A newer AM radio was installed in the factory slot just for proper looks, but other than that, and like in most Novas, it's light on options which is the only way to fly if you're looking for maximum performance. Even the back seat looks great! The trunk is covered in durable spatter paint and features what could easily be the original poly-glass spare and jack set, and you can see that there's really nothing to hide here with the look of those super-solid panels.
For the Deuce, Yenko used the 350ci LT1 found in the Corvette LT1 and Camaro Z/28. This car is equipped with a 355/308HP V8 crate motor which gives it startling performance without the potential complications of an original motor, and it even comes equipped with a 36-month warranty. Although if those complications are worth their effort for you, the original, numbers matching 350 V8 is sitting on a stand at the owner's home and is available with the sale. It's obvious that good money was spent in the engine bay, from the bright LT1 chrome valve covers and air cleaner to the Chevy Orange block to the rumbling Flowmater dual exhaust note below. A Holley 4-barrel carburetor and Winters intake manifold are a combination that was perfected years ago, so the sucker runs superbly and with newer exhaust manifolds leading to that throaty exhaust, the torque curve is robust. A quick-shifting Muncie M20 4-speed manual transmission snaps off easy upshifts and is always read to drop down a gear and the heavy-duty 12-bolt Posi rear end has 3.31 gears inside, so no more wasted power. A quick peak underneath shows just how dialed-in and beautiful this Nova really is, with a beautifully painted frame and floor pans, and pretty much every single suspension component is brand new to the car. Power steering and power front disc brakes make the driving experience extremely enjoyable, and the stance is perfected from the Yenko wheels wrapped in staggered 215/70/14 front and 245/60/14 rear BFGoodrich T/A white-letter radials.
Beautifully restored with only break-in miles on the clock, this performance-packed Nova Yenko Tribute offers all the right ingredients. Yenko fans, Nova fans, Chevy fans, everyone can agree that this is a killer car. Call now!
View Full Description